China Weather Network News Today (June 19), my country's strong rainfall is still concentrated in the area from Guizhou to the northern part of the south of the Yangtze River. Starting tomorrow, the heavy rainfall belt in southern my country will gradually fall to the south, and the rainfall from the south of the Yangtze River to southern China will increase day by day. In terms of temperature, 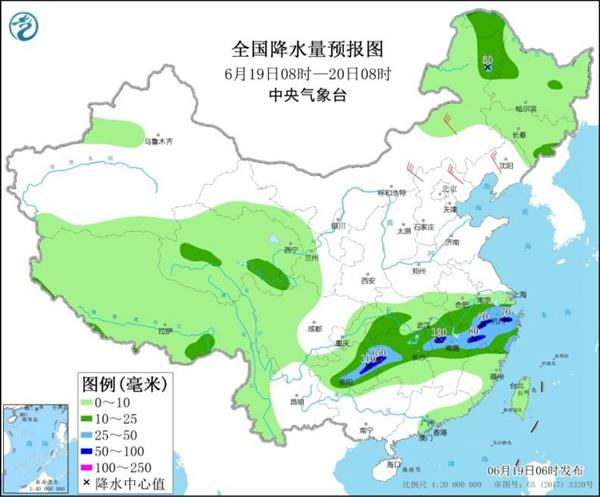 In terms of temperature, the Beijing-Tianjin-Hebei region may see a wide range of high temperatures today, the sultry Jiangnan took the lead to ease, and the high temperature in South China will continue until the beginning of next week.

Yesterday, the heavy rainfall in southern my country was mainly concentrated in the area from Guizhou to the northern part of the south of the Yangtze River. Heavy rains appeared in some areas; the "main force" of heavy rainfall in the north was in Inner Mongolia and Heilongjiang.

Today, the pattern of heavy rainfall in the south has not changed much. It is still concentrated in the area from Guizhou to the northern part of Jiangnan. However, starting tomorrow, the rain belt will gradually shift to the south. It is expected that from Jiangnan to southern China, rain will "enter" before June 25, partly The area is raining violently.

Tomorrow, the rain belt will begin to fall south, and there will be moderate to heavy rain, local heavy rain or heavy rain from Guizhou to Jiangnan.

From the day after tomorrow, the rainfall in southern China has increased. There will be moderate to heavy rains in parts of southern and eastern Jiangnan, western and southern Guizhou, central and northern South China, and most of Taiwan Island. Among them, southern Zhejiang, northern Fujian, and southwestern Guangxi have experienced moderate to heavy rains. Heavy rain (50～90mm) is local.

In the north, the rainfall in the northeastern region has gradually weakened today, but it should be noted that in the next two days, there will be strong winds of 4 to 6 in the central and eastern Inner Mongolia, northern North China, and Liaoning, and gusts of up to 7 to 9 in some areas. The local public Pay attention to forecasts and early warnings, and guard against wind when you go out.

In terms of temperature, the central and southern parts of North China and the Huanghuai area will still maintain a sunny pattern today and tomorrow, and the range above 30°C will expand day by day, but the high temperature areas will be mainly concentrated in the Beijing-Tianjin-Hebei and Henan area.

Here is a reminder that the friends in South China need to continue to do a good job in preventing heatstroke and cooling. Air conditioning, watermelon, and mung bean soup are all essential.