China News Service, Xi'an, June 19 (Reporter Mei Yi Taki Alina) A theater in Xi'an was accused of using real wolves to participate in a live performance show, which aroused public attention. In an interview with a reporter from Chinanews.com, the theater said that it was not wolves that participated in the performance, but dogs, and that safety measures were set up at the performance site. The F 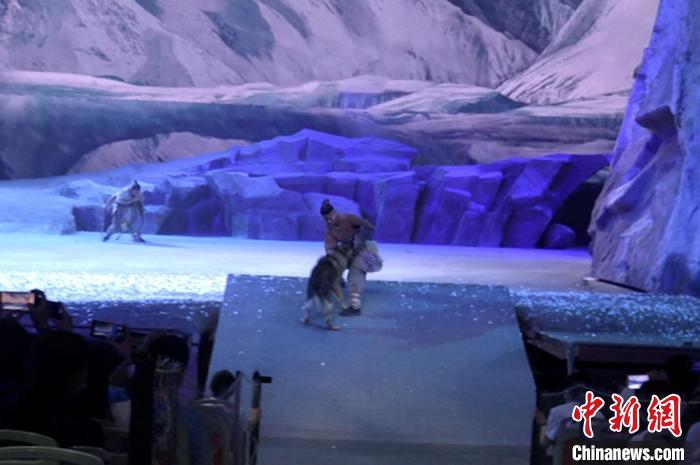 In an interview with a reporter from Chinanews.com, the theater said that it was not wolves that participated in the performance, but dogs, and that safety measures were set up at the performance site.

The Forestry Department of Xi'an City stated that the non-wild animals under investigation are canines.

Recently, a video related to the live performance show of "Legend of Camel Bell" has been circulated on the Internet. It is said that during the performance, a group of wolves participated in the performance under the guidance of the actors. During the performance, the wolves even rushed from the stage to the auditorium aisle and fell down. The actors bite, and even when viewed through the screen, the scene was quite frightening, with constant screams.

The picture shows the animal "biting" actors in the second act of the show "Legend of Camel Bell" "Wolf Road Distress".

"In the second act "Wolf Road Distress", the plot of the'wolves' pounce on the actors is a plot requirement and is a specially set link." Cui Mingwen, head of the management department of the "Legend of Camel Bell" show theater, said how many theaters are there. A safety guarantee measure. A safety reminder will be played before the performance to inform the audience that animals will pass by during the performance, so don’t panic.

In addition, the staff will lay protective nets on the routes the animals pass to prevent safety accidents.

During the performance, the animals and the dog handler perform one-on-one to ensure safety.

Earlier, a staff member of the theater who claimed to be the theater said in an interview with the media, “The performance is Siberian wolves. They have the blood of wolves and have been artificially domesticated.” In response to this statement, Cui Mingwen said that the current performance is actually Kunming. Dogs with relevant qualifications.

They are also verifying the identity of the staff member.

The picture shows Cui Mingwen being interviewed by a reporter from Chinanews.com.

The reporter saw in the theater that, under the guidance of the dog trainer, several animals participating in the performance demonstrated the ability to sit down, shake hands, and "snap and bite".

Qiu Yuli, who "interacts" with animals, is an actor and a dog trainer.

"Everyone has a wealth of experience, and there will be safety measures during the performance." Qiu Yuli said that they often interact with the dogs and trust each other.

The reporter saw at the performance site that before entering the second act "Wolf Road Distress" performance, the staff installed temporary protective nets on the animal passing area to ensure the personal safety of the audience on both sides, and informed the audience that animals are passing by, do not touch and tease .

During the performance, a group of animals shuttled between the stage and the aisle of the auditorium and "pushed" the camel worker played by the dog trainer.

The picture shows the animal certificate provided by the theater.

"When the'wolves' ran out, it gave people an immersive feeling. They cooperated tacitly with the actors, the performance was very natural, there were protective measures and safety tips around the performance, and there was no fear at the scene." Audience Zhao Lei said.

In order to further verify whether there are wolves in the theater, the reporter interviewed the Xi'an Chanba Ecological District Management Committee where the theater is located.

A staff member told reporters that there was a problem with the appearance of wolves in the "Legend of Camel Bell" show recently, and the theater has already issued them an explanation of the situation.

The next step will be to verify the specific situation with the Forestry Bureau and other relevant departments.

The picture shows the animals participating in the "Legend of Camel Bell" show.

The theater said that the staff of Xi'an Natural Resources and Planning Bureau (City Forestry Bureau) had gone to investigate.

Afterwards, the reporter contacted the bureau, and its staff told reporters that after investigation and verification, the theater's performance animals are canines, and because they are not wild animals, they are not under the supervision of the bureau.

It is understood that "Legend of Camel Bell" officially started in March 2018, with an average of more than 800 performances per year.