New cases in Guangdong involve escalation of epidemic prevention and control in parts of Guangshen, Foshan and Guan 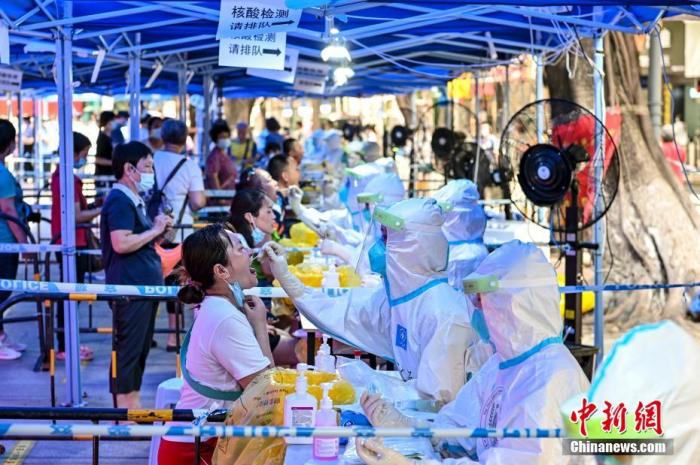 According to reports, the two new local cases in Guangzhou on the 18th were all from the 13th Lane, East Heyuan, Baihedong Street, Liwan District, which was listed as a high-risk area for epidemic prevention and control. They were all found from close contacts and isolated in hotels. During the test, the new coronavirus nucleic acid is positive, and he will be transferred to the hospital for isolation and treatment.

From May 21 to 24:00 on June 18, a total of 153 local infections were reported in Guangzhou in this round of the epidemic, including 146 confirmed cases and 7 asymptomatic infections.

According to a report by the Shenzhen Municipal Health Commission, the two new local cases in the city on the 18th were Zhu, a waiter in a restaurant at Shenzhen Bao’an International Airport, and Xiao, an employee of a company in Block A of Houhai Aerospace Science and Technology Plaza in Nanshan District.

Among them, Xiao lived in Baiyue Shangcheng, Nancheng District, Dongguan City, and his wife Li was diagnosed as a confirmed case of new coronary pneumonia in Dongguan on June 18.

Since June 18, New Blue Sky Apartment has been adjusted from a low-risk area to a medium-risk area.

A message circulated on the Internet on the 18th said that Shenzhen's airport flights have been cancelled on a large scale.

In the afternoon of the same day, Shenzhen Airport Group Co., Ltd. issued a situation report. After verification, as of 16:30 on the 18th, various airlines had dynamically cancelled 63 inbound and outbound flights during operation, and the flight operations were generally normal.

On the 19th, the Dongguan New Coronavirus Pneumonia Epidemic Prevention and Control Headquarters Office issued a message that since that day, Building 2, Baiyue Shangcheng Community, Nancheng Street, the city has been adjusted from a low-risk area to a medium-risk area.

Prior to this, on the 18th, Dongguan City carried out full nucleic acid tests on 5 towns and streets including Guancheng, Dongcheng, Wanjiang, Nancheng, and Machong, involving about 2.5 million people, and had activity tracks on 13 suspected cases of new coronary pneumonia. Closed management measures are adopted in key areas, entrances and exits are closed, and personnel cannot leave homes; residential communities within about 2 kilometers around the above closed management areas are controlled as closed areas, and personnel can only enter and exit; strict health management is implemented in the city, and citizens are not It is necessary not to go out.

In addition, since 19:30 on the 18th, all vehicles at the highway intersections in Dongcheng, Nancheng, Wanjiang, Macong and other towns and streets of Dongguan have been controlled and controlled. They only enter but not exit. The control measures will be changed after the nucleic acid test results.

A report from the Foshan Municipal Health Bureau on the 18th stated that between 0:00 and 18:00 on June 18, the city’s newly confirmed local case was an 83-year-old male. The community where he lived was included in the lockdown on June 4 Management area.

During this period, the case has undergone multiple rounds of nucleic acid testing, and the results are all negative.

On June 17, the staff in the same building as the confirmed case was subject to centralized quarantine medical observation as required.

On June 18, during the quarantine period, he tested positive for the new coronavirus nucleic acid and was later diagnosed as a confirmed case.

The Guangzhou Municipal Health Commission stated that although the sporadic cases that have recently appeared in Guangzhou have been found in centralized isolation hotels, before the centralized isolation, the cases had a relatively extensive history of activities in the closed and controlled area, and there may still be potential close contacts.

In addition to these few days, other cities have also found cases that were confirmed after being isolated for more than 14 days.

All these situations suggest that the areas where prevention and control measures are currently adjusted still need to be controlled.

During this period, Guangzhou will continue to conduct health monitoring for people in the prevention and control area for a period of time to prevent the epidemic from rebounding.