Movie review: In the heights - a wonderfully sumptuous musical

A wonderfully sumptuous film, a maxed out neighborhood party for two and a half hours. Caroline Hainer likes the musical In the heights which also addresses political issues of immigration and racism. 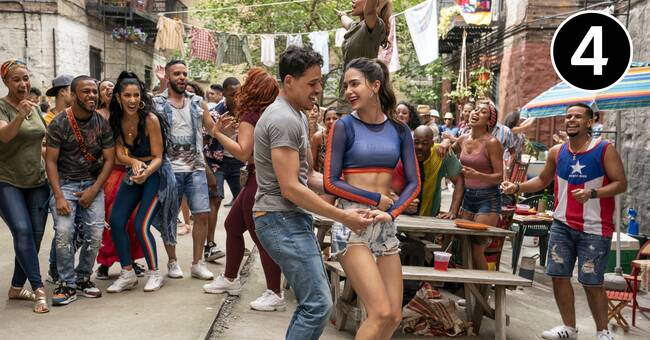 in northern Manhattan has been dominated by Latin American residents since the 1980s. There, Usnavi (Anthony Ramos) kneels in his bodega and dreams of one day returning to the Dominican Republic, which he left as an 8-year-old. He is not the only one with dreams. Vanessa (Melissa Barerra), Usnavis' love interest, when a secret desire to become a fashion designer and Kevin (Jimmy Smits) wants to be able to give his daughter the education he never received.

A dream can be a driving force as well as an escape from reality and in "the Heights" there are both varieties.

sad poetry in the theme, some of these dreamers are "dreamers" also in the political sense, ie children who came to the United States illegally. For them, the American dream simply means to stay in what is their homeland.

In the Heights is based on the musical of the same name from 2008, created by Lin-Manuel Miranda (he also played Usnavi on stage for several years). Miranda is also behind the hip-hop musical Hamilton, so it comes as no surprise that In the Heights mixes hip-hop among the otherwise Latin music styles such as salsa and merengue. Nor does it, like Hamilton, also address current political issues around immigration and racism.

a musical for our time. The genre's status has slowly but surely risen since the 2010s thanks to Oscar-winning La La Land (2016) via artist-based epics like Yesterday to rock biopics like Bohemian Rhapsody and Rocketman.

The comparison with La La Land is close, both films are united in the love of a place, the importance of dreaming big and also during bombastic dance scenes with elements of magic. If you want to sing dialogues, you can just as easily do it while dancing horizontally on the house walls or synchronized in a pool.

a wonderfully sumptuous film, a maxed out neighborhood party for two and a half hours. It is also a film without major conflicts. But it is possible to be forgiving, as well as the romantic view of community and love as a political force. It could be a dream in itself, that things can change if we just care a little more about each other and our neighborhood.