40 curators praised it. What is so special about this museum?

Chinanews.com, Nanjing, June 17th, title: 40 curators praised it, what's so special about this museum?   Author Cui Jiaming Yang Yanci Xu Shanshan   In Yangzhou, Jiangsu, there is a museum that became a "net celebrity" just after it opened. The Grand Canal Museum of China in the night aerial photography. Photo by Yang Bo   Here, there is a magical "room escape" hidden; here, the panoramic vi 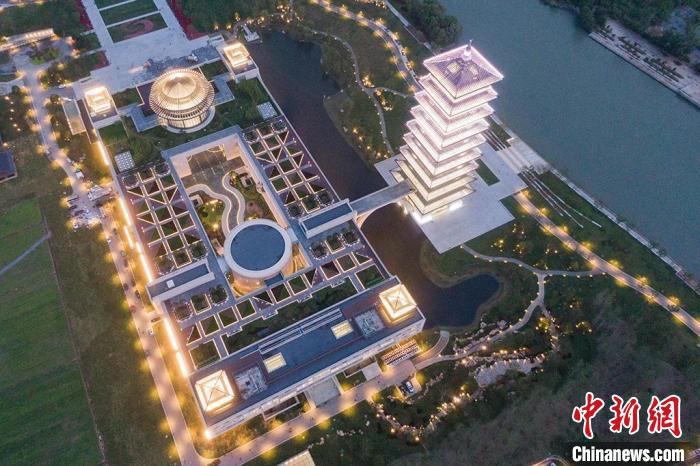 In Yangzhou, Jiangsu, there is a museum that became a "net celebrity" just after it opened.

The Grand Canal Museum of China in the night aerial photography.

Here, there is a magical "room escape" hidden; here, the panoramic view presents the "past and present" of the Millennium Canal; here, 40 museum curators gather to praise it and offer "old" heritage" New" heritage.

What is unusual about this museum?

The completion and opening of the pavilion is an important part of Jiangsu's promotion of the key construction area of ​​the Grand Canal National Cultural Park.

The Yangzhou China Grand Canal Museum was completed and opened on the 16th. More than 10,000 exhibits (sets) were unveiled.

The museum contains more than 10,000 pieces (sets) of various cultural relics exhibits reflecting the theme of the canal from spring and autumn to the contemporary era, displaying the canal culture in all directions in the whole river basin, all time period.

Viewed from the air, the museum adopts the shape of a giant ship with sail elements and is "stationed" on the bank of the Sanwan Ancient Canal in Yangzhou.

This "great ship" braved the wind and waves, set sail, and opened the canal version of the "encyclopedia".

The Grand Canal Museum is organized and operated by the Nanjing Museum. It is a museum that fully reflects the history of the Grand Canal, the current state and the beautiful life of the canal.

Although it is a new hall, the exhibits are very rich and "material."

The preciousness of the Grand Canal lies not only in the material remains that have been circulating for thousands of years, but also in the intangible cultural heritage left by the "fireworks on earth" on the canal.

According to Gong Liang, the director of the Nanjing Museum, a museum in the Grand Canal National Cultural Park is now in front of the public. There is a beautiful museum environment like a park, a museum building in the style of the New Tang Dynasty, and a whole basin, all time, all The azimuthal museum exhibition highlights the thousand years of age and contemporary image of the Grand Canal.

So far, the museum has collected more than 10,000 pieces (sets) of various cultural relic exhibits, including ancient books, calligraphy, and inscriptions reflecting the theme of the canal from the Spring and Autumn to the contemporary era.

The Grand Canal is a flowing and living cultural heritage.

Unlike traditional museums where exhibits are piled up, this museum focuses on the living inheritance of historical and cultural heritage, making the old canal look like a "new" life.

In the exhibition hall, the public can "travel time and space" to see the "past and present" of the Sui and Tang Grand Canal, the Beijing-Hangzhou Grand Canal, and the East Zhejiang Canal. They can also experience the natural ecology of water conservancy projects along the canal, water transportation, and public life, and experience China The historical accumulation and cultural features of the Grand Canal Basin.

The museum fully uses modern technology to introduce 5G, VR, etc. into the ancient canal, bringing a brand-new sensory experience to the public.

In the future, the Grand Canal Museum will provide the public with a place that is both fashionable and fun, and can fully understand the culture of the Grand Canal.

The picture shows the "Jumu" Laobianhe river section on display.

There is an "Escape Room" in the Grand Canal Museum

Among them, "The Lost in the Canal" is not so much an exhibition hall, but also a "room escape" game.

This place is specially designed for young audiences. It is presented in a fully open experience space in the ancient style and two-dimensional style that young people love. Through the "escape room" game mode, the audience can learn about the canal hydraulic technology, experience the fun of canal exploration, and appreciate the canal along the canal. Scenery.

Whether it is a book, a map on the table, or even a memorial, they are all related to the Grand Canal.

During the experience here, the audience can also learn about history, geography and humanities.

Through the naked-eye technical concept of "technology + art + culture", it highlights the flow effects of sound, light, electricity, shape and color, and creates a creative and innovative immersive experience.

On the opening day, academicians and experts from all over the country, as well as the directors of the Zhejiang Provincial Museum, Hebei Provincial Museum, Kaifeng Museum and other museums, gathered together on the banks of the Sanwan Ancient Canal in Yangzhou to support the modern inheritance of the ancient heritage. .

Shan Jixiang, president of the Chinese Society of Cultural Relics and dean of the Palace College, believes that the protection of the Grand Canal has moved from cultural relics protection to cultural heritage protection after thousands of years.

Today's protection of the Grand Canal is a huge and "inexhaustible" system. The object of "cultural protection" is not just static cultural relics, not only the protection of the river, but a complete chain from ancient times to the present.

Professor Li Xiaocong, director of the Research Center for Historical Geography and Ancient Maps of Peking University, believes that the Millennium Canal reflects the rise and fall of dynasties and is a portrayal of economic and cultural prosperity.

The protection of the Grand Canal needs to involve many aspects such as the old relics of the canal, water quality maintenance, and cultural heritage.

The shocking effect of the museum allows the public to "walk into" this period of history immersively, which is of great significance to the protection of the contemporary heritage of the Grand Canal.