End of cages in animal husbandry with opposition from ranchers: "Will drive thousands of farms out of the market"

Rearing farm animals in cages has its days numbered. A few days ago the European Parliament's Committee on Agriculture spoke in favor of its ban ... 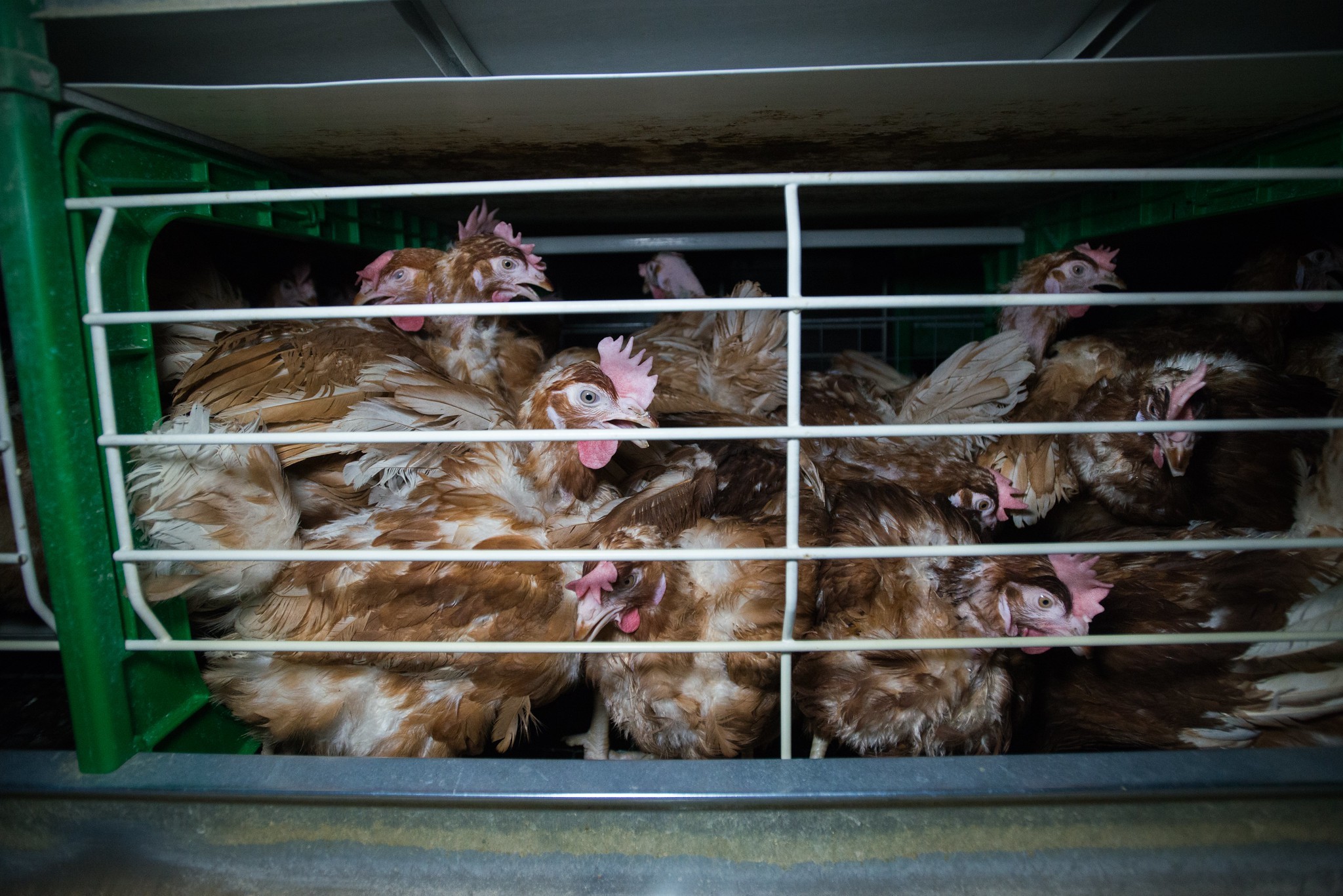 Rearing farm animals in cages has its days numbered. The European Parliament's Committee on Agriculture has ruled a few days ago in favor of its progressive ban after the publication of an impact assessment by the European Commission. This popular initiative has the support of

almost 1.4 million signatures from all over the EU

(more than 85,000 from Spain), demands that "put an end to the inhumane treatment of hundreds of millions of farm animals in the EU, kept in cages for most of their lives. "

, as this movement is called. In fact, with an overwhelming majority of MEPs -558 votes in favor and 37 against- this past June 10, the resolution came forward in the

to end animal cages in 2027. With this broad support, the

It must now legislate in this regard to review the rules on the protection of farm animals in order to prohibit this practice after a transitional period and a 'species by species' study that takes into account the characteristics of each one of them.

The claim urges to prohibit the use of cages for the rearing of laying hens, rabbits, pullets, breeder broilers, breeder laying hens and quails;

and stalls and individual pens for calves.

In any case, MEPs consider that this project has to go ahead

with adequate support for farmers

, who reject the project.

For this, Brussels proposes the incorporation of training and advisory services, incentives and financial aid "before proceeding with a legislative change" in order not to suffer unfair competition from third countries that have "less strict" animal welfare standards and thus avoid the relocation of local products.

have participated in this initiative, among them the 'Animal Equality' foundation, which calls for the revision of the 1998 Directive on the protection of farm animals in line with the philosophy already launched by the Commission on the

and the 'Farm to Table' strategy.

During the debate, organized jointly by the Agriculture and Petitions committees of the European Parliament (EP), the European Health Commissioner,

, stressed that the large number of support achieved reflects how the use of cages in animal husbandry "worries a lot on European citizenship ". In this sense,

, Commissioner for Agriculture and Rural Development, assured during the debate of this initiative that the agricultural subsidies of the EU (the CAP) and the Recovery Fund "can also be used in part to phase out cage farming and apply alternative methods "and confirmed:" you have the full support of the European Commission to carry out this transformation. "

MEPs called on the European Commission to now draw up a European Union (EU) bill on "fair and sustainable" agriculture and to propose a revision of the current EU rules on the protection of animals raised for farming.

These legal changes would phase out the use of cages in EU animal husbandry, after an appropriate transition period, possibly by 2027. "Alternatives to cage farming exist and are being implemented successfully in several member states", they warned during the debate, where a majority of deputies showed their willingness to support "more sustainable and less intensive" livestock.

According to data from 'Animal Equality', in the EU each year more than 300 million animals in the EU "are forced to endure

a miserable life locked in cages

, a cruel and completely unnecessary practice," according to

, president of this foundation. 92 million of them suffer it in Spain, which is the country "with the highest number of animals locked up, a reality that in the 21st century must change, since European citizens demand animal welfare". In his assessment, the cage system "is one of the cruelest practices in the livestock industry and completely incompatible with animal welfare." The problem, he continues, is that most cages are "sterile, narrow and do not allow animals to move freely; they are cruel and completely unnecessary."

Barquero considers that, if Brussels finally approves the project, "it will be a historic day for animals." "It all comes down to political will and some countries can make this transition faster than others, although it is clear that ending cages is something that

". The head of the foundation considers that the maxim that governs industrial farming is" to obtain the maximum benefit at the minimum cost and this logic, applied to animals, has devastating consequences for their well-being. "In this context, she assures that confining animals in cages "is directly linked to this vision of animals as commodities because the economic benefits increase making the life of the animals a real hell: crammed in cages in which they cannot develop any natural behavior."

The alternative to cages proposed by these protective associations involves "the implementation of other systems, for example ground breeding for chickens -which is already the majority in Europe-, park breeding for rabbits ...".

He also explains that the transition towards alternative systems to cages "is the responsibility of governments, companies, NGOs ... and obviously it must be accompanied and supported at all levels. It is not something that only farmers can do," he reasons.

A diametrically different vision is provided by the affected farmers, mainly those with small farms, who

would be expelled from the market

- they denounce - in favor of the large industries, which would have more possibilities to be able to reconvert their production processes. The agrarian organization COAG calls the initiative a "brutal reconversion in animal welfare, pushed by the animalists, a few years after another similar one that ruined 4,000 farms" after warning what they consider to be "strict demands from the activists who can drive the farmers out of the market. small farmers, emptying Spain, promote industrial livestock, the only one with resources to face the reconversions, while increasing the price of meat to the consumer and multiplying the use of antibiotics ".

The organization recalls that the intensive livestock sector made a "brutal reconversion in 2013 and 2018", imposed by community directives inspired in turn by demands of animal groups. The farms invested in all kinds of structures to improve the quality of life for the animals. For example, in the pig sector, the costs were between

(there are more than 2.5 million individuals in Spain). The average investment figure was approximately € 700 million.

In poultry farming, the 2018 reconversion amounted to more than 200 million only in egg-producing farms.

In addition, in some cases, such as pigs, the investments that were made had amortization periods that go up to 21 years.

The balance was devastating: the number of farms in the sector has plummeted in the last decade.

In other words, the farms are larger, more industrial and accommodate more animals in less space.

THE GARDENERS OF EUROPE

, farmer and coordinator of COAG Castilla y León, sees the news coming from Brussels with "enormous concern" and maintains that "this strategy does not seek to defend animals and will end 68,000 farms in the coming years" while defending the system: "cages are necessary, essential for the management of livestock production and if they eliminate this we will not be able to bear it, and it cannot be allowed; it is a very serious problem". For Pérez, "they are going to turn ranchers and farmers into the gardeners of Europe, that is the only reality" and he warns that "this good spirit that animalists proclaim

will end up making the agricultural sector disappear

because, from our experience, we already know that the necessary aid that they claim to promise us for the conversion will never arrive: we are tired of hearing about aid for improvements that never occur ".

The representative of COAG also denounces the risk of disappearance of what has come to be called the 'Empty Spain', the rural world: "we are already few, but with these attacks on our economy we are going to be less and less until we no longer there are none left, there is no population. "

"That speech that politicians try to sell us is completely false, they are only lies; they have abandoned us," he denounces.

"Although we are going to die fighting and when we have no strength left we will have dignity.

Environment Greenpeace criticizes the Spain Can de Sánchez plan: "It does not guarantee a green recovery"