Nicklas "Nifflas" Nygren has made headstrong and experimental games with a small budget for almost 20 years. The latest is called Ynglet and is no exception. A meditative musical journey where you play an organism that slowly winds its way from one abstract form to another.&nbsp;&nbsp; 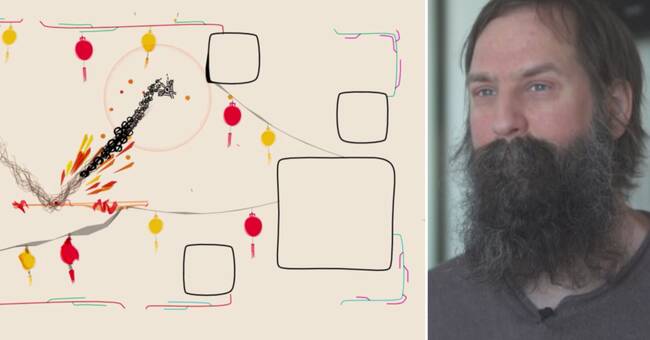 As a player, you take on the role of a kind of space dolphin that jumps between different abstract shapes.

It all takes place in a two-dimensional world drawn by hand by the artist Sara Sandberg.

- The fry is an abstract version of nature where you jump around between different bubbles and leaves and microorganisms in a single mess, says Nicklas Nygren.

A meditative gaming experience that can be adapted in difficulty to the player's needs.

The hope is to attract unfamiliar players.

- It is very easy in the simplest degree of difficulty and very challenging in the most difficult.

Everything the player does becomes music

With the exception of Sara Sandberg's Joan Miró-like illustrations, Nicklas Nygren himself has built the entire game from the ground up.

Everything from programming to the music produced with his own music program and various pre-programmed music algorithms.

- Everything the player does in the game becomes music.

All notes and melodies are chosen by what the player does and you become a co-composer of the music, he says.

Far from the commercial gaming world

took inspiration from Tove Jansson's story Who can comfort Knytt.

He is a good distance from the commercial gaming companies and many of his early games are available for free.

Is it possible to make money on this type of game?

- It is difficult, the market has so many incredible games now and you do not know what will work or not.

No matter what you do for games today, it's a gamble.

Then it is just as good to make the type of game you like.