Action movie star Donnie Yen: On the big screen, how do you aspire to the "jianghu"?

China News Online, June 15th, title: Action movie star Donnie Yen: How do you win the title of "Jianghu" on the big screen?   Author Wang Ji   Donnie Yen is very busy. As the promotion ambassador of "One Belt One Road" Film Week, promoted the new film "Rage: Serious Case", held a "master class" to share the experience of light and shadow... a rich itinerary, let the "Chinese Action Movie" repr 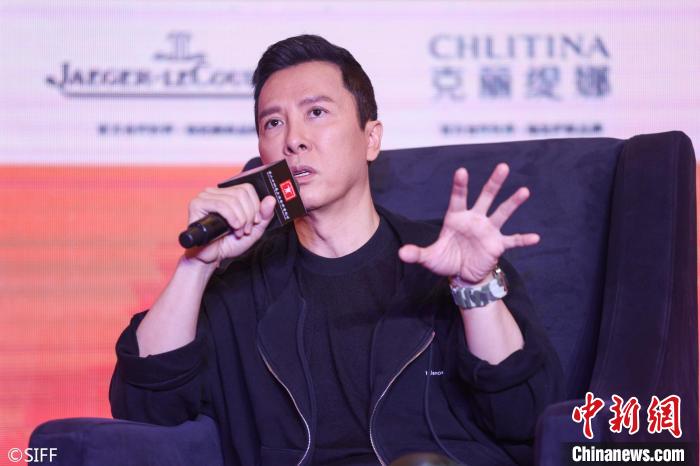 China News Online, June 15th, title: Action movie star Donnie Yen: How do you win the title of "Jianghu" on the big screen?

As the promotion ambassador of "One Belt One Road" Film Week, promoted the new film "Rage: Serious Case", held a "master class" to share the experience of light and shadow... a rich itinerary, let the "Chinese Action Movie" represented by him in the 24th Shanghai International Film Festival The festival ushered in a "highlight moment".

Since then, "Kung Fu Movies" have stood firm in the world of cinema as a new style.

Donnie Yen is also known for his "Kung Fu Movies".

He has inherited his mother's martial arts talent since he was a child and has integrated Chinese and Western martial arts. He is the most representative character in Chinese action movies in the past 20 years.

The "Ip Man" series of films he starred in spanned 10 years and was widely welcomed by audiences at home and abroad, and was hailed as one of the most influential action films in the past 10 years.

In the 1980s, the famous Hong Kong film director Yuan Heping, known as the "Eight Master", brought Yen Zidan into the movie hall.

"When I first entered the industry, I didn’t know. I found out how some actors were not punching as fast or as powerful as I imagined. They punched a few times, stopped a few times, and then set up the machine to fight again, instead of just taking the punches with one breath. All the tricks were used. Later I realized that Kung Fu film is a very unique film art with many techniques."

In Donnie Yen’s impression, early action films led the entire Hong Kong film market. There are many "schools" in the industry such as Hong Jiaban, Yuan Jiaban, Liu Jiaban, etc., which are quite "jianghu flavor".

Actors are born with the team, and generally don't go to other teams to film. They pay great attention to the "rules of the rivers and lakes".

"At that time, it was relatively simple to make kung fu movies. The actors did not need acting skills. As long as they played long, enjoyable and exciting, the audience would love to watch them. Other plots and acting skills were not so particular. This trend has continued. But with With the advancement of science and technology, the audience’s appreciation of movies is constantly improving. Compared with the past, the movie is not only an art, but also a technology. The audience must have an attitude of continuous improvement and innovation. Will not leave us." Yen Zidan said.

Donnie Yen serves as the promotion ambassador for the "Belt and Road" Film Week.

If the action film industry is compared to a "martial arts", Bruce Lee, Jet Li, Jackie Chan and many other movie stars are undoubtedly the "masters" of the martial arts.

Counting the many past "master tricks", Donnie Yen admitted frankly that there were two people who had to "play up the spirit of twelve points."

One is Jet Li.

In the movie "Once Upon a Time: Two Men Should Be Self-improvement", Huang Feihong (played by Jet Li) "decisive battle" Nalan Yuanshu (played by Donnie Yen)'s "play" is a classic.

"When filming this movie, the villain I played had to create the strongest pressure on Huang Feihong. At that time, everyone went all out and shot at the fastest speed. Jet Li is really fast, but I am better than him. Faster, otherwise you may injure the opponent or shoot again. He is a very strong opponent."

The second is former professional boxing athlete Mike Tyson, who had a rivalry with Yen Zidan in "Ip Man 3".

"Tyson is my idol. When I was a kid, I liked to watch him boxing. I didn't expect to be able to cooperate one day. But I also know that Tyson doesn't know how to act, and he doesn't keep his hands when making moves, so I kept telling myself that even making a movie should be regarded as a'life and death duel', and you must not be careless. I remember once, I felt his fist on my face, like a big truck rushing towards me and bumping me Hair, but I still have to dodge at the latest moment according to the director’s request. This is my most stressful scene."

In his opinion, for an action movie to make the audience feel interesting, excited, and enjoyable, it must first grasp the control of the rhythm, and attract the audience to chase it down "one ring after another" through the design of punching and somersault. Gradually enter the play; secondly, action actors must have "good skills", but they must abandon the inherent "programs" when performing roles, and rely on acting skills to make "fights" more real.

"In real life, you may be able to beat me; but on the big screen, no one can beat me. This is where I succeeded." Yen Zidan said that action movies also need acting skills to convince audiences of the roles performed by actors, The emotion of the performance makes the audience feel that the "beat" is real, which is the highest state.

"The most realistic performance of the body and the inner interpretation of the two are combined, and action movies can continue to go on." (End)