People don’t really understand the Dragon Boat Festival until they are middle-aged.

China News Service, Beijing, June 14 (Reporter Shangguanyun) The Dragon Boat Festival is here on the fifth day of the fifth lunar month. This is a festival infused with traditional culture, with the fragrance of zongzi and wormwood, the excitement of dragon boat racing, and good wishes.   It's not just Dragon Boat Festival. In the long time, every traditional festival is like a node, connecting 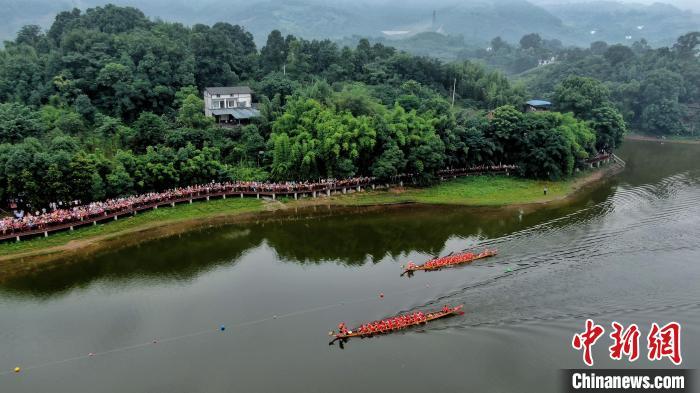 This is a festival infused with traditional culture, with the fragrance of zongzi and wormwood, the excitement of dragon boat racing, and good wishes.

It's not just Dragon Boat Festival. In the long time, every traditional festival is like a node, connecting our history and culture, leading us to grow up slowly, to realize the meaning of life and the unique romance of Chinese people.

Looking at the origin of the Dragon Boat Festival, many legends can be found.

"In Memory of Qu Yuan" is probably the most widely spread one.

Qu Yuan was born in the Chu Kingdom at the end of the Warring States Period. In the first half of his life, he was catching up with the "Emperor Qin Heng and the King of Chu". In addition, he was born in an aristocracy, and he was very talented. He was very appreciated by the King of Chu Huai.

Even so, Qu Yuan was still worried about the country and the people, and in anger, he wrote immortal articles such as "Li Sao" and "Heaven Questions".

A fisherman once persuaded him that he could protect himself wisely and learn to "follow the tide" in case of trouble. Qu Yuan was unwilling: he would rather jump into the river and bury himself in the fish's belly than to allow his pure character to be polluted by secular dust.

He was heartbroken, and finally bouldered and plunged into the rolling Miluo River.

After hearing this, the people rushed to the river to pay tribute to Qu Yuan, took out the dumplings and eggs from their homes and threw them into the river, hoping that the fish and shrimps would not bite Qu Yuan's body.

Over time, on the fifth day of May every year, there will be customs such as dragon boat racing and eating rice dumplings to commemorate the patriotic poet Qu Yuan.

Qu Yuan's story may not be the truth about the origin of the Dragon Boat Festival.

It is said that this festival is related to the seasonal solar terms, and people need to hold some activities to pray for blessings and eliminate disasters, and various customs come from this.

But with the passage of time, the Dragon Boat Festival began to have the cultural connotation of "memorializing the deceased", and he gradually became a C position.

In the Han Dynasty, there was a saying that Qu Yuan was related to the Dragon Boat Festival. In the Wei, Jin and Southern and Northern Dynasties, Qu Yuan's spiritual integrity was even more respected by scholars.

He was loyal to the emperor and worried about the country all his life, and pursued perfection. He was a model of a gentleman's personality; the Songs of Chu he left behind had a profound impact on later generations. Together with the "Book of Songs", he was called the "double bi" of pre-Qin literature. It is a traditional Chinese literary romantic and realist Two sources.

In his view, the ancient custom of praying for the Dragon Boat Festival was formed by the ancestors under the difficult conditions of survival.

When survival is no longer a problem, if you want this festival to continue, you must give it a new era meaning.

The addition of the image of Qu Yuan undoubtedly gave this festival a profound spiritual connotation, and also gave the Dragon Boat Festival a long-lasting vitality.

Whenever eating rice dumplings, drinking realgar wine, and racing dragon boats during the Dragon Boat Festival, people always think of the enthusiastic Qu Yuan. The inheritance of traditional culture and the core of festivals continue to this day under this commemoration.

A writer once said that the spiritual and cultural traditions of Chinese people are often inherited by the annual festivals that have been passed down from generation to generation.

When I was young, when I encountered the Spring Festival, Dragon Boat Festival, Mid-Autumn Festival... you may feel more superficial things: the noise of people, the hustle and bustle of carriages and horses, the festival is just a fun.

During the Dragon Boat Festival, parents apply realgar wine on their children’s ears, nose and forehead, and then tie colorful silk threads; or wear a small and interesting sachet filled with various medicinal materials.

When I was a child, I only found it fun. When I get older, I have more and more exposure to the world. I tend to be less and less concerned about these customary customs. When I am a middle-aged parent, I will know that there is unlimited care for my children. And blessings.

This is a kind of cultural inheritance, and also a kind of unique Chinese romance, implicit and far-reaching. It is quietly hidden in thousands of years of history and culture, elegant and delicate, and ubiquitous.

Chinese romance is fully reflected in traditional festivals, and it is no exception outside festivals.

This kind of romance has been on the hot search several times.

Some netizens said that people miss Li Bai, the "poetry fairy", and his tomb was filled with wine from all over the world; in front of Huo Qubing's tomb, someone left a piece of chocolate, "I want to come, he is also a kid in his early 20s, and he should like to eat sweet things. Right".

Life is full of firewood, rice, oil, and salt. Chat likes to discuss parents' shortcomings... Chinese people’s daily life looks pragmatic and trivial, but many ritualistic behaviors have long been inscribed in the bones. That is the romance that only Chinese can appreciate.

In the final analysis, it is a gentle flow of emotions between people and between hearts.

This kind of romance nourishes the Chinese people's cultural traditions, such as the concept of family and country, the feelings of mountains and rivers, and festival customs. It is precisely the confidence that we are proud of and inherited for thousands of years. (Finish)