Chinanews.com, Lanzhou, June 14 (Reporter Feng Zhijun) "The radius of'flying' has narrowed and the travel circle has shrunk." As the last small holiday in the first half of this year, the three-day Dragon Boat Festival holiday continued the "May Day" travel enthusiasm , And the "3-hour" travel circle has become the first choice for mainland people to travel. Many cities and scenic spots have lau 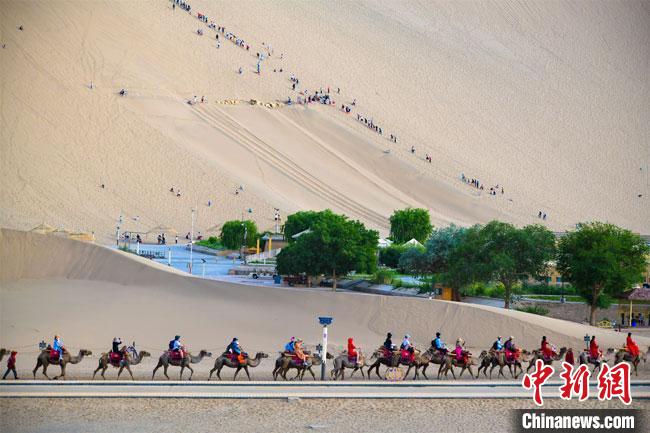 Chinanews.com, Lanzhou, June 14 (Reporter Feng Zhijun) "The radius of'flying' has narrowed and the travel circle has shrunk." As the last small holiday in the first half of this year, the three-day Dragon Boat Festival holiday continued the "May Day" travel enthusiasm , And the "3-hour" travel circle has become the first choice for mainland people to travel. Many cities and scenic spots have launched a number of special activities under the "Dragon Boat Festival" to attract more surrounding tourists.

"Instead of spending a lot of time on the road, just taking a fancy look and listening to a few words, it is better to choose the nearest one, which will not only give up the hardship of boats and cars, but also better relax." During the Dragon Boat Festival holiday. , Lanzhou office worker Yu Hao and his family drove to Shapotou, Ningxia, less than three hours drive, in his opinion, "really enjoyed a journey in a relaxed and comfortable way."

"I used to follow the trend to travel to famous Internet celebrity spots across the country during the holidays. The last thing I saw was a crowd of black and overwhelming people. It was desperate to line up for everything." Yu Hao said that office workers have tight time available on weekdays. 3. Traveling too far in a day is usually a "long trip short trip" style. I feel that traveling far is more tiring than going to work.

This year's Dragon Boat Festival, friends around you may choose to travel around "not far away" or simply rest at home.

The picture shows this year's Dragon Boat Festival holiday, a large number of tourists experience the "nightlife" of Dunhuang.

Compared with the "May 1st" long-term tour to cool down, consumers mostly take short- and medium-distance trips during the Dragon Boat Festival holiday, and nearly 50% of tourists sign up for surrounding tours within 300 kilometers.

Take Gansu as an example, where the ancient Silk Road traverses about 1,600 kilometers from east to west. Based on the continuous warming of archaeological tours, research tours, and pilgrimage tours on the ancient Silk Road, in addition to the Lanxin, Baolan, Yinxi and other high-speed railways that have been opened in recent years, and encryption The flight routes further shorten the "time and space distance" of surrounding cities, and the people's travel enthusiasm is even higher.

The reporter learned from the Lanzhou Railway Bureau on the 14th that the passenger flow data of the Dragon Boat Festival within the bureau has returned to the same period in 2019, and the passenger flow of Lanzhou, Qingyang, Tianshui, Yinchuan, Zhongwei, Jiayuguan and other stations has increased significantly.

Some carriages also launched special activities such as gifting small sachets to passengers and sharing the Dragon Boat Festival romance to further enhance the travel experience of passengers.

As the Dragon Boat Festival travel circle shrinks, how to keep tourists in the "3 hours" has also become a new exploration for cities to stimulate tourism consumption.

"Dragon boat races in Crescent Spring, collecting wormwood decoction for bathing, sand boarding and listening to thunder in Mingsha Mountain." Based on the Dunhuang Dragon Boat Festival traditional folk customs that have been passed down for thousands of years, the local holidays held "Sand Boarding and Tingle Thunder" and "Desert Dragon Boat Races" Rare and unique activities, attracting many visitors to "check it out"

“During the Dragon Boat Festival holiday, short-distance tourism in Dunhuang is particularly popular.” According to a staff member of the Dunhuang Municipal Bureau of Culture, Sports, Radio, Film and Tourism, the surrounding self-driving tours have become the “main force” of the rapid growth of Dunhuang tourism in recent years. Xinjiang, Qinghai, Gansu, and Ningxia are nearby. The tourism team of the four provinces of the Big Ring Road is increasing rapidly.

Some netizens believe that in the "three-hour travel circle", you can also appreciate the meaning of travel, and that the scenery and epidemic prevention are "not wrong."