'G-R' Kang Min-cheol's disappearance case... "The last witness's confession to murder, there is a possibility that truth and lies were mixed" 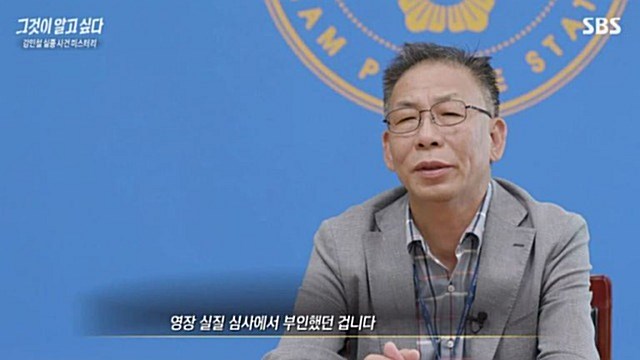 The last witness, what truth does he know?

On Monday, April 12, 2010, Kang Min-cheol, who went to work as usual, sent a text message to his wife saying that he was going to meet Mr. Park, the owner of the clothing store where he worked. This was his last contact, and even 11 years later, Min-cheol is still missing.

Choi, a mother who cared for the youngest son, Min-cheol. He suspected that his son had had an accident, but the daughter-in-law said that the son had financial problems, so he waited for his son to return someday.

However, the son's contact did not come no matter how long he waited, and contact with his daughter-in-law, Mr. Kim, was also cut off. Choi went to the house where his son and wife lived, but the daughter-in-law had already moved. Choi went to the police and requested an investigation. This was the first time in three years since Kang Min-cheol disappeared.

Choi intuited that Mr. Park and his daughter-in-law had something to do with the disappearance of his son. And the police told Choi a shocking story four years after Min-cheol's disappearance. Park confessed that he accidentally killed Min-cheol while arguing with him.

And it turned out that the police had a problem with Min-cheol and Park over the insurance money in the fire case. Park said that he had a fight with Min-cheol over the distribution of insurance money and that he accidentally killed him. In addition, the police did not actively seek out her husband and were suspicious of Min-cheol's wife, who was living with Park. However, despite the intense investigation, it turned out that the police could not find any specific suspects in him.

It turned out that many of Park's suspicious circumstances have been confirmed. The police remembered that Park's demeanor at the time of his arrest, who was arrested on charges of fraud and murder, was unusual. At the time of his arrest, he did not deny the allegations, and if he asked any questions, he joked that he had the right to remain silent.

In addition, in response to his request to meet his wife, the police allowed him to meet Mr. Park's wife, Mr. Han, who was also arrested on charges of conspiracy. After that, Mr. Park caused a change of heart, and in particular, the video of Min-cheol's mother Choi's appeal moved Mr. Park's heart. Afterwards, Park claimed that he committed an accidental crime while drinking alcohol with Min-cheol near the store and abandoned the body in a nearby vacant lot.

However, when he confessed, the place where he said he had abandoned the body was in a plastic house. The police then searched the area where he claimed to be abandoned. However, Min-cheol's body could not be found.

He also said that the abandoned place he pointed out was somehow awkward. Experts analyzed, "Are you abandoned in a place that is clearly observed in your store? It is a place that can be psychologically burdensome, but it is unlikely that such a place will be selected as a place to abandon the body."

He explained, "Abandoning the body is a risk, but throwing it anywhere is dangerous when the victim and the perpetrator have a relationship. When the body is found, it becomes a matter of identifying yourself."

Also, about Park's movement to Yeoksam-dong after meeting Min-cheol in Hanam, he said, "If the story of Dr. who moved from Hanam to Gangnam is true, the place where the body was abandoned is far from the truth."

And I paid attention to his movement, which moved from Hanam to Yeoksam-dong in Seoul, Iksan in Jeollabuk-do, and Dongducheon in one day. The expert pointed out that it is difficult to trust the contents of his confession, saying, "It is an interesting route that can only be considered to have gone to Iksan without sleeping. There are so many driving routes for two days that it is unimaginable how to understand this route," he pointed out.

At that time, Mr. Park said that he went to meet his close brother, Mr. Kim, as to the reason for visiting Iksan. However, the police noted that Kim was also highly related to the disappearance case. Kim was related to Park's Hanam clothing warehouse fire.

At that time, Mr. Park moved 2.5 tons of expensive clothes to the second floor of the restaurant Mr. Kim was running before the fire at the Hanam Clothing Warehouse, and Mr. Kim bought a candle for Mr. Park at Mr. Park's request. The police then investigated the two together. However, as a result of the police investigation, it was concluded that the fire at the Hanam clothing warehouse was not an arson for money.

The production team met Mr. Kim, who said he was still close with Mr. Park. He claimed to the production team that it had nothing to do with Min-cheol's disappearance. He said, "Isn't that important now?" about the fire at the Hanam clothing warehouse.

After visiting Iksan, Park moved to Dongducheon. The police said, "There were not many people who could explain the reason for the visit to Dongducheon. However, there is a circumstance that some of the 330 million won received from Kang Min-cheol flowed into his hometown friend Lee from Dongducheon."

An acquaintance of Mr. Lee was puzzled about his disappearance, saying, "It's a bit strange. It's still missing, but it's strange that it hasn't been found. There's still no reaction from life."

The disappearance case of Mr. Min-cheol returned to the original place after Mr. Park's confession was overturned. The police sent Ms. Park to the prosecution on charges of murder and abandonment of the body based on circumstantial evidence, but the prosecution dismissed the charges on the grounds that "the body was not found and the evidence was insufficient."

Min-cheol's ex-wife said that they had met after Park was released. At that time, Mr. Park said, "Is Min-cheol here? I thought this bastard would really appear. If he does, I won't let him go. It's really unfair." In response, the expert said, "I think that I am talking too much." "From my point of view, I don't know where Min-cheol is now, but it's not the time to say that I won't let him go if I meet him." pointed out that it was strange.

Park's daughter claimed, "At that time, my parents were both arrested by the police. At that time, I heard that if the police didn't confess, they couldn't even get their mother out, and they both threatened to confess if they didn't want to be sentenced to prison."

Park's continued allegation of torture and coercion in the police investigation. In response, the police emphasized that such a thing was impossible, saying, "There can be no coercive investigation in 2014. There are all recorded statements, and he was arrested under an arrest warrant, and he confessed."

In addition, the police said they would have secured evidence if they had investigated the disappearance again, but it is unfortunate that the investigation started three years later and that it is difficult to conduct a communication investigation. In particular, on the day that Min-cheol's wife reported her husband's disappearance, the Park and his wife's cell phone was canceled and replaced with a new one, and it was found that the previous cell phone could not be found.

The expert said, "It may have happened on that day by accident, but I need to explain why. It makes me think that Park and his wife Han are sharing facts related to Min-cheol's disappearance." And the expert added, "Of course, it may be a simple disappearance case. However, if there is even a slight suspicion, there may be unfair victims, so it is right to re-investigate it. You can think like that."

The production team found Mr. Han, who still lives with Mr. Park. However, he also refused to respond and threatened to report it if he did not return.

Finally, the broadcast sent a request to the investigative authorities to grant the last wish of an 83-year-old grandmother. Based on the clues that were missed at the time, I earnestly requested that the case be reviewed from the beginning. He also released a photo of 38-year-old Min-cheol, who disappeared at the time of his disappearance wearing a white jacket, a black shirt, jeans and brown shoes, and asked for information from those familiar with his disappearance.