During the Dragon Boat Festival holiday, a round of rain in the south welcomes the new year

China Weather Network News today (June 12) The Dragon Boat Festival is open. It is expected that there will be more rain or thunderstorms in the north during the holiday, and the rain in the south will gradually increase. A new round of precipitation will hit from the Sichuan Basin to Jianghuai and other places tonight. Southern China Under the influence of tropical depression, there is strong l 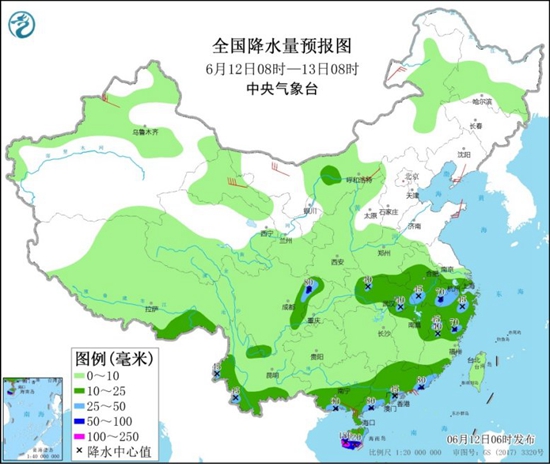 China Weather Network News today (June 12) The Dragon Boat Festival is open. It is expected that there will be more rain or thunderstorms in the north during the holiday, and the rain in the south will gradually increase. A new round of precipitation will hit from the Sichuan Basin to Jianghuai and other places tonight. Southern China Under the influence of tropical depression, there is strong local rainfall in the region.

In terms of temperature, there will be high temperatures in North China, Huanghuai and other places.

During the Dragon Boat Festival, there are more thunderstorms in the north and increased rainfall in the south

Recently, rain is the "protagonist" on the weather stage. Although the rainfall weakened yesterday, the heavy rainfall was still scattered in Jiangnan and other places.

Live monitoring data showed that yesterday, there were heavy rains or torrential rains in parts of southeastern Zhejiang, northern Fujian, southwestern Jiangxi, southern Hunan, and central and western Yunnan. Local heavy rains in Wenzhou, Taizhou, Zhejiang, etc.; affected by the tropical depression in the South China Sea, Hainan Island Heavy rain and local heavy rain occurred in the east, and heavy rain on some islands of the Paracel Islands.

Today, the Dragon Boat Festival holiday opens. There will be many rain showers or thundershowers in the north this holiday. Although the overall rainfall is not large, strong convective weather may occur in the Northeast, North China and other places.

In the south, the rain during the Dragon Boat Festival will gradually increase. From today to the 14th, a new round of precipitation will occur in the Sichuan Basin to the west of Huanghuai, Jianghuai and other places. There will be moderate to heavy rains in some areas, and heavy rains or heavy rains locally.

At the same time, the South China Sea has a tropical low pressure system. At 5 o'clock this morning, its center is located on the offshore water about 50 kilometers east of Wanning City, Hainan Province. The maximum wind force near the center is 7 (15 m/s).

It is estimated that the low pressure center will move to the northwest at a speed of 15-20 kilometers per hour, and it will soon land on the coast from Wanning to Lingshui in Hainan (tropical depression or tropical storm level, 7-8 level, 15-18m/ Seconds), after passing through Hainan Island, it will move into the sea surface of Beibu Gulf around this evening, and its intensity will gradually increase. It may develop into the No. 4 typhoon this year. It will make landfall in northern Vietnam on the morning of the 13th (tropical storm or severe tropical storm). Grade 8-9, 20-23m/s), then gradually weaken and dissipate.

Affected by this, today, most of the South China Sea, the waters near the Xisha and Zhongsha Islands, the Qiongzhou Strait, the Beibu Gulf and Hainan Island, the western coast of Guangdong, and the coast of Guangxi will have strong winds of 6-8, gusts of 9-10, and the Beibu Gulf. In some sea areas, the wind can reach level 9 and the gusts can reach level 10 to 11. There are heavy rains in the central and southern parts of Hainan Island, the Paracel Islands, the coastal areas of Guangdong, and the coastal areas of Guangxi. Among them, there are heavy rainstorms in southern Hainan Island.

High temperature development in North China, Huanghuai and other places, some areas need to prevent dry and hot wind

On the first day of the Dragon Boat Festival holiday, Xinjiang, southern North China, most of Huanghuai, southeastern Inner Mongolia and other places have high temperatures above 35°C. Among them, the daily maximum temperature in eastern Xinjiang and local areas in Inner Mongolia can reach 37-39°C.

Guangxi, Hunan, Jiangxi, Fujian and other localities have high-temperature weather above 35°C.

At the same time, as the warm and humid air flows northward, the sultry feeling in Huanghuai and other places will gradually increase.

The day after tomorrow, the rainfall in Huanghuai and southern Shaanxi will increase, and the high temperature will quickly subside.

In addition, there will be 2-3 days of dry and hot wind in parts of southern Hebei, Henan, Guanzhong region of Shaanxi, northern Shandong and western regions, so take precautions.