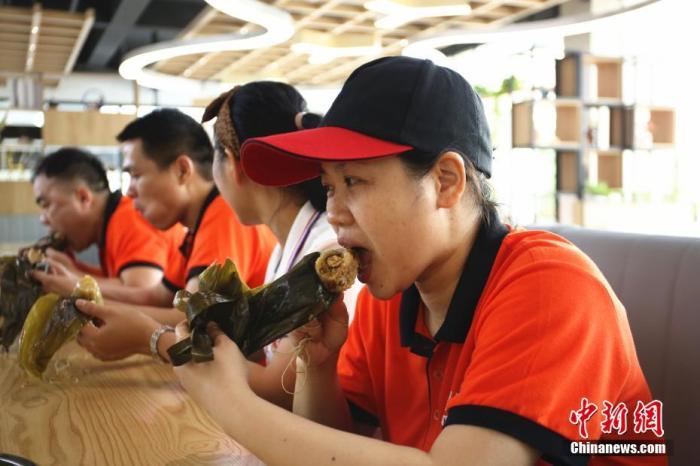 A snail noodle manufacturer in Liuzhou City, Guangxi, packaged snail noodles into nearly 10,000 zongzi and distributed them as benefits to employees and customers to try new things.

In recent years, there have been endless new products that combine traditional festival food and current Internet celebrity food "cross-border".

They not only provide people with a new "tip of the tongue" experience, but also add new interest to traditional festivals.

On June 10, the company distributed zongzi to employees and customers to try new things.

The "everything is acceptable" snail noodles "started" on zongzi again when the Dragon Boat Festival was approaching the traditional Chinese festival.

On the evening of the 10th, Yu Yujing, an employee of Guangxi Luobawang Food Co., Ltd., who got the snail noodle dumplings, couldn’t wait to open it.

The four-cornered rice dumplings wrapped in twine look the same as traditional rice dumplings. Layers of zong leaves are peeled off. With the unique smell of snail powder, one is wrapped in glutinous rice with sour bamboo shoots, snail meat, quail eggs, peppers, etc. The snail noodle dumplings with fillings show the "true colors".

After taking a bite and chewing for a few times, I felt the taste of snail noodle dumplings after the taste buds spread, and the "post-95" Yu Yujing unconsciously opened his eyes.

"It's delicious!" Yu Yujing praised while eating. The combination of these fillings and glutinous rice is not obtrusive at all, spicy and delicious, and full of flexibility, giving the zongzi a new "soul".

And it is not only the aforementioned companies that pack snail powder into the rice dumplings.

A car company in Liuzhou cross-border launched 20,000 snail noodles dumplings, which sold out within a few hours after going online; the time-honored "Wufangzhai" brand also included snail noodles in the dumplings, attracting young consumers to "chase the new".

The zongzi, which is staged in the North-South savoury contest every year on the Dragon Boat Festival, has already assumed a posture of "can hold a boat in the belly" to satisfy all people's imagination of zongzi.

Some people call it the innovation of the cross-industry alliance, while others call it "dark cooking."

According to Cheng Hao, a postgraduate tutor in the School of Biology and Chemical Engineering, Guangxi University of Science and Technology, snail noodle dumplings and crayfish dumplings are innovations in traditional fillings for zongzi, and they are not dark dishes.

Cheng Hao said that the food culture should not be conservative. It must maintain traditional characteristics and dare to innovate.

The filling of traditional zongzi is usually red dates. Later, according to needs, the zongzi with chestnut, meat filling, egg yolk and other fillings was continuously innovated.

Crayfish and snail noodles are popular Internet celebrity delicacies. Combining them with zongzi is a good interaction and deserves encouragement.

With the development of economy and society, people's pursuit of food is no longer satisfied with the fruit belly. In addition to the complete color and flavor, the taste and novelty of food have also become eye-catching points.

Zhou Wenling, the head of the cultural and tourism department of Guangxi Luobawang Food Co., Ltd., in Heilongjiang, is a “loyal fan” of sweet rice dumplings. “I never eat salty rice dumplings”.

Zhou Wenling said that after eating snail noodle dumplings, snail noodles dumplings should be able to break the salty-sweet controversy, like snail noodles, "eat both north and south", and let people have a "snail noodle flavor" Dragon Boat Festival.

Cheng Hao said that the cultural significance of the “new products” obtained after the innovation of traditional cuisine is still there.

No matter what fillings are replaced, they are still rice dumplings and moon cakes in essence.

These "new products" not only did not weaken the festive atmosphere, but at the same time gave new elements to traditional festive food, they also made the festival more interesting and meaningful.