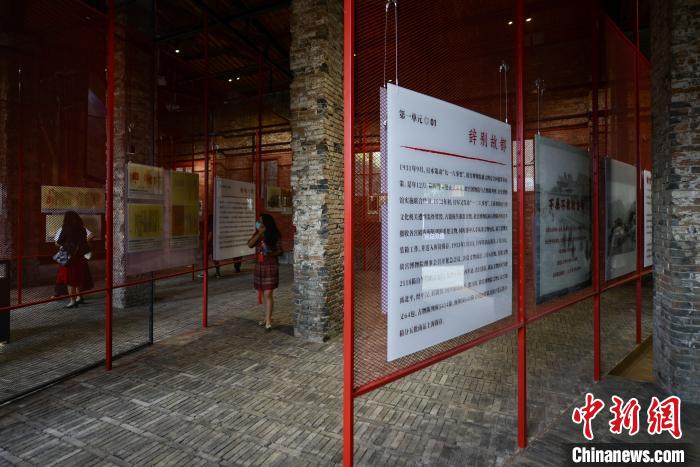 The southward movement of the Forbidden City cultural relics is a cultural relics protection operation organized by the Palace Museum during the Anti-Japanese War. It started in February 1933 and arrived in Chongqing along the Yangtze River in May 1938.

This batch of cultural relics are deposited in Chongqing Yuzhong Chuankang Bank, Nan'an Anderson Bank, Geely Bank and other places.

Among them, the warehouse area of ​​Andersen House is large, the space is high, and water transportation is very convenient. Sweden is a neutral country during World War II. Its commercial and civilian assets are not easy to be bombed by the Japanese army. A total of 3694 boxes of Forbidden City cultural relics are secretly stored in Andersen House. This warehouse has made important contributions to the protection of national treasures and the inheritance of Chinese culture.

The Southward Movement of the National Palace Museum in Chongqing occupies an area of ​​about 2500 square meters.

The reporter saw at the scene that after the renovation of cultural relics, the creation of the surrounding environment, and the presentation of diversified business formats, Chongqing has built 8 buildings on the former site of Anderson International Holdings Ltd., opening a memorial hall, a cultural lecture hall, education classrooms, the Forbidden Academy, and a bookstore. , Cultural and Creative and other cultural venues and supporting services.

In order to reproduce the historical features of Anderson House, and cooperate with the activation and utilization, Sunac invited Zhang Yonghe, an internationally renowned architect and former director of the Department of Architecture of the Massachusetts Institute of Technology, to preside over the renovation and design.

According to the restoration design plan, the 4 cultural relic buildings are protected in accordance with the principles of cultural relics restoration, using raw materials, original craftsmanship, original shape system, and original methods to "repair as old as old" to preserve the historical information of cultural relics to the greatest extent; 4 traditional buildings are "old" "For the new", such as adding modern elements such as glass curtain walls, steel structures, and rotating wooden beams, presenting a dialogue between the new and the old, and the symbiosis of history and modernity.

The picture shows the Southward Movement of the National Palace Museum in Chongqing.

Li Jingshen said that the current southward migration of the Chongqing National Palace Museum has been continued and updated while maintaining the overall historical outlook, which has increased its openness and achieved the purpose of overall protection and activation.

It also integrates functions such as display, education, experience, and leisure to meet multi-level cultural and consumer needs with multiple formats.

The establishment of the memorial hall will help the general public have a deeper understanding of the Forbidden City culture and the history of the War of Resistance Against Japan.

The Palace Museum has long attached great importance to the sorting, research, academic research, display and dissemination of historical relics of the Palace Museum’s southward migration. In the future, it will continue to support the work of the Chongqing National Palace Museum’s southward migration memorial. Through the active participation of the whole society, we will jointly create cultural heritage protection and cultural relic activation. A new era of utilization.

According to reports, after the completion and opening of the Chongqing National Palace Museum Cultural Relics' Southward Movement Memorial Hall, it will display the historical facts of the National Palace Museum's cultural relics' southward migration through themed exhibitions and small-scale performances, and spread the concept of cultural heritage protection. At the same time, the National Palace Museum and Chongqing will also participate in cultural and creative industries Strengthen exchanges and cooperation in academic research, cultural education, and digital applications to continuously meet the spiritual and cultural needs of the public.