The fashion critic about the match shirt: "Is the national team going on a rampage?"

The men's and women's national football teams are entering their respective hot championships this summer. But what will they look like on the pitch? The cultural news' fashion critic Dennis Dahlqvist has closely studied the Swedish EC and Olympic jerseys. 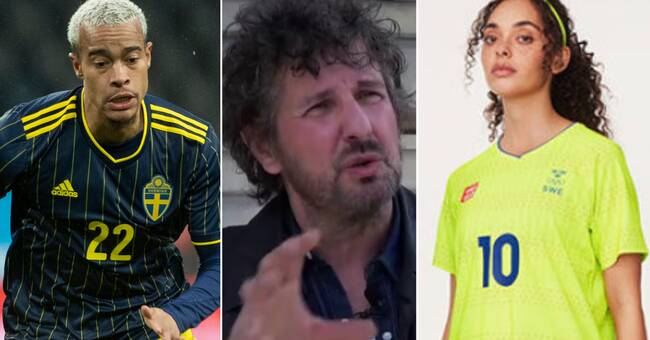 As usual, the team will have an all-yellow home kit and a dark blue away kit.

The away shirt is Dennis Dahlqvist's favorite.

It is classic but also modern.

The narrow chalk stripes in yellow against the blue background make it elegant.

It is reminiscent of Björn Borg's classic Wimbledon jersey.

Worse is the manufacturer Adidas' imprint on the shoulders, says Dennis Dahlqvist.

- I do not like their territories that they have to press.

- It is quite boring and incomprehensible.

It has its own design details such as a semicircular cut across the chest - strange!

On the sleeve ends there is a distorted Swedish flag where the cross is yellow AND blue - strange!

Barely a month after the European Championship final, the Olympics start in Japan.

But now you take the turns.

The football ladies' match kit has already received a lot of attention for its neon yellow color.

I understand that many fans do not think it is a football shirt.

One may ask whether the national team should go on a rampage?

- Just 80's design is about communication rather than function.

The plus pattern on the chest almost disturbs the Swedish logo.

But the sweater is quite nice with a cool design and signals: Here we come!

The clothing brand Uniqlo has been in windy weather during the spring.

The organization Clean Clothes Campaign and Amnesty have accused the company of using cotton from Xinjiang province in China, something Expressen and SVT have previously reported on.

In the province, about two million people are placed in internment camps where they are locked up, subjected to abuse and forced labor - often on cotton plantations.

This mainly applies to the Uighur ethnic group but also to other Muslim minorities.

But Uniqlo rejects the criticism.

An email to Kulturnyheterna states: “None of our production partners are in the Xinjiang region of China, and no fabric or spinning coats used in the manufacture of Uniqlo products are found in the area.

(...) All Uniqlo products are made exclusively from cotton that comes from sustainable sources ”.

The Swedish Olympic Committee sees no problems with the cooperation with the clothing giant.

"Uniqlo has confirmed that all cotton used for the official clothes worn by Swedish Olympians comes from factories outside China," writes media manager Lars Markusson in an email.