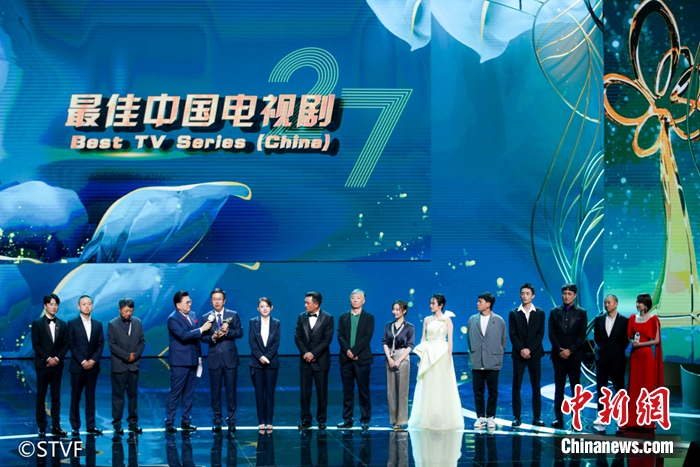 On the evening of June 10, the Magnolia Award at the 27th Shanghai TV Festival was announced, and "Mountain and Sea Love" won the best Chinese TV series.

Once the shortlist of the Magnolia Awards was announced, netizens were called "Fighting Fairy" and "the strongest in history". Many annual "Booms" have become the hottest prizes for major awards here.

After a fierce competition, a group of masterpieces represented by "The Love of Mountains and Seas" and "The Age of Awakening" won many awards.

That night, the best Chinese TV series "Flower Falling" "Mountain and Sea Love", this drama tells the story of poverty alleviation in Xihaigu since the 1990s in a fascinating way.

The jury commented that the romantic expression on the basis of realistic creation, the grand presentation of the mission and achievements of a generation of people, "Mountain and the Sea" has reached a superb artistic level and harmonious unity in the drama, performance and video.

Producer Hou Hongliang said with emotion: "The first time I watched the sample, I was very moved. Huang Xuan's Ma Defu made me yearn for. He represents all our grassroots cadres. All these years of poverty alleviation are because of their Efforts can be achieved."

Screenwriter Long Pingping, with profound historical and cultural heritage and strong drama structure ability, has combed the history of this period of numerous characters and events, and the characters are vivid and deeply rooted in the hearts of the people.

"I am an amateur screenwriter. I can stand here today, with the light of the subject matter. It is a wonderful history and touching characters." Long Pingping said in an interview. "The Awakening Age" tells the story of a hundred years ago. In that era, A group of young people stepped forward to find a way out for the country, and even went to death calmly and generously. "This drama is written to let today’s young people know that they (referring to the young people of that era) are living happily with us today. relationship."

The anti-epidemic era report drama "Together" and the TV drama "Thirty Only" won the International Communication Award.

The former showed to global audiences the spirit of the Chinese people in fighting the epidemic and helping each other in the same boat, and was broadcast on TV stations in more than 50 countries and regions overseas; the latter’s depiction of the image of women in China today attracted not only domestic audiences but also overseas The audience's wide attention, and successively landed in more than 100 countries and regions around the world.

In addition, "Escape from Poverty", which records the Chinese miracle, was awarded a special prize from the organizing committee; "Across the Yalu River" and "Together" won the jury award; actor Tong Yao won for her pure and sincere performance in "Thirty Only" Best Actress; Best Screenplay (Adaptation) won by Ma Xiaoyong from "Zhuangtai"; Best Art by Di Kun, "The Golden Years"; "China in Classics" won the Best TV Variety Show.