The honey bee, bred for its honey, has been erected as a symbol of biodiversity. The installation of beehives has exploded in Paris over the past ten years. At the risk of threatening populations ... 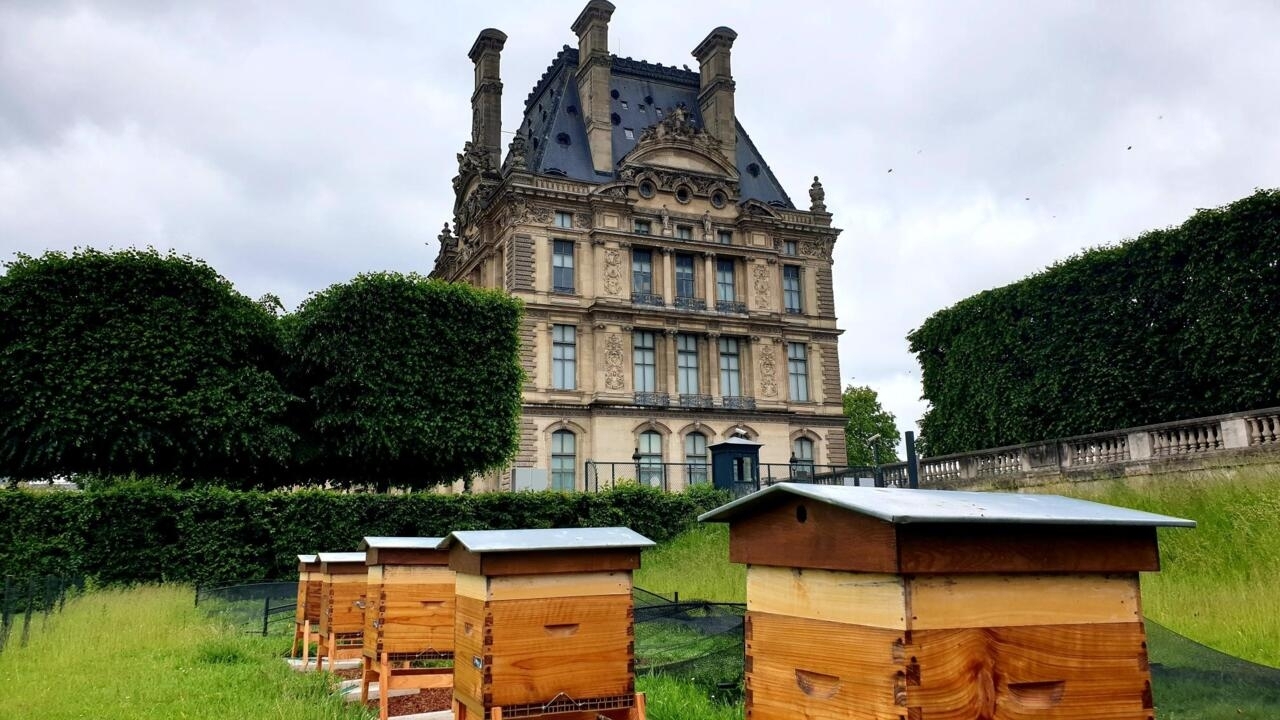 The bad buzz of bees in the city

The beehives of the Louvre museum in the Tuileries garden.

The honey bee, bred for its honey, has been erected as a symbol of biodiversity.

The installation of beehives has exploded in Paris over the past ten years.

At the risk of threatening wild bee populations.

They are the buzz in town. Bees are urban queens.

, which humans have kept for their honey for over 5,000 years. Symbols of a city craze for the protection of nature, beehives are found in the city, and particularly in Paris, in gardens, on the roofs of businesses, monuments and public buildings. A real rush on the beehives.

In the Tuileries garden, in the extension of the Louvre museum, six beehives were installed in 2018, near the large avenue of lime trees which overhangs the quays of the Seine for nearly a kilometer.

"Among the actions favorable to biodiversity, we wanted to reintroduce pollinators, because we are in a garden that covers 30 hectares,"

We are in a green lung of the city.

The bees here have enough forage, which does not stop to see if the flowers are more beautiful within 3 kilometers away.

Bees in the city, it's an idea hive, but on condition that there are not too many. Paris had less than 300 beehives 10 years ago. There are at least 2,000 today, for those that are declared. This represents, given the area of ​​the French capital, 20 beehives per square kilometer, a density ten times higher than the national average. Even though we are in town. Certainly a city without pesticides. But a city dominated by asphalt and concrete, and where flowers are less numerous, despite the enthusiasm of Parisians to decorate their windows and balconies.

Fewer flowers available, too high a density ... Biologist Isabelle Dajoz, researcher at the Institute of Ecology and Environmental Sciences in Paris, has shown that wild bees, of which around a hundred species have been counted in Intramural Paris could be threatened.

“The higher the density of honey bee hives, the fewer visits by wild pollinators, such as wild bees, butterflies, flies and other insects. This suggests a competition for access to flowers, therefore for access to food, pollen and nectar. If everything is monopolized, or almost, by honey bees, we can indeed assume that this will have an effect on the density of wild bee populations. "

Too much bee kills the bee.

This phenomenon is accentuated for insects of the same size as the honey bee, due to the size of the flowers that they can forage.

Honey bees only pollinate 15% of flowers

In the hive, there is strength, information on the location of flowers circulates, when wild bees are mostly solitary.

thus collects some 500 flowers per day. Voracious, but not necessarily effective for pollination, at least less than the wild bees whose work worldwide is estimated at 265 billion dollars per year.

"Honey bees cannot first forage for all species of flowers

A nice paradox: the honey bee has been set up as a model of pollinators when it only ensures 15% of the fertilization of flowers.

For people, the bee is the symbol of biodiversity and the proper functioning of ecosystems, while it is only one species of pollinator among others

No, but for rats, or more exactly a savannah cricetoma, a large rodent from Tanzania and used in Cambodia for the detection of anti-personnel mines, thanks to its sense of smell.

The NGO which employed him has just granted him his retirement after 5 years of service.

A safe job for him, because of his weight which protects him from explosions.

Magawa is a real star who was entitled to her portrayal in the New York Times.

It even has its Wikipedia listing.

Connected hives to save our bees