Sanxingdui has doubled up on new things! What is the story behind the mysterious golden mask?

Chinanews client, Beijing, May 28th (Reporter Song Yusheng Shangguanyun) On the 28th, the mysterious Sanxingdui site once again brought surprises to people:   Various fragments of sacred trees, gold objects, and copper masks have been found in the ashes of Pit No. 8 in the ash layer of nearly 20 cm. The newly unearthed fragment of a golden mask has clearly visible outlines of ears and mouth. Th 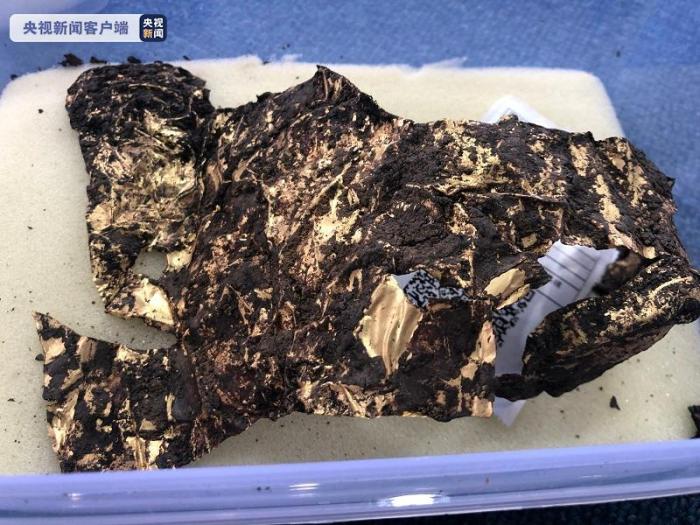 Various fragments of sacred trees, gold objects, and copper masks have been found in the ashes of Pit No. 8 in the ash layer of nearly 20 cm. The newly unearthed fragment of a golden mask has clearly visible outlines of ears and mouth.

The kneeling figure of the national treasure-class cultural relic of No. 3 Sacrifice Pit is also unveiled!

After the news was announced, #Sanxingdui unearthed a piece of golden mask fragments#, #Sanxingdui铜顶尊坐坐人像# on the hot search.

Some netizens lamented the exquisiteness of the cultural relics, while others speculated that the ancient Shu people were very rich.

However, do you know that there is any story behind these mysterious golden masks?

Fragment of the golden mask.

What is the use of golden noodles?

Reports show that the newly unearthed golden mask fragments are similar in shape to other masks, with wide ears, prominent eyes, a relatively high nose, and a slightly raised mouth, which is a mysterious smile.

Previously, cultural experts pointed out that the size of the golden mask unearthed in Sanxingdui was obviously not suitable for human faces.

The bronze figure with a golden face mask currently in the Sanxingdui Museum may be closer to the historical truth.

Data map: Bronze head with gold mask, unearthed in 1986 at No. 2 Sacrificial Pit of Sanxingdui Site.

But no matter where the golden mask is used, its role in Sanxingdui culture is obviously related to sacrifices.

At the Sanxingdui Global Culture Promotion Conference on the 28th, Wang Wei, member of the Chinese Academy of Social Sciences and chairman of the Chinese Society of Archaeology, pointed out that Sanxingdui has its unique sacrificial system, which is reflected in the unearthed cultural relics such as golden masks and sacred trees.

Wang Wei also said that the ancient Shu civilization has strong characteristics of its own, but it also has a close relationship with the Central Plains, learning and borrowing a lot of the Central Plains ritual system.

So, where are these connections reflected?

This starts with the cultural relics unearthed.

The excavation site of the golden mask at No. 5 sacrificial pit at Sanxingdui site.

"Even the weird-looking bronzes have a lot of decorations from the Central Plains Shang culture."

Faced with the distinctive cultural relics in Sanxingdui, Lei Yu, the head of the Sanxingdui Site Workstation of the Sichuan Provincial Institute of Cultural Relics and Archaeology, specifically mentioned the multiple aspects of them on the 28th.

"For example, almost a whole set of Shang dynasty bronzes, such as cloud thunder pattern and animal face pattern, which are common in Shang culture, were applied to the bronze wares of the late Shang Dynasty in Sanxingdui."

At the same time, the sacrificial system of Sanxingdui behind the golden mask shows that the culture of Sanxingdui has a "strong belief in gods and witches."

This is not isolated.

According to Lei Yu, many of the relics in the Yangtze River Basin that have been seen from the late Neolithic period to the Shang and Zhou period have "the tradition of making statues of gods or witches with artifacts."

He believes that "Sanxingdui obviously has close communication with these areas."

The open and inclusive Sanxingdui

In the global promotion of Sanxingdui culture, a heavy bronze object from the sacrificial pit No. 3 of the Sanxingdui site was unveiled on a large screen.

It is a kneeling figure of bronze statue located in the south of No. 3 sacrificial pit with a height of 115 cm.

The kneeling statue of the bronze statue consists of two parts. The upper part is a 55 cm bronze big mouth statue. There is a short column on the inner side of the bronze statue’s mouth, and the shoulders are welded with exquisite dragon-shaped decorations; the lower part is a kneeling position with hands. A 60 cm tall bronze figure holding an object in front of him.

Its characteristic is to reform the bronze statues and lei in the Central Plains to form a bronze ritual vessel with southern characteristics.

This shows that Sanxingdui and these places have had close cultural exchanges.

In Wang Wei's view, the cultural relics unearthed at Sanxingdui not only provided a lot of materials for solving many historical mysteries, but more importantly, they showed that the ancestors here at that time insisted on their own characteristics and continued to absorb, learn from, and develop. It must be open and inclusive.

The connotations of these ancient Shu cultural relics are also of great significance today.