Emirati diplomats and intellectuals confirmed that the UAE is celebrating its fiftieth year this year, and is preparing ambitious plans for the next fifty years, based on an authentic past and a prosperous future. They explained that the establishment of the union did not happen overnight, and the road to it was not paved with roses 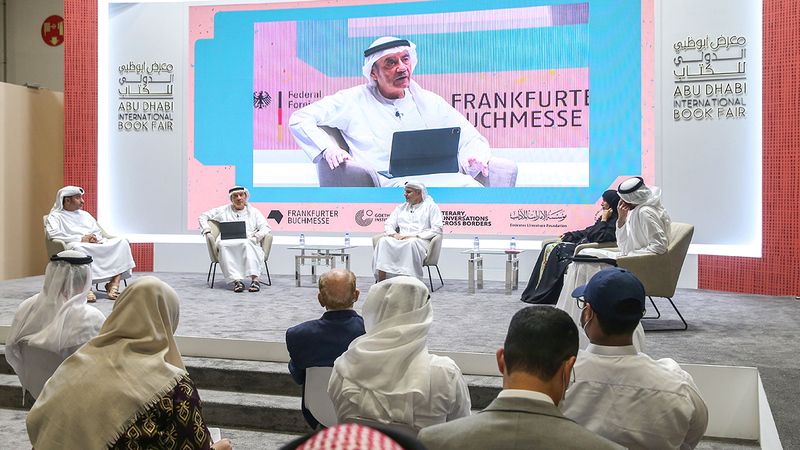 Emirati diplomats and intellectuals confirmed that the UAE is celebrating its fiftieth year this year, and is preparing ambitious plans for the next fifty years, based on an authentic past and a prosperous future.

They explained that the establishment of the union did not happen overnight, and the road to it was not paved with roses, but there were many challenges that the founding father, the late Sheikh Zayed bin Sultan Al Nahyan, may God bless him and his brothers, the rulers of the Emirates, have faced. Work to complete the achievements of the founding fathers, and work to achieve more achievements in various fields.

The cultural advisor to His Highness, President of the State and Supreme President of the Emirates University, Zaki Nusseibeh, explained that the future of the UAE began with a dream written by the founding father Sheikh Zayed, may God rest his soul, on the sand, and today the nation and its residents reap the fruits of this dream, and what it is witnessing in terms of developments, achievements and an unparalleled civilization Her in all areas.

Stressing, during the session organized by the Abu Dhabi Book Fair yesterday evening, on the renaissance of the Emirates and the story of its development, entitled "The Year of the Fifty and the Road to the Future", moderated by Hamad Al Kaabi, editor-in-chief of Al-Ittihad newspaper, that Sheikh Zayed was keen from the beginning to build people in parallel with His efforts to build the nation, based on his conviction, may God have mercy on him, that man is the focus of every real development, and that an educated person is the one who is able to build his country, and men are the true force that we cherish.

He added: “When we look around us in the Emirates, the country of prosperity and stability that has become a spike of good and a beacon of hope radiating to the whole region and the world, we have to remember the beginnings that came with Zayed's dream on the sand, and for me I remember the meetings that we had with the late Sheikh Zayed in the sixties and seventies. The last century, and how were the attendees of media men of different nationalities asserting that this union could not be established, and if it rose, it would not continue in light of the storms and ravages that were witnessed in the region, in addition to the absence of infrastructure in the Emirates. Brothers, the founding fathers, to defy these difficulties and build the state and strengthen the structure ».

Pointing out that the talk now about the establishment of the union may make some believe that it happened overnight, but the fact of the matter is that the state went through difficult years to build the union and maintain this building.

In his speech, the UAE ambassador to France, Ali Abdullah Al-Ahmad, focused on three main points: the message of the UAE abroad, the speed of recovery, and building cultural bridges. He pointed to the importance of telling the story of the Emirates to the public abroad, starting from a period before the union, so that the world knows where the Emirates and its people began, and the difficult conditions in which they lived, where one child in every two children who were born died, and one in every three women died, which is what It illustrates the extent of the weakness of services, infrastructure and the low level of education during that period, then the story moves to the second phase, which deals with the establishment of the Union to clarify that it did not come easily, and the road was not paved with roses, as there were great challenges, both before the establishment of the state or in the beginnings, with Emphasizing that the material wealth granted by God to the Emirates is not a guarantee of advancement and progress, as there are countries whose wealth has turned into a curse. He added:“It is important to explain where we have arrived, and the numbers we have achieved in various fields, especially in the field of education, empowerment of women and their participation in leadership positions in the country, while the last phase focuses on explaining where we are going in the next fifty years, as we have ambitions that are different from the past fifty, And different challenges await us from those that we have overcome. ”

As for the second point, according to what Al-Ahmad explained, it is the speed of recovery, expecting that the coming period will witness large economic blocs and alliances around the world, for the speed of economic recovery, calling for the state’s orientations and national interests to be clear, and for investment to go towards areas in which the state did not invest in Previous years such as space, advanced agriculture and others.

With regard to building cultural bridges, which is the third point in his speech, Al-Ahmad referred to the UAE's experience in building unique cultural bridges with France, and although the UAE is not part of the Francophone group of countries and does not have ancient historical ties with France, it has become, in the presence of a museum. Louvre Abu Dhabi and Sorbonne University Abu Dhabi are the gateway to French culture for the whole world.

Pointing out that the demographics of the UAE, and its great diversity of nationalities, has proven over the years to be an advantage and not a factor of weakness as some viewed it in the past.

Writer and critic Fatima Al Mazrouei addressed the situation of women in the Emirates, referring to the faith of the Forgiving Sheikh Zayed, may God rest his soul, from the outset on the necessity for women in the Emirates to play an active role for the development of their homeland. She also paused before the role played by Her Highness Sheikha Fatima bint Mubarak, President of the General Women's Union, Chair of the Supreme Council for Motherhood and Childhood, and Supreme Chairwoman of the Family Development Foundation (Mother of the Emirates), as a fundamental supporter of women and their role in the country.

Al Mazrouei explained that there are factors that have led to the success of empowering women in the Emirates, most notably the state’s clear vision of the role that women can participate in building their homeland, and the leadership’s interest in building people in general, as well as the existence of a legislative environment that supports the role of women represented in the constitution and federal and local laws. The national strategy for the empowerment of women, and the existence of clear mechanisms to work on empowering women.

In addition to the important role that the Emirates Council for Gender Balance has played since its establishment in 2015 in achieving balance between the sexes in bringing together state institutions.

Calling for work to invest in figures and statistics in the future.

The role of youth

The Director General of the Federal Youth Foundation, Saeed Al-Nazri, addressed the role of youth in the next 50 years, stressing that the most important thing that can be presented to the nation “is that we document for future generations everything that has been achieved in the past fifty years. In every home in the Emirates there is a dream that has come true, a success story, and values It deserves to be recorded so that we can learn from it, document it and pass it on to future generations.

Therefore, we worked on the initiative (The First Dreamers) to tell the story of the fathers and grandfathers and the sacrifices they made.

• “The future of the UAE began with a dream that Sheikh Zayed had planned on the sand, and today the country and its residents are harvesting the fruits of this dream.”

• “Material wealth is not a guarantee of progress and progress, as there are countries whose wealth has turned into a curse.”