China News Service, May 26 (Reporter Chen Jing) Shanghai, which had been clear for two days, started to rain quietly last night.   When the rain breaks, the clouds gather, the sky is full of haze, and the raindrops fall sporadically, as if the sky is weeping. At 8:30 in the morning, the farewell ceremony of Wu Mengchao, academician of the Chinese Academy of Sciences and "Father of Chinese Hepat 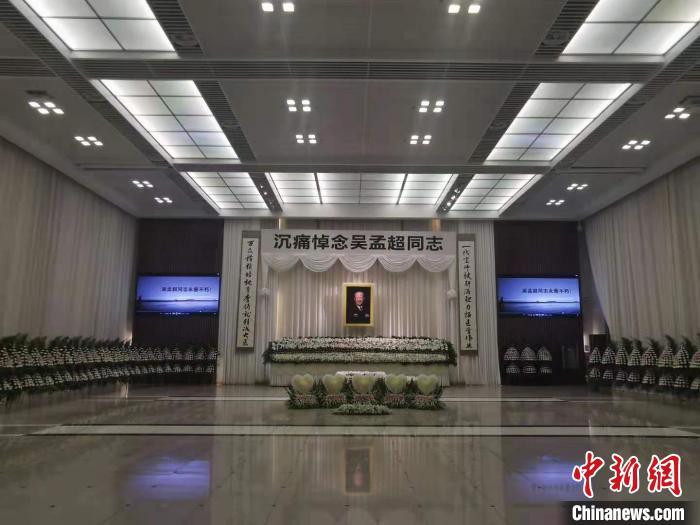 When the rain breaks, the clouds gather, the sky is full of haze, and the raindrops fall sporadically, as if the sky is weeping.

At 8:30 in the morning, the farewell ceremony of Wu Mengchao, academician of the Chinese Academy of Sciences and "Father of Chinese Hepatobiliary Surgery", was held in Shanghai Longhua Funeral Home.

Some patients heard of Wu Laoxian's death, and made a special trip to bid farewell to Wu.

Speaking of Mr. Wu, the patients and their family members couldn't help tears.

The friendship between doctors and patients has long been buried in my heart by the help of Wu's life-saving grace and many years of care.

People in Shanghai sent bouquets of flowers to express their condolences.

The majestic "Internationale" was played in the mourning hall outside the hospital, and there seemed to be a bit of inspiring power in the solemn mourning.

Zhang Peng, who has worked with Mr. Wu for more than ten years, told reporters that "Internationale" is Mr. Wu's favorite song.

He would often listen to it by himself during his lifetime.

Sun Yuming, director of the Department of Anesthesiology at Shanghai Oriental Hepatobiliary Surgery Hospital, believes that "The Internationale" is a summary and portrayal of the fight against disease, the common enemy of the mentor throughout his life.

Some people collected hundreds of comments from netizens to the funeral home to give to Mr. Wu.

In the hall, the elegiac couplet on both sides of the portrait of Wu Lao outlines the life of the deity: "The model of all the people, Pei Tao Yu Li casts the sincere and great doctors, and strives to revitalize the cause of medicine."

In the solemn background, the old Wu in the portrait still has a familiar smile on his face.

He watched the younger students, kindly and expectantly.

Early in the morning, many people came to Longhua Funeral Home to bid farewell to Mr. Wu.

Ms. Liu who came to send flowers was a family member of the patient, and she was deeply moved by Mr. Wu's medical ethics.

Ms. Wang Renhua, who had interviewed and reported on Wu Mengchao many times when she was young, specially sent the wreath, and she couldn't hide her sorrow.

She wrote a poem for Wu Lao: Who is the lancet to regain the courage, cry Si Gong in the depths of the hall.

She said that the friendship established in the interview has continued.

In the rain, wreaths and bouquets kept coming.

Xiao Li said that the first batch was delivered at half past six.

The money for the farewell ceremony of the remains, and the wreath bouquets sent by the people have been filled with the hedges in front of the Longhua funeral home hall.

A second-year high school student in Suqian wrote in his message: The doctors are diligent and simple, and the common people live with courage and courage.

... The great Grandpa Wu went all the way!

You and Grandpa Yuan will always be the brightest stars in the night sky!

The citizen flower offering place outside the hall.

Longhua Funeral Home is not the last stop for Grandpa Wu to leave the world.

After the body is cremated, Grandpa Wu's ashes will go to the Jiading New District of Oriental Hepatobiliary Surgery Hospital to take a look at his day and night concerns!

A doctor specially asked for leave to present flowers to Lao Wu.