Video .. Finding a fish that is 420 million years old!

A group of shark fishermen in South Africa have found a fish older than dinosaurs, which many in the scientific community believe to be extinct, as reported by the NewsWork newspaper. The newspaper added, citing the non-profit conservation platform Mongabay News, that the fish is Lean 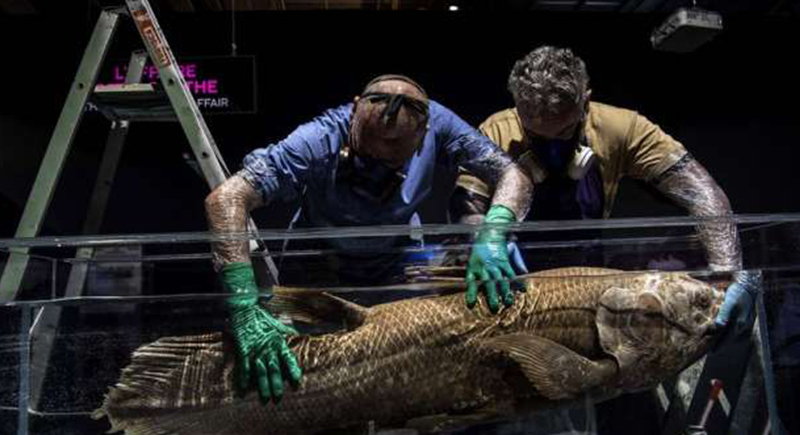 Video .. Finding a fish that is 420 million years old!

A group of shark hunters in South Africa found a fish older than dinosaurs, which many in the scientific community believe to be extinct, as reported by the NewsWork newspaper.

Citing non-profit conservation platform Mongabay News, the newspaper added that the four-legged fossil fish, known as the "colacanth," is alive and well.

Fishermen discovered the fish while on a fishing trip in the western Indian Ocean off the coast of Madagascar.

Fishermen were able to discover this type of fish thanks to their use of gill nets that are usually used in shark fishing trips, as these nets can reach fish populations at a depth ranging from 328 to 492 feet below the water surface.

Fishermen use these nets during some shark fishing trips to obtain their fins and oil.

The fish dates back 420 million years, and it was thought to be extinct until 1938.

A recent study in the SA Journal of Science indicated that coelacanths may face a new threat to survival with the increase in shark fishing, which began to flourish in the 1980s.

"There is no doubt that the large gill nets used to catch sharks are now the greatest threat to the survival of coelacanths in Madagascar," they write.

The study indicates that coelacanths are now at risk of "exploitation", adding that Madagascar is a hotbed of different types of these fish.