Media researcher: It is no coincidence that Israel bombed al-Jazira's premises

Israeli fighter jets have bombed three media houses in recent days and completely destroyed around 30 newsrooms. The attacks have been condemned by the outside world. Media researcher Alexa Robertson believes that is part of Israel's intimidation tactics where the purpose is to control the media image of the war. 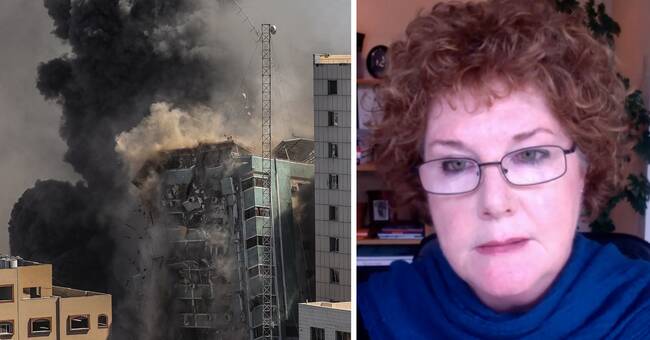 On May 12 and 13, Israel bombed two buildings that housed a total of about 20 newsrooms.

The latest attack took place on Saturday when an Israeli fighter jet bombed an office building, where about 20 newsrooms were located, including the AP and al-Jazira.

No one was killed but the house was completely destroyed.

- We've seen this before.

During the Gaza war in 2014, Israel targeted journalists and media companies in Gaza.

But it is more shocking and flagrant this time, that they bombed houses with such large media companies, says Alexa Robertson, media researcher at Stockholm University.

- Not what I know, but I think it would be pretty pointless because they would not access it, says Alexa Robertson.

The Israeli Defense Forces say Hamas had its military intelligence in the building, but that information has not been proven.

The attack has been condemned by the outside world and the United States has called on Israel to ensure the safety of journalists in the area.

There seems to be a tendency to try to silence and prevent us from knowing what is going on, says Alexa Robertson and continues:

- But precisely when it comes to this attack, no one thinks it was a coincidence that it was a media house where al-Jazira was.

Al-Jazira has been the most important media company to cover what is happening in Gaza.

Al-Jazira will never forget the Palestinians.

Wants to control the narrative

The warring parties often target the media during war.

Television companies' buildings are often the first to be taken over in a coup, says Alexa Robertson.

- It can be as much to try to deter as to try to control the image of what is happening.

War is fought not only with weapons but with stories, you want to try to control the narrative, she says.

Since the Vietnam War, it has become more common for military forces to try to control the media image of what happens in the war.

- Vietnam was a long time ago, every war has become more controlled in terms of media and more directed, so it is nothing new.

Today we have many other sources than state and social media, it feels a bit old-fashioned to try to control the media image in that way by bombing a media house.