"The most beautiful corpse" in Al-Mureijah Square ... a journey across history and generations

The Sharjah Art Foundation continues to present its exhibitions and artistic activities as part of its Spring 2021 program, through which it hosts works in contemporary art by influential artists from the Middle East, North Africa and South Asia, including the solo exhibition "The Most Beautiful Body" by artist Ryan Tabet. 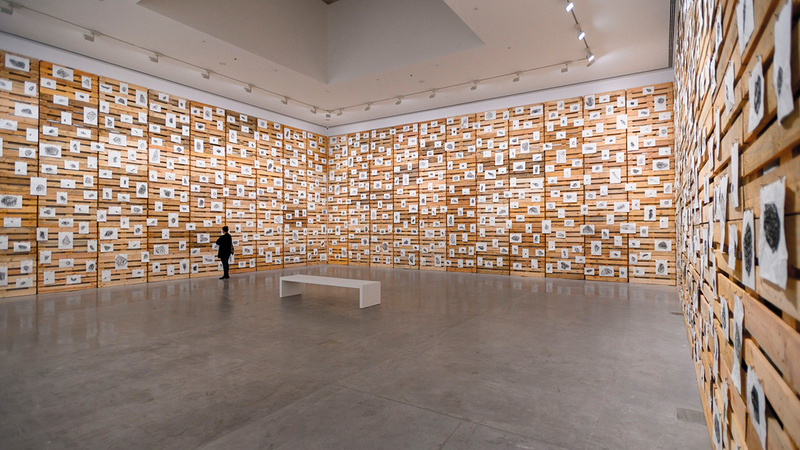 Within the Spring Exhibitions «Sharjah Art»

"The most beautiful corpse" in Al-Mureijah Square ... a journey across history and generations

Sharjah Art Foundation continues to present its exhibitions and artistic activities as part of its Spring 2021 program, through which it hosts works in contemporary art by influential artists from the Middle East, North Africa and South Asia, including the solo exhibition "The Most Beautiful Body" by artist Ryan Tabet, which will continue until June 15. , In the corridors (1, 2 and 3) of Al Mureijah Square.

The Tabet exhibition revolves around his project “Fatat”, which began work on in 2016 and is still continuing to develop. It is based on his personal vision and historical records, with the aim of exploring the archaeological excavation that Baron Max von Oppenheim led at the beginning of the twentieth century at the site of “Tal Halaf” The reality is in northeastern Syria, in which his great-grandfather, Faiq Burkhash, worked as a translator and secretary for Oppenheim for six months in 1929, and through this personal relationship and family connection, Tabet traces the history of that archaeological mission, producing stories that cross over time and generations.

In his recent work entitled “Portrait of Faik Boukhash,” Tabet collects parts of history through Burkhash's personal collections, his knowledge work, and his correspondence, in addition to the published works produced at a later time, which deal with his journey that he made in 1929, which lasted for six Months. Although Tabet was aware of his great-grandfather's involvement in the excavations, it was only when he visited the archive of the Max von Oppenheim Foundation in Cologne in 2016 that he discovered the field reports that Berkhash had made at the time.

These documents form the conceptual backbone of this work, and reveal a lot about the intertwines that existed between the early practice of archeology, ethnographic studies and colonial exploitation. Al Ain, Mardin, and Urfa, as well as his interviews with elderly Bedouins, as his questions provide insight into history, including myths, survival strategies, locations of water sources, and a description of the plant and animal world.

Through these interviews, Borkhash was also able to chart the family trees and the seasonal migration paths of the local tribes, and this knowledge was published in Oppenheim's famous four-volume study, called “The Bedouins,” which was later used as a weapon by subsequent Western military campaigns.

As for his work entitled "The Most Beautiful Corpse", it consists of a group of individual military tents hanging from the ceiling in an unorganized manner, which were used by the soldiers of Germany, Russia, France and the United States in many of the land attack sites that spread in North Africa, the Levant and the Gulf countries. Arab throughout the 20th century.

The work also includes a simple square-shaped design invented by the German army in 1899, very similar to the "bisht", a Bedouin clothing that can be converted into a temporary shelter when supported by wooden poles. We also see in the work larger and more complex tents dividing the exhibition space lengthwise, and a group of complex structures made of durable textile fabric, extending along the floor. In addition, for the first time, the artist integrates pegs, ropes, devices and various tools in the tents, arranging them according to type along the wall of the exhibition to form a path, or stream that is an exercise in cataloging, counting and studying these fierce and aggressive forms.

His work, “Basalt Fragments,” dealt with one of the Allied night raids on Berlin in November 1943, when the “Hilf Museum” founded by Oppenheim was hit by a phosphorous bomb that shattered a group of basaltic pieces (the wall - Hittite) into 27,000 pieces.

In 2001, the Pergamon Museum, which is the current curator of the pieces, launched a restoration and reconstruction project that was decided to complete within a period of 10 years. Most of the artifacts were successfully restored by collecting 26,000 pieces.

The remaining fragments, which cannot be identified or matched with any known artifact, form the basic material for Tabet's art installation, made up of 1,000 pieces encircled with charcoal, surrounding the visitors of the exhibition on three sides.

Each of the 1,000 pieces was wrapped in A3 or A4 paper, before passing a piece of charcoal over its surface. This process sharpened the edges of the jagged and jagged pieces and created formations with sharp black lines.

Ryan Tabet presents at the exhibition a new work under the title "Digital Alternatives", which is a digital archive on the Internet, presenting the documentation of artistic works, research materials and critical writings that he has collected since 2015, based on his desire to make these materials available and available to the public, and also considering the world Digital is the only space that can easily contain, and in one widely available platform, its artistic documentation based on image, text and time-based media.

• Tabet exhibition revolves around his project “Fatat”, which began work on in 2016.

• 15th of next June, the closing date of the exhibition.