Donors donated one million 250 thousand and 660 dirhams for the "Donate Your Life" initiative, which is adopted by Emirates Today, in cooperation with the Mohammed Bin Rashid University of Medicine and Health Sciences, and the Department of Islamic Affairs and Charitable Activities in Dubai. The initiative aims to support 38 patients with kidney failure. 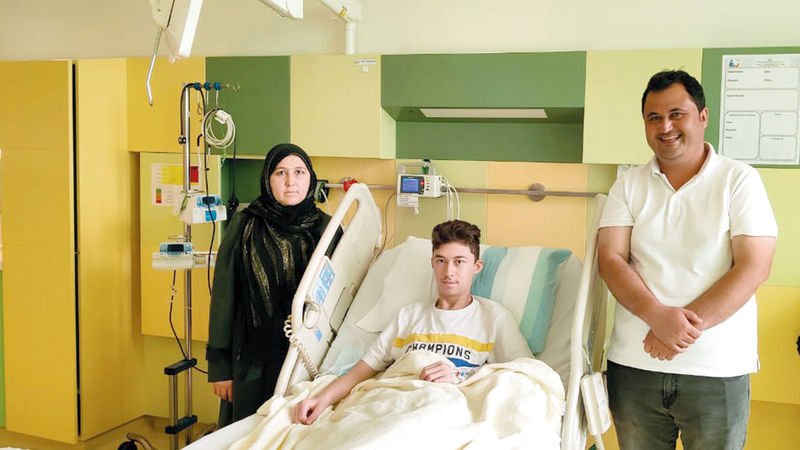 Donations for the initiative increased to 21.9 million dirhams

Donors donated one million 250 thousand and 660 dirhams for the "Donate Your Life" initiative, which is adopted by "Emirates Today", in cooperation with the Mohammed Bin Rashid University of Medicine and Health Sciences, and the Department of Islamic Affairs and Charitable Activities in Dubai.

The initiative aims to support 38 patients with kidney failure, and kidney transplantation for them in the Emirate of Dubai, at an amount of 22 million and 670 thousand dirhams, by motivating the private sector, businessmen and community members to adopt the initiative, and provide the necessary support to the target group.

The initiative includes a list of kidney failure patients in need of transplantation, including 14 children and 24 adults, and it includes various nationalities, including 13 citizens, a Gulf patient, three Arabs, a patient from the Comoros, and 20 Asians.

Donors contributed to the treatment and transplantation of kidneys for patients included in the initiative, in addition to providing the necessary medication and therapeutic follow-up to patients after the operation, and the operation will be performed for them and their treatment will be started at the Mediclinic Hospital in Dubai, and two patients are still waiting for assistance with their medical expenses.

This initiative comes within the newspaper’s initiatives in the blessed month of Ramadan, as the volume of donations to it since its launch so far has reached 21 million 960 thousand and 660 dirhams, sufficient for the treatment and transplantation of kidneys for 36 patients.

The cost of transplantation for one child is 565 thousand dirhams, and the operations will be performed for them at Al Jalila Children's Specialty Hospital, and the cost of transplantation for the patient, amounting to 615 thousand dirhams, will be performed for adult patients at Mediclinic Hospital in Dubai.

The Executive Director of the Charitable Work Sector at the Department of Islamic Affairs and Charitable Activities in Dubai, Ahmed Darwish Al Muhairi, appreciated the participation of the community from the public and private sectors, businessmen and individuals, to leave a living impact on the souls of patients with kidney failure included in the initiative «Your donation is a life», which was launched at the beginning of the month of Ramadan The blessed one, as it met with an impressive and successive turnout of contributions that will help the aforementioned groups and their families to overcome their suffering and relieve them of pain in this holy month, indicating that the initiative witnessed the extension of white hands in a way that reflects the generous approach rooted in Emirati society.

Al Muhairi added that humanitarian work, which is related to the concepts and principles of solidarity and solidarity, is part of the values ​​and culture of the UAE, to alleviate human suffering, stressing that community initiatives are a link between society in its various segments and the beneficiaries of various spectrums, to achieve a lofty and noble message of human advancement wherever he is.

Deputy Director of the Mohammed Bin Rashid University of Medicine and Health Sciences for Administrative Affairs and Professional Services, Dr. Amer Mohammed Al-Zarouni, said: “We sincerely thank the people of merciful hearts and white hands, who with their donations will be able to restore hope to the insolvent cases of patients with kidney failure, and we also thank all individuals and institutions Which contributed to support the initiative that continued throughout the blessed month of Ramadan, and those who set the most amazing examples in haste and the initiative to give and give, and demonstrated their commitment to our leadership's approach to goodness and humanity.

Emarat Al-Youm Editor-in-Chief, Colleague Sami Al-Riyami, said: “We thank individual donors since the launch of the initiative for their donation and support of one million 250 thousand and 660 dirhams for the benefit of the initiative (Your Donation is Life). Cases ».

He added that "the amount of donations reached 21 million 960 thousand and 660 dirhams, sufficient for the treatment and kidney transplantation of 36 patients," noting that "the initiative has completed its 27th day since its launch at the beginning of the holy month of Ramadan, and has achieved a good number in the volume of donations to this community initiative", calling on institutions And individuals in the state to support this community initiative.

• Two patients waiting to be supported with treatment expenses.