Violent flares in Proxima Centauri, the closest star to the Sun

The astronomer Rafael Bachiller reveals to us in this series the most spectacular phenomena of the Cosmos. Topics of exciting research, astronomical adventures and news ... 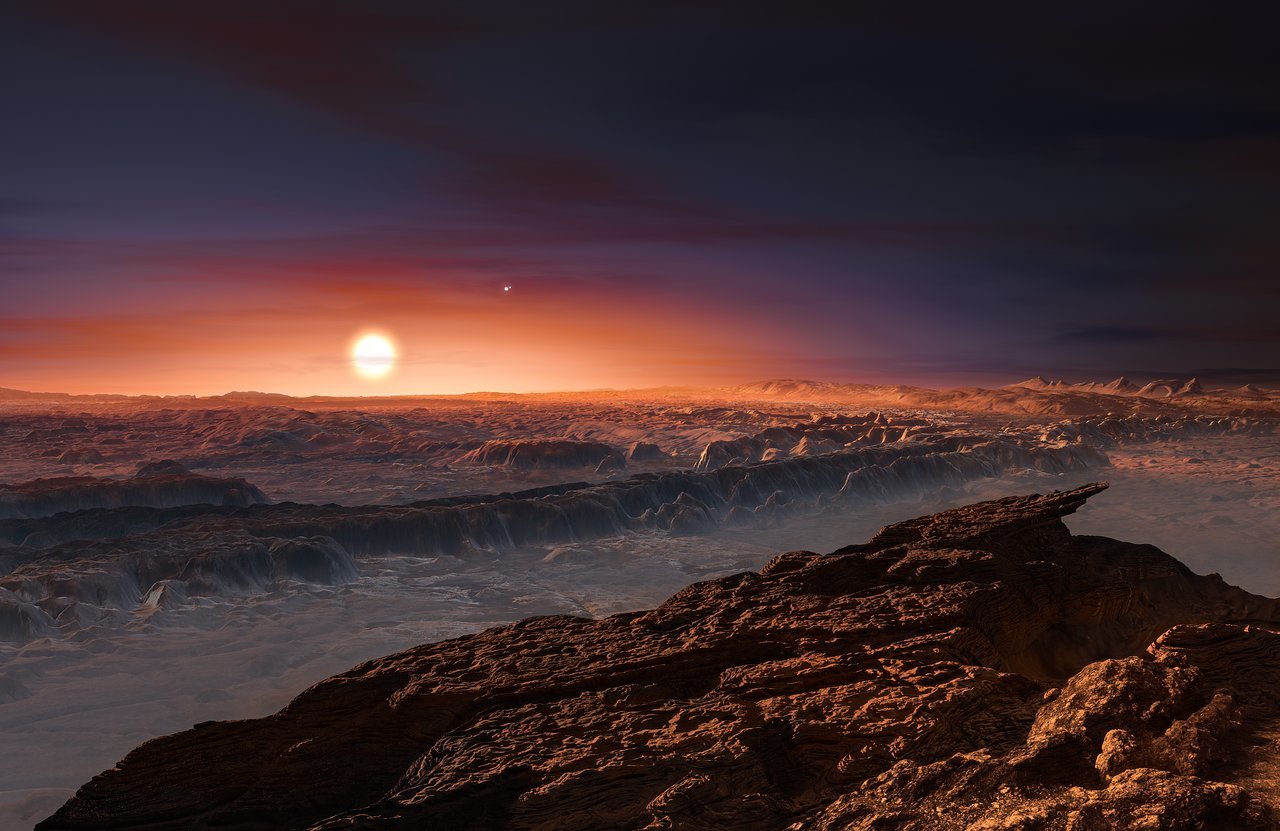 Large flares observed in Proxima Centauri make it very difficult for life to exist on its exoplanets, the ones closest to Earth.

Located just 4.2 light years away, Proxima Centauri is the closest star to the solar system. It is part of a triple star system: the stars Alpha Centauri A and B are relatively close together, while Proxima (also known as Alpha Centuri C) is further away from that pair, orbiting around it with a period of half a million years. As its name indicates, this triple system is located in the southern constellation of the Centaurus, so it is only visible below a terrestrial latitude of about 27 degrees.

Proxima Centauri belongs to the class of red dwarf stars.

Its diameter is 7 times smaller than that of the Sun. However, its average density is 33 times higher than the solar one.

The star is reddish in color but its discreet brightness does not make it visible to the naked eye, so it was not discovered until 1915, when astronomer Robert Innes pointed his telescope in that direction from South Africa.

As early as 1951, the great Harlow Shapley announced the discovery of large variations in its brightness, and those variations, along with its proximity, have made this little star a favorite with astronomers.

Such surges in brightness are associated with violent activity in the stellar atmosphere.

Interest in Proxima Centauri grew in 2016, when a team coordinated by Spanish astronomer Guillem Anglada-Escudé discovered that the small star had a rocky exoplanet called Proxima Centauri b. With characteristics similar to those of Earth, the planet is located in the so-called habitability zone, a region in which, in principle, conditions are favorable for the emergence of life.

Signs of the existence of two other planets (Proxima Centauri c and d) were soon found.

Planet c is more massive (it is super-Earth type) and orbits farther from the star than planet b, while the real existence of planet d has not been fully confirmed.

Obviously the planetary system of Proxima Centauri is one of the most interesting for humanity because of its proximity to our Earth and that is why its study has become a priority objective for astronomers.

Recreation of the exoplanet Proxima Centauri b, with the triple star system seen on the horizon ESO / M.Kommesser

Since its erratic brightness variations were discovered, Proxima Centauri has been observed with all kinds of telescopes. The brightening is accompanied by intense X-ray and ultraviolet emissions, which led to the belief that such episodes are similar to the flares seen on the Sun. In the early 2000s, it was found that such flares could be much more frequent and much more violent than those we see in the Sun. In 2016 Ward Howard and colleagues observed several super-flares, one of which made the star visible to the naked eye (

was published in 2018). The authors have already concluded that, on average, the star could experience more than 5 large flares per year.

These results led Meredith MacGregor (Univ. Of Colorado at Boulder) to coordinate a Proxima Centauri observing project with various telescopes of different types, including radio telescopes. On May 1, 2019, five large telescopes, including the Hubble Space Telescope and the large array of ALMA radio telescopes at Atacama, all pointed at Proxima in unison. And what they detected was extraordinary. For about 10 seconds, the stellar brightness increased by a factor of 14,000 in the far ultraviolet (observed with Hubble) and by a factor of 1,000 in millimeter wavelengths (observed with ALMA).

If these flares are similar to solar flares, they must be accompanied by large ejections of coronal material (plasma at very high temperatures).

However, at the moment, this is only an assumption, as no one has so far observed such ejections of matter directly from a star other than the Sun.

On the Sun, flares are clearly associated with magnetic phenomena.

Electrons in the solar corona rotate around magnetic lines and emit photons at millimeter wavelengths.

These phenomena are presumably similar in Proxima Centauri.

But, in this star, the millimeter wave emission is 100 times higher than in the Sun, which leads us to think of huge ejections of coronal material.

To find out if the flares are of the same type in both stars, it would be convenient to detect the particles that are ejected from Proxima and compare them with those that reach Earth during solar storms.

But, although Proxima is so close (4.2 light years away), we do not have particle detectors sensitive enough to study its ejections of matter.

Your exoplanets, not so promising

In view of all the above, the prospects for finding life on the planets that orbit Proxima Centauri cannot be optimistic.

The intense flow of ultraviolet radiation and X-rays, together with the violent flares, seems to have the ability to destroy any atmosphere that these planets may have possessed, especially that of the Proxima Centauri b, which orbits very close to the star.

So, although they are the closest exoplanets, it seems that those of Proxima Centauri are not, after all, the most promising when it comes to finding neighboring and living extraterrestrials.

Fortunately, within a radius of about 40 light-years from Earth, there are still a handful of more promising exoplanets.

The manuscript can be consulted at

(National Geographic Institute) and academic of the

Climate crisis2020, a record year for heat and rain in Europe

ScienceThe rain of stars of the Lyrids is coming, the phenomenon of spring: Schedule and the best time to see them