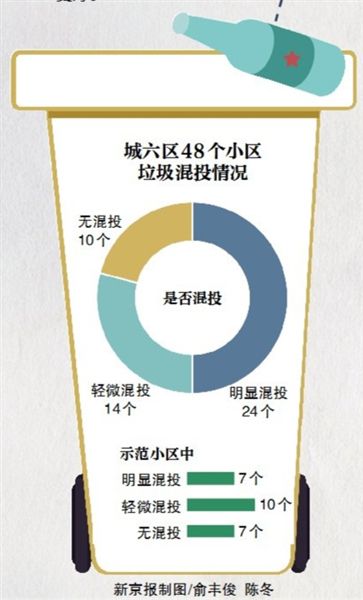 "Mixed investment" of garbage still exists in kitchen waste, the most obvious

On April 19, there were many plastic bags in the kitchen waste bins in the fourth district of Zifangyuan, Fengtai District.

On April 21, in the Shouchuang Aizhecheng Community, a soy sauce bucket was placed on the kitchen waste bin.

On the anniversary of the implementation of the new version of the domestic waste management regulations in Beijing, a reporter from the Beijing News investigated 48 communities in Beijing, including 24 waste classification demonstration communities.

Is the mixed waste of waste in the small area serious?

What items are easy to divide wrong?

Does the community have a "remedial" mechanism?

The reporter investigated 48 communities and found that half of the communities had obvious mixed investment.

The secondary sorting of garbage in each district is common, and it is carried out by the sorting instructor and the cleaner.

The reporter also found that there are people on duty at the barrel station in the community, and the classification effect is better.

What items are easy to divide?

At a garbage station in Chaoyang District's Shouchuang Aizhecheng Community, residents' shoes were thrown into hazardous garbage bins, and a resident who had just left the house put the used soy sauce bucket directly on the kitchen waste bin with the lid not opened.

The mixed investment situation in Guangxi Li of Dongcheng District and Yuandayuan District 6 of Haidian District is serious.

Some demonstration communities for waste classification also performed poorly in this respect, and mixed investment is obvious.

The fourth district of Zifangyuan in Fengtai District is a demonstration area for garbage classification. There are many plastic bags in the kitchen waste bins, including paper cups and biscuits packaging bags.

The situation in the Xibianmen Dongli community in Xicheng is not optimistic, especially the mixed investment of food waste.

Who will "remedy" after dividing the error?

Among the 48 communities, most of them are sorted twice by the garbage sorting instructor.

In the Xinjingjiayuan district of Dongcheng District, the reporter opened the food waste bin and found that the food waste was thrown in broken bags.

According to community staff, these were sorted twice.

According to observations, many residents still put garbage in mixed waste, and the kitchen waste is also carried in bags. However, they generally do not directly throw the bags of kitchen waste into the trash can, but put it in the trash can. Cover it to facilitate the second sorting by the cleaning and transportation personnel.

In some communities, garbage collectors are sorting, mainly from the pressure of garbage transfer stations.

The classification effect of the manned bucket station is better

However, the classification situation is better at bin stations where a garbage sorting instructor is on duty than unattended bin stations.

Master Zhang stepped forward to stop it, took the garbage from the residents, and helped him sort it out.

The elderly are relatively more enthusiastic about garbage classification

Master Zhang from the third district of Fangxingyuan said that in the past one year since the community started garbage sorting, the elderly and parents with children have done a good job sorting garbage. “Workers and young people are still struggling to sort garbage.”

Aunt Du of Zhengxinyuan District, Fengtai District, recalled that residents' willingness to sort garbage has increased a lot in the past year. At present, more than half of the residents can actually participate in garbage classification. Among them, the elderly are more motivated to classify and get more detailed points than young people. .

The reporter observed 9 residents who came to throw garbage in the morning, and 5 of them did garbage classification, which was basically the same as Aunt Du's estimate.

But there are also young people in the community doing better.

In the Dongli community of Xibianmen, Xicheng, the mixed investment in the trash can is obvious, but individual young people will do some sorting.