Reunited with children after being separated for decades, three mothers get the best "holiday gift"

Chinanews.com, Xiamen, May 9 (Li Siyuan and Xu Tianxiang) "I finally found it after 22 years. I thought I would never see you again in my life." The Tian couple came to Xiamen from Guizhou to see their long-lost son. Embracing and crying, the emotions that had been suppressed for more than 20 years were released. The picture shows the "Reunion" operation organized by the Xiamen Municipal Public 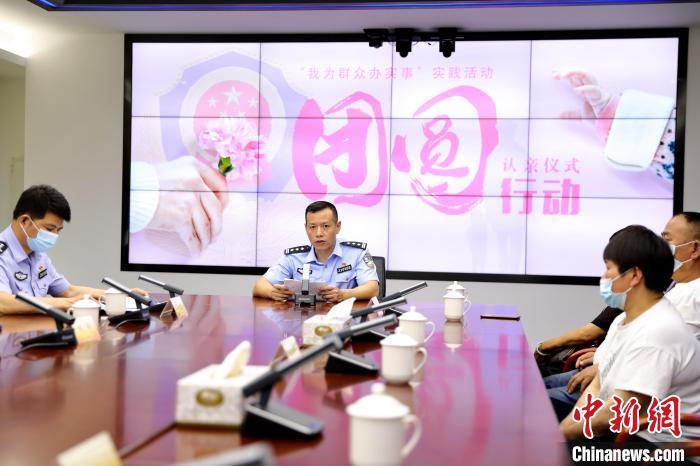 Chinanews.com, Xiamen, May 9 (Li Siyuan and Xu Tianxiang) "I finally found it after 22 years. I thought I would never see you again in my life." The Tian couple came to Xiamen from Guizhou to see their long-lost son. Embracing and crying, the emotions that had been suppressed for more than 20 years were released.

On the eve of Mother's Day, three mothers over half a hundred years old came from Guizhou, Hunan and other places to meet and recognize their lost flesh and blood at the "reunion" operation organized by the Xiamen Public Security Bureau, and harvested the best "festival". gift".

22 years, 28 years, and 30 years are time scales, but there are scars that cannot be erased in the hearts of the three parents who lost their children.

The picture shows the couple surnamed Yuan and their son for the first time after 30 years.

"Being carried away in less than two hours, our feelings in the past 30 years cannot be described in words. Wherever there is a little bit of clues, we must go and find them." Recalling the day when we were separated in 1991, from Mr. Yuan from Guizhou couldn't help hiding his face and crying. Back then, Mr. Yuan's neighbor was hosting a banquet and he went to help, leaving his 5-year-old son to play at home.

After finishing the work, he found that his son was missing. Mr. Yuan's family searched everywhere, and the search lasted 30 years.

Seeing her grown-up son, she quickly approached and delivered a bouquet of carnations. Mrs. Yuan cried loudly and could no longer conceal her inner pain for many years. "In order to find my son, I drove to our city of Guiyang because I was prone to motion sickness. I went down and walked a few kilometers later. We have been looking for him all the time for so many years. Now I am very happy that my 30-year wish has finally come true."

In 2015, Mr. Yuan and his wife were mobilized by relatives to collect blood samples from the local police in Guizhou and recorded them in the anti-trafficking database.

In March of this year, the Haicang Branch of the Xiamen Municipal Public Security Bureau found a middle-aged man’s blood sample from a middle-aged man in the jurisdiction in the information system for searching for abducted and missing children. At the end of March, it was confirmed by a DNA review test. The man is the separated son of Mr. Yuan and his wife.

The picture shows the couple surnamed Tian and their 22-year-old son embracing and crying.

"We use modern technology, big data resources, and DNA data to try our best to reunite more families." Xie Yiyong, deputy head of the Criminal Investigation Division of the Xiamen Public Security Bureau, told reporters that in January this year, the Ministry of Public Security organized a unified organization of local public security organs. The "Reunion" operation focused on the detection of accumulated cases of child abduction and the finding of missing and abducted children.

The Xiamen police combined with the education and rectification of the political and legal teams and the "I do practical things for the masses" practical activities to further promote the "reunion" operation and achieved remarkable results.

The children of those years have now married and become parents. Mr. Yuan and his wife have finally let go of their 30 years of hanging heart. They came to Xiamen from Guizhou by car. Mr. Yuan, who has been tight for days, patted his son who is taller than himself, "Don’t worry. Live your way. I just came over to see you and tell you that we have not given up for so many years." Mr. Yuan laughed and said that he could sleep peacefully when he returned. Both he and his wife hope that their son can continue to work and live in Xiamen, safe and healthy. ,happiness.

After the confession ceremony, in the office of the Public Security Bureau, Mr. Yuan and his son left their first group photo in 30 years.