Box office increased by 252%! Has the music festival ushered in a big explosion?

Chinanews client, Beijing, May 8th (Reporter Ren Siyu) Has the music festival, which is sought after by young people, ushered in a big explosion?   On May 6, Damai released the "2021 May 1st Performance Observation". The report showed that during the May 1st holiday, there were more than 3,800 offline professional performances. Among them, the box office of Livehouse, talk show, and music festi 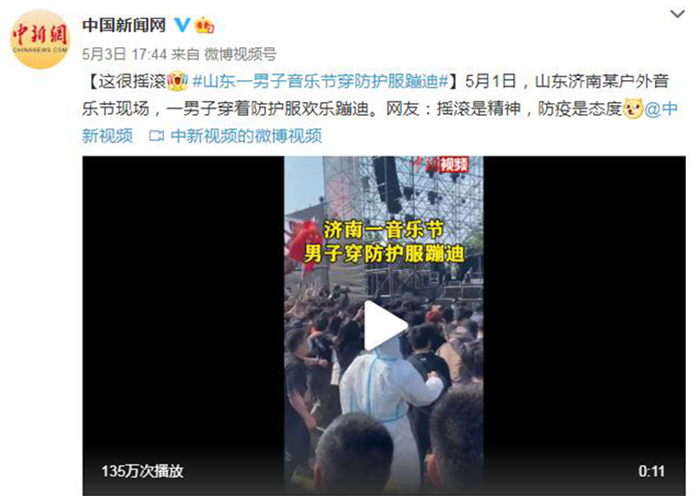 Chinanews client, Beijing, May 8th (Reporter Ren Siyu) Has the music festival, which is sought after by young people, ushered in a big explosion?

On May 6, Damai released the "2021 May 1st Performance Observation". The report showed that during the May 1st holiday, there were more than 3,800 offline professional performances. Among them, the box office of Livehouse, talk show, and music festival compared with the same period in 2019. , The increase rate is more than 250%.

On social networks, topics such as "Qin Hao watched Yi Nengjing's performance", "Faye Wong lost his hat again at the Strawberry Music Festival", and "Shandong a men's music festival wearing protective clothing and jumping di" have been on the hot search list successively. The music festival, regarded as a niche entertainment activity, has begun to become one of the lifestyles that everyone loves to hear.

From last year's "November" holiday to this year's "May 1st" holiday, music festivals have become more and more popular items for people to travel and entertain.

According to data, over 40% of users choose music festivals as their first choice for vacation and leisure during the "May Day" holiday this year, and 60% of users who buy music festivals choose to watch performances across cities.

The 2021 Beijing Strawberry Music Festival will be held in Beijing Expo Park.

While music fans are busy "catch the stage" of the festival, musicians are even more busy "clone". According to the public itinerary of the Wutiaoren band, they moved to Changzhou, Shanghai, Nanjing, and Beijing to participate in the festival in four days. It's our labor," they lamented on Weibo.

According to data from Barley, there were 56 music festivals nationwide during the five-day holiday, an increase of 37% over the same period in 2019. Box office and attendance increased by 252% and 173% respectively year-on-year.

Source: Damai "Observation of May 1st Performance in 2021".

Can you watch the music festival at your doorstep?

Another new change that can be found from this year’s "May 1st" holiday is that the festival is opening up "new territories" on a large scale.

Compared with 2019 and 2020, this year's music festivals can be described as blooming everywhere. Major brand music festivals are not only concentrated in cities such as Beijing and Shanghai, but also sinking to second- and third-tier cities such as Binzhou in Shandong, Changzhou in Jiangsu, Jiaozuo in Henan, and Wanning in Hainan.

Another noteworthy phenomenon is that music festivals are becoming a "hard sign" for some cities to build cultural tourism brands and channel traffic for holidays.

For example, the Shandong Jinan Midi Music Festival and Binzhou Midi Music Festival, which were popular during the "May 1st" period this year, are backed by strong support from the local government in terms of policies and supporting services.

According to media reports, before the Binzhou Midi Music Festival began, the local area completed the leveling of more than 280 acres of ground, 18,000 square meters of turf, more than 7,000 parking spaces, and more than 3,000 meters of fence in the early stage of the music festival. Construction, the construction of more than 140 toilets and the preparatory construction of various functional areas such as camping and drinking water areas; and in order to cooperate with the Jinan Midi Music Festival, Jinan Metro also extended the operating hours of Line 1, 2, and 3 to 24:00, Adjust the driving interval to 10 minutes between 22 o'clock and 24 o'clock.

The consumption drainage brought by the music festival is also considerable.

According to statistics from the organizer, the Jinan Midi Music Festival’s music fans from outside the province account for about 65%. It is roughly estimated that cultural and travel-related consumption during the local holiday period will increase by about 20%.

According to data from Barley, during the May 1st holiday this year, the Hainan Wanning Riyue Bay M_DSK Music Festival also made the county-level city Wanning rank among the top ten in the country.

What kind of music festival does the audience need?

But with music festivals blooming everywhere and tickets rising, is the audience experience fully satisfied?

From last year's National Day to this year's "May 1st" small holiday, the topic of rising music festival ticket prices is often mentioned by people.

As for the reasons for the increase in music festival prices, industry insiders have analyzed that on the one hand, the number of tickets sold under the epidemic prevention and control policy is limited, on the other hand, the production costs of various aspects are getting higher and higher, especially the appearance fees of some artists. With the blessing of bands and rap variety shows, the value of some musicians has risen sharply. In addition, pop singers with their own popularity and fans have joined, which not only increases the popularity of the festival, but also raises ticket prices.

Although the consumption enthusiasm of the music festival is not diminished, the audience also has higher requirements for on-site service and performance experience.

Affected by the global epidemic, the homogeneity of the music festival's performance lineup has become more and more obvious.

In the absence of overseas artists, head musicians such as new pants, the right to admire, and the right to reshape statues, and Gojo are performing in various places. At the festival, most of the audiences see old acquaintances rather than fresh faces. How about Playing new tricks on the lineup and collocation of the music festival is one of the issues that the organizer needs to consider.

Music festivals are usually held outdoors, so in addition to the performance lineup, on-site acoustics, security, transportation, accommodation, water supply and toilets are also issues that the audience are very concerned about. Every year, there are always some music festivals that encounter netizens after the end. The large-scale complaints, and the experience of the music festival has a strong impact on everyone's impression of a city.

What kind of music festival do music fans like?

The Spring Outing Music Festival held in Sichuan in April this year has gained a good reputation. Although the scale is not huge, the atmosphere is relaxed enough. The audience can eat hot pot, play mahjong, and set up tents. On-site security is not a fierce confrontation with fans, but As young people dance and sing together, feel the joy of music together.

With the recovery of the offline performance market, it is foreseeable that there will be more and more music festivals in the future. At the same time as the competition becomes more fierce, the organizers should start from the needs of the audience and use more complete Supporting services allow music fans to fully feel the spiritual satisfaction of the festival. (Finish)