Some 175 Palestinians and six Israeli policemen were injured in the holy city on Friday. This is one of the biggest clashes in recent years in occupied East Jerusalem ... 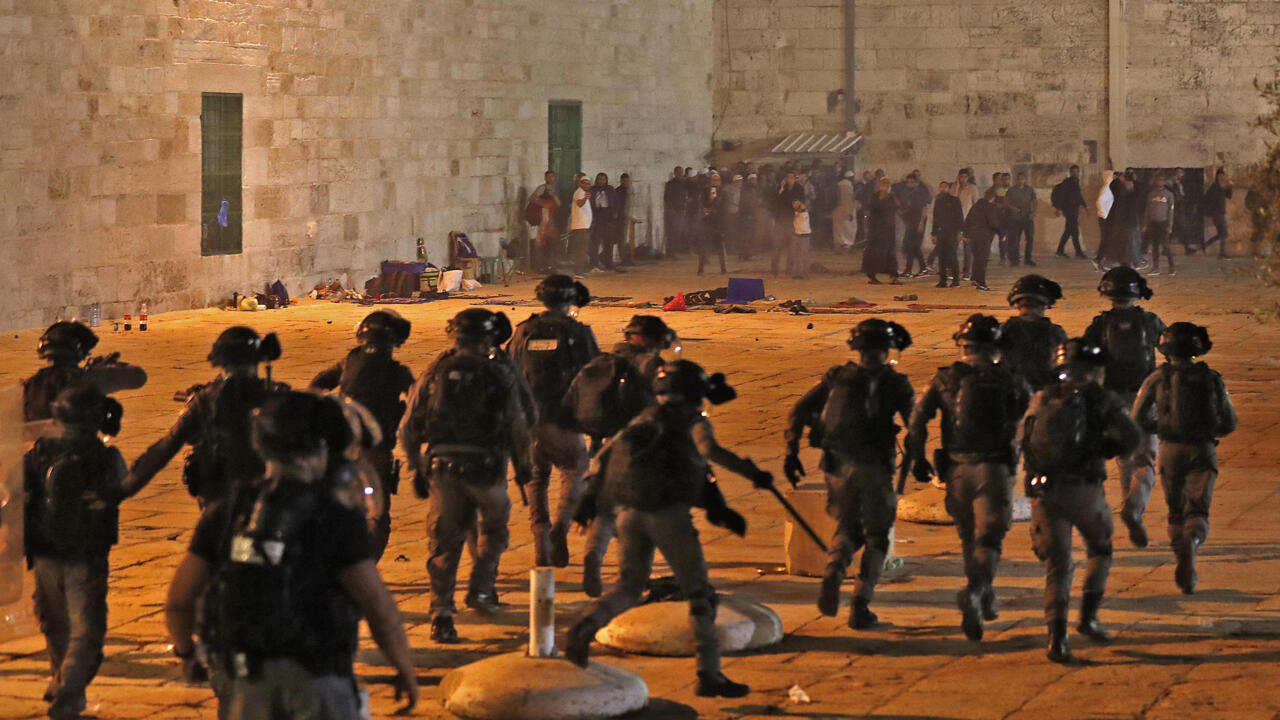 More than 175 Palestinians and six Israeli police officers were injured on Friday, May 7, most of them on the Mosque Esplanade, in the biggest clashes in recent years in occupied East Jerusalem, the scene of renewed tension that worries until Washington.

Tens of thousands of worshipers gathered in the grounds of the Esplanade des Mosques - called the Temple Mount by the Jews - for the last great Friday prayer before the end of the month of Ramadan.

But clashes erupted between Palestinians, who threw projectiles, and Israeli police who used stun grenades and shot protesters with rubber bullets, an AFP photographer noted.

He also saw a dozen demonstrators wounded in the face.

"Hundreds of rioters threw stones, bottles and other objects in the direction of the officers who retaliated", indicated the Israeli police, whose spokesman, Wassem Badr, referred to "violent disturbances".

Clashes also took place in the nearby neighborhood of Sheikh Jarrah, where daily nightly demonstrations against the possible eviction of Palestinian families in favor of Israeli settlers have escalated in recent days into clashes with the police.

A fragile calm seems to have returned overnight in East Jerusalem, the Palestinian part of the city occupied by Israel since 1967 and then annexed, AFP journalists noted.

According to the Palestinian Red Crescent, at least 178 Palestinians were injured on Friday evening, most of them on the Mosque Esplanade.

The Israeli police reported six wounded in these ranks.

These demonstrations are the most violent in Jerusalem since the clashes that injured 125 at the end of April, but also since clashes related to the transfer in 2018 of the United States embassy to the disputed city, or even to those in the summer of 2017 related Israel's installation of metal detectors at the entrance to the Esplanade, Islam's third holiest site.

Key allies of Israel, the United States on Friday called for the "de-escalation" of tensions and "avoid" the eviction of Palestinian families.

US State Department spokesman Ned Price warned on Friday that it was "essential" to avoid any action that could worsen the situation, such as "expulsions to East Jerusalem, settlement activities, demolitions houses and acts of terrorism ".

The UN coordinator for the Middle East, Tor Wennesland, said he was "deeply concerned" by the situation and called for "responsibility" and "calm".

"We hold Israel responsible for the dangerous developments in the Old City," said Mahmoud Abbas, the Palestinian president, describing the Palestinians gathered on the Mosques Esplanade as "heroic people".

The armed Palestinian Islamist movement Hamas, in power in the Gaza Strip, called on the Palestinians to stay on the plaza from Saturday evening to Thursday morning, when Ramadan could end.

"The Israeli occupation must realize that the resistance is ready to defend (the mosque) Al-Aqsa at any cost," Hamas said, while Israeli Arab parties have called for protests in predominantly Arab towns of Israel.

Jordan, the country which is officially the guardian of Muslim holy sites in East Jerusalem, has denounced "savage aggression" by Israeli security forces.

Tensions in the West Bank

The new violence comes against a backdrop of heightened tensions in East Jerusalem but also in the West Bank, another Palestinian territory occupied by Israel since 1967.

Earlier in the day, Israeli forces killed two Palestinians and wounded a third, who opened fire on border guards in the northern West Bank, without claiming Israeli casualties.

At the end of April, hundreds of people had already been injured during several nights of clashes between Palestinians and Israelis on the outskirts of the Old City of Jerusalem.

Friday's violence coincided with "Al-Quds Day (Jerusalem in Arabic)" celebrated annually in countries in the region and mainly in Iran, Israel's nemesis, in support of the Palestinians.

In Tehran, Ayatollah Ali Khamenei, Supreme Leader of the Islamic Republic of Iran, advocated the fight against Israel, described as a "terrorist base".

For him, the "fall of the enemy Zionist regime" is inevitable.