The Sharjah Children's Reading Festival in its 12th session, organized by the Sharjah Book Authority from 19 to 29 May, at the Sharjah Expo Center, will host a group of Arab writers and artists in a series of dialogue and discussion sessions that bring them together with their counterparts participating from different countries of the world 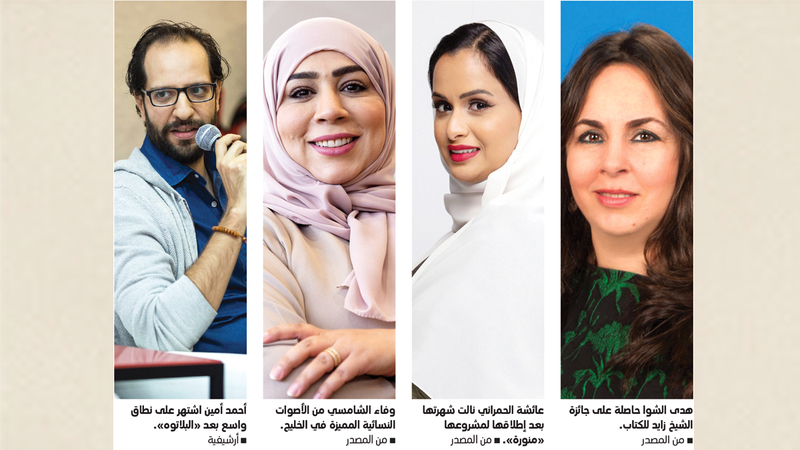 They participate in real and virtual sessions

The Sharjah Children's Reading Festival, in its 12th session, organized by the Sharjah Book Authority from 19 to 29 May, at the Expo Center Sharjah, hosts a group of Arab writers and artists in a series of dialogue and discussion sessions that bring them together with their counterparts participating from different countries of the world, some of which are held on On the ground, and another "remote" through visual communication.

The festival, which opens its doors this year, hosts the Egyptian comedian Ahmed Amin, who has worked in many artistic fields as an actor, author and presenter, and gained his fame by presenting short videos on the Internet under the title "30 Seconds". His star also shone through the "Plateau Program." »Which is shown on the Egyptian satellite channel Al-Nahar.

The writer of children's stories and plays, Nasreen Jaafar Al-Nur, is participating from Bahrain, who has a lot of cultural and creative contributions to her account, as she presented story and art workshops for students, and she has many contributions in the most prominent magazines and appendices specializing in children, such as Al-Arabi Al-Sagheer Magazine and the Kuwaiti News Children Supplement. And others, and she has many publications, including "We Return, Oh Jerusalem," and "The Story of the Artist and Helping Colors."

From the Sultanate of Oman, poet Dr. Wafaa Al Shamsi is a guest of her readers, who is considered one of the distinct female voices in the Gulf and Arab literary and creative milieu, as she has published a series of poetry, short and theatrical works that have awarded her prestigious prizes, such as the award for best authorship at the Emirates Festival for Child Theater. And the first place in the Arab world in the series of cultural books for children for the year 2016, and other titles.

And from the UAE, the festival will host the digital artist and designer Aisha Al-Hamrani, who gained artistic fame through social media platforms, after launching her art project "Munawara", which she presented with modern and innovative drawing techniques, reflecting an exceptional peculiarity in the presentation that was inspired by childhood memory.

Also from Egypt, the storyteller, novelist and writer of children's literature Al-Tayyib Adeeb, owner of the story group “The Departure of the Acacia”, “How to Raise Our Children”, and other works that led him to be a member of many literary competition competitions will participate.

Fida Al-Zomor, the Jordanian writer specializing in child literature, the author of many fictional and theatrical publications with tangible contributions in the literary arena for which she has received many prizes, most notably the International Islamic Organization for Science, Education and Culture (ISESCO) Prize for the story "Childhood Dreams" will fall to the event. The prize for best short story for "The Tale of Zaitouneh", and other prestigious awards. The festival will be attended this year by the Egyptian writer Amr Samir Atef, author of several series directed at children, and the Iraqi doctor and theater critic Hussein Ali Harf, an expert in childhood and youth affairs, child theater, puppet theater and school theater, and a member of the Board of Child Welfare Authority in Iraq. They are accompanied by the writer, who won the Sheikh Zayed Book Award for her children's story "The Journey of Birds to Jabal Qaf", the Kuwaiti Hoda Al Shawa Kaddoumi.

The event will be hosted by writer and journalist Faraj Edgham Al Dhafiri, a researcher specializing in children's literature and culture, who has written the story and script for several Arab children's magazines, such as Majid and Al Arabi Al Saghir magazine, among others, and has also participated in writing many television works, and has designed a group of successful personalities in children's literature magazines.

The writer and academic Heba Ismail Mandani, who is the author of many books, participates in the Sharjah Children's Reading Festival in its 12th session, including the story group "My Best Days", the novel "Some of the tenderness", and the story of "Ahmed and the Championship Cup", which won the third place in the Gulf Excellence Award In health media, and first place in the Rashid bin Hamid Prize for Culture and Science.

The famous comedian Ahmed Amin participates in the festival's dialogues.

Hoda Al Shawa Qaddoumi, winner of the Sheikh Zayed Book Award, is a guest at the event.