Netflix unveils its new series "Jupiter's Legacy" on Friday. It features aging superheroes in an America in crisis. Adapted from a comic book by Mark Millar, this political work approaches the disintegration of modern societies and the generation gap with an unexpected nuance. 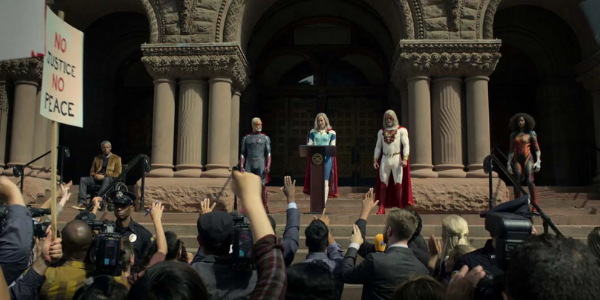 It features aging superheroes in an America in crisis.

Adapted from a comic book by Mark Millar, this political work approaches the disintegration of modern societies and the generation gap with an unexpected nuance.

Can superheroes and politics go hand in hand?

This is the central question of

, a new heroic series airing on Netflix from May 7.

Adapted from comics published in 2013, it has the particularity of featuring characters that have nothing to do with the usual Marvel or DC Comics superheroes.

The costumed vigilantes of the series are those of the Union, a group created in the early 1930s by a group of friends who gained powers on a mysterious island.

Decades later, they have aged and no longer seem suited to the modern world.

Will they leave their place or will they hang on at all costs?

For superheroes, is old age a super shipwreck?

The first originality of

is to present aging superheroes.

With his long white hair and checkered shirts, Union leader Sheldon Sampson aka Utopian looks more like an old lumberjack than Superman.

Along with his brother Walter, aka Brainwave, it was he who founded the group of heroes in the aftermath of the Great Depression, when his father's business had gone bankrupt and America was on the brink of collapse.

The series alternates between the present day and flashbacks in the 1930s recounting the discovery of their powers by the six members of the Union.

Afterwards, Sheldon and his friends saved the world for decades.

But the weight of the years is catching up with them: their hair is turning white, their powers are weakening… Above all, they no longer recognize an America in the midst of a social and economic crisis.

"Despite all these years, despite all that we have sacrificed, the world is falling apart," laments Utopian, disillusioned, in the first episode.

Far from being a fun comedy of the gap between these superheroes with the glorious past and an era that escapes them,

the political parable and questions the role of superheroes. The series thus questions, from the opening scene, the famous maxim of Spider-Man: "great power implies great responsibility". Yes, but how far? How far should superheroes get involved in society? The subject divides Walter and Sheldon, the two founding brothers of the Union, and constitutes the knot, skillfully knotted, of the story.

Very quickly, the series opposes two visions of the superhero.

On the one hand, Utopian clings to the ideal of apolitical vigilantes and to its "code": "we don't kill, we don't lead, we inspire".

Partisan of free will, traumatized by the memory of his comrade Skyfox who became a terrorist in the name of his ideals of justice, he assumes not to have intervened during the Second World War or in Vietnam.

Opposite, his brother Brainwave no longer supports this wait-and-see attitude.

Believing that the world is changing and that evil is nestled in the heads of corrupt politicians, crooked industrialists and mass killers, he would like to get more involved in politics to redress the bar of a sinking world.

Far from being binary, this opposition goes beyond the super-heroic framework of the series.

is first and foremost a sharp criticism of our world, targeting in particular the ineffectiveness of political action and the slow slippery slope towards all security.

Free will or "wise" control of the masses?

Each spectator will find himself in one or the other of the two visions of the company proposed by the series.

It may come as a surprise, but here words hit harder than fists.

Fortunately, moreover because the fight scenes are generally failed, the fault of a clumsy staging and special effects a little "cheap".

Hard, hard to be a child of superheroes

More talkative and political than action-

, another critical work of the superheroic genre.

But it differs from it by another major theme: the transfer of power between generations.

In addition to his personal questions about his role, Sheldon must manage his two children, Brandon and Chloe.

The first tries to follow in his father's footsteps in front of a superhero, the Paragon.

Clumsy and weaker than his father, he unfortunately does not find favor in the eyes of his father who teaches him daily moral lessons.

But Utopian has even more trouble with his daughter.

Although she has powers, Chloe rejects her parents' superhero life.

Model and influencer, she prefers photo shoots to fights in costume and abuses alcohol and drugs.

Source of conflict with his family, his will to live his life is totally unthinkable in the eyes of his father.

While he accuses her of being "selfish" in not using her powers to do good, she accuses him of placing a burden on her shoulders that she never wanted.

A cast without stars but in tune

This is where the title of the series comes into its own:

Throughout the episodes, an interesting reflection develops on the pressure weighing on generations Y and Z, those who have grown from crisis to crisis.

Do you have to be as good or even better than your father or mother?

And again, the reflection is more subtle than expected for this kind of series.

Brandon and Chloé, far from being stuck in sterile archetypes, prove to be complex and above all shifting.

On this point, the series is close to

, another story of iconoclastic superheroes.

and the classic superhero series,

takes on a surprisingly slow pace, punctuated here and there with regrettably a little too predictable twists.

Talkative, she gives pride of place to nuance and to characters who have the merit of breaking out of the shackles of the genre.

The more so as the casting, far from being luxurious with Josh Duhamel in "head of poster", flows perfectly in the gallery of heroes.

Special mention to Ben Daniels, perfect in the ambiguous role of Walter / Brainwave.

The series is good, the comics are better!

If the series can be watched, we can only advise you too much to double the viewing by reading the comics.

The paper version of

is a little bomb, very short, with ten chapters divided into two volumes (published in France by Panini Comics).

The screenplay is written by Mark Millar, one of the greatest comic book writers of the 21st century.

We owe him in particular

, all adapted to the cinema.

His writing, dense and punchy, contrasts with the many detours taken by the series.

The advantage of comics is accentuated by the existence of a third volume,

. It is a prequel, which tells the golden age of Union superheroes, in the years 1950-60, a period that serves as a reference for the actions of the characters in the base series. Except that this complementary story completely reshuffles the cards and changes the perception of the heroes that we have when reading

Without saying too much, she tints their supposed virtue with a good dose of hypocrisy. The ultimate twist of a brilliant work.