Netizens set an alarm clock in the middle of the night to grab tickets, and it's hard to get a ticket for the museum during the May Day holiday!

Chinanews.com client, Beijing, April 28 (Reporter Shangguanyun) Checking the strategy, setting the alarm clock, staying up late to check the phone...Who would have thought that one day they would "grab tickets" for a museum visit?   As the May Day holiday approached, many people began to plan their holiday life, rest at home, and go outing... Some people only discovered when making an appointme 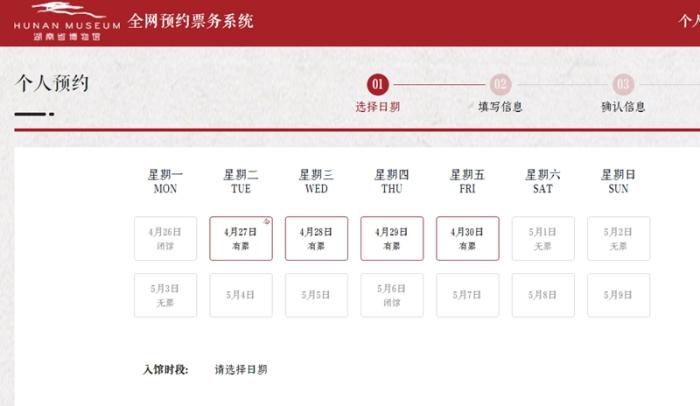 Chinanews.com client, Beijing, April 28 (Reporter Shangguanyun) Checking the strategy, setting the alarm clock, staying up late to check the phone...Who would have thought that one day they would "grab tickets" for a museum visit?

As the May Day holiday approached, many people began to plan their holiday life, rest at home, and go outing... Some people only discovered when making an appointment that the seemingly unpopular museum is already "hard to get a ticket." Topics such as "tickets" have also appeared in hot searches.

Why are these museums so popular?

"I once grabbed tickets for concerts, musicals, and the Palace Museum, but now I lost to the Hunan Provincial Expo."

Early in the morning on the 27th, a message quickly swept the screen, "The reservation for May 1st tickets for Hunan Provincial Museum is urgent."

According to reports, the Hunan Provincial Museum issued an announcement on the 26th that it will be open as usual during the May Day holiday, with a daily limit of 9,000 people, but "ticket grabbing" has become a problem.

The reporter logged on the official website of the Hunan Provincial Museum and found that the current tickets for May 1st to 3rd showed "no tickets" and the appointments were full.

Visitors can log in to the official website of Hunan Provincial Museum and WeChat official account to make appointments by time period seven days in advance (including the day).

Many netizens share their own experiences of robbing tickets with difficulty, but "can't ask for them". For example, they set an alarm clock at 1 o’clock to grab the tickets, swiped it until they fell asleep and didn’t swipe them in. They woke up at 3 o’clock and the tickets were gone. People lamented, "I have made a few appointments and never succeeded."

Some netizens even reported that the official website of the Hunan Provincial Museum collapsed because of too many people grabbing tickets; some netizens did not hesitate to "squat in the early morning" in order to successfully grab tickets.

Some netizens who grabbed tickets also lamented that it was not easy to make an appointment. “It’s finally late in the night. I kept scrolling on the balcony and saw the lights of other houses in the community. I felt that I was grabbing tickets for Hunan Expo.”

Check the strategy, set the alarm clock... Thousands of words can be combined into one sentence, "I didn't expect to go to the museum regularly and speed up the internet!"

If you want to check in to the museum, you have to work hard

In fact, this year's netizens are still careless.

It is not just the Hunan Provincial Museum that needs to work hard to grab tickets.

For example, during peak tourist seasons, the Palace Museum is often lamented that "it is hard to find a ticket", and this is also the case during the May Day holiday.

On the 27th, the reporter logged on to the official website of the Palace Museum and found that the tickets from the day to May 5 showed "sold out".

Image source: Screenshot of the official website of the Palace Museum

The ticket purchase instructions on the official website of the Palace Museum also mentioned that tickets will be pre-sold at 0:00 10 days in advance and will last until sold out.

The Palace Museum implements a real-name system for ticket purchases, and all audiences need to enter their identity information before booking.

In addition, each valid certificate is limited to one ticket per admission day.

In addition, the reporter logged on the ticket reservation service page of the official website of the National Museum of China and found that the museum was "full of appointments" from May 1 to May 4.

Because of its rich cultural heritage, the Shaanxi History Museum "out of the circle" also needs to "grab tickets."

The "Warm Reminders for May Day Visits to the Shaanxi History Museum" previously announced by it showed that there will be a limit of 9,000 visitors per day during the opening period.

The reporter found that as of the time of writing, the ticket reservations for the Shaanxi History Museum from May 1 to May 6 all showed "full".

After sorting out, the popular Sanxingdui Museum has also issued relevant announcements in advance: From April 25, 2021, the total number of visitors throughout the day will be controlled and real-name ticket purchases online in advance. Visitors need to wait five times in advance on the official WeChat account of Sanxingdui Museum. Purchase ordinary tickets and student tickets for museum admission on a designated platform with real names.

Behind the "ticket grab" is the love of traditional culture

It is worth noting that some media have exposed that all the tickets for the Forbidden City during the May Day holiday have been sold out, and the scalpers who reselled high-priced tickets have returned to the world. On some online trading platforms, some invitations marked to enter the Forbidden City on any date are on sale. .

The act of buying tickets through "scalpers" is not desirable.

But over the years, during holidays or peak tourist seasons, netizens’ growing enthusiasm for “visiting museums” is worthy of attention.

From the "C-bit debut" of the cultural and creative works of the Forbidden City in the early years, to the popularity of various museums and cultural relics joint ventures, many young people fell in love with the related "national tide culture".

New Year's Eve in the museum has gradually become a New Year custom for many people.

Data map: On the first day of the first month of the lunar calendar on February 5, 2019, the Palace Museum in Beijing was crowded, and a large number of citizens entered the palace for the New Year.

Nowadays, the phenomenon of "it is hard to find a ticket" in popular museums during the holidays precisely reflects people's pursuit of spiritual culture and their love for traditional culture.

It is not accidental that a batch of cultural relics hidden in the museum suddenly "fire".

The museum is a comprehensive space for people to learn about history and culture.

Facing the hot phenomenon of "a ticket is hard to find", for museums, what needs to be considered is how to provide better services, revitalize the cultural resources in the museum, and bring a full sense of participation and interaction to the audience.

Are you planning to go to the museum during the May Day holiday?