Her Highness Sheikha Latifa bint Mohammed bin Rashid Al Maktoum, President of the Culture and Arts Authority in Dubai (Dubai Culture), said, "The story of Dubai and humanity is a story of endless march, commitment, love and giving, and a beautiful example of philanthropy and support for the needy everywhere and from all spectrums." Her Highness added in a tweet 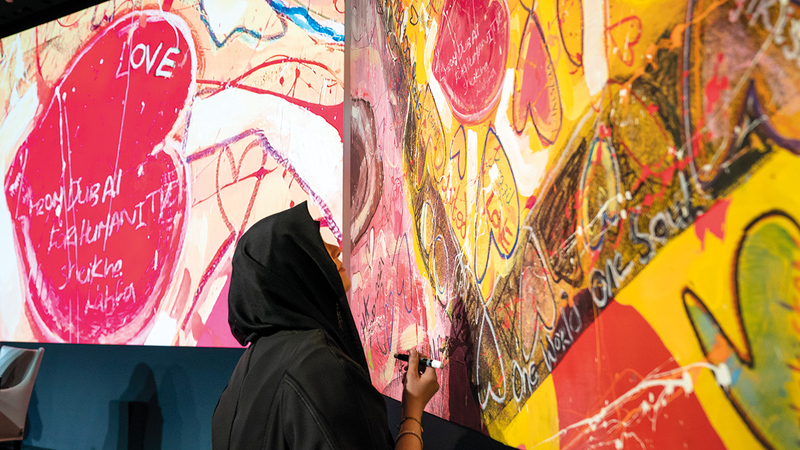 Her Highness Sheikha Latifa bint Mohammed bin Rashid Al Maktoum, President of the Culture and Arts Authority in Dubai (Dubai Culture), said, "The story of Dubai and humanity is a story of endless march, commitment, love and giving, and a beautiful example of philanthropy and support for the needy everywhere and from all spectrums."

Her Highness added in a tweet on her Twitter account yesterday, that “what Dubai achieved yesterday is a noble humanitarian achievement that reaped 36.6 million dirhams in the global artistic auction, organized by the Mohammed bin Rashid Al Maktoum Global Initiatives.”

Her Highness added in another tweet that “the auction supports the 100 million meals campaign, which is the largest humanitarian campaign in the region to feed the needy in 30 countries on four continents during the holy month of Ramadan.

I congratulate all those who participated in this humanitarian event, whether by offering or purchasing works of art.

And it was an exceptional Ramadan evening, which combines touches of art and the values ​​of giving, that Dubai witnessed, the night before last, during the global art auction, organized by "Mohammed bin Rashid Al Maktoum Global Initiatives", in cooperation with "Mobi International Auctions." The auction, whose proceeds go to support the 100 million meals campaign, the largest campaign in the region to feed food in 30 countries in four continents during the holy month of Ramadan, succeeded in achieving 36 million and 673 thousand dirhams, which is the total price of the works achieved by the auction exhibits, which collected between the paintings By prestigious artists and personal collectibles by world leaders.The charity art auction was a qualitative addition to the efforts of Mohammed bin Rashid Al Maktoum's global initiatives in expanding the circle of charitable and humanitarian work, which opens the door to contributions for everyone from various economic, social or cultural circles and from all over the world, embodying the values ​​of human solidarity, which the UAE has established a sustainable approach. Her various humanitarian and relief initiatives.

'The Journey of Humanity'

The charity art auction, which was held at the Mandarin Oriental Hotel, the day before yesterday, was attended by Her Highness Sheikha Latifa bint Mohammed bin Rashid Al Maktoum, Chair of the Culture and Arts Authority in Dubai (Dubai Culture), and Omar bin Sultan Al Olama, Minister of State for Artificial Intelligence and Economy. International celebrities and artists, such as the artist Sasha Jefri, owner of the "Journey of Humanity" painting, the largest in the world, participated in the charity auction of 100 million meals and remote work applications.

The artist Sasha participated in a live performance on the stage.

During the charity auction, he invited both tennis player and coach Boris Becker, Marjorie Harvey, wife of international presenter Steve Harvey and his partner in many charitable works, and British boxer Amir Khan, to place their respective palm signs on the board "New Hope: Praying for a Child."

The charity art auction displayed an oil painting on canvas by artist Sasha Jefri, with dimensions of five meters by two and a half meters, which he had completed earlier, and formed the road map for his larger painting "The Journey of Humanity" that he accomplished in Dubai.

Her Highness Sheikha Latifa bint Mohammed bin Rashid Al Maktoum signed the "Road to the Journey of Humanity" painting by Sasha Jefri for the charity auction.

The grandson of the Spanish artist Pablo Picasso, Florian Picasso, put his handprint on the painting during the auction.

An opportunity for collectors

She added that within 10 days, the target number for the 100 million meals campaign has been reached, but the campaign continues to reach greater numbers of beneficiaries.

Sarah Al-Nuaimi pointed out that the auction included rare artworks and personal collections of world leaders, which were presented exclusively, and for the first time for art lovers to acquire them, as the auction was organized in cooperation with specialized agencies.

She noted that choosing art as a way to do good goes back to the main goal, which is to reach a group of people who love charitable work.

She emphasized that art carries an important role in human affairs, praising the experience of the British artist Sasha Jefri, who previously presented a charitable work that carries a sublime message in the art that he presents, which is the unification of humanity, and how one can be effective in this regard.

The artworks attracted many attendees and collectors, among them Sima Fad, founder of Aparel Group, who bought a work entitled "Madonna with the Man and the Boy", by Salvador Dali.

She revealed that she chose this painting because she loves Dali's work, in addition to her interest in the purpose of the auction, as charity work mixed with art is the most important.

She added that it is the first time that she buys artworks from the UAE, but it is not the first time that she is bought from an art auction for a charitable purpose, as she sees it as an opportunity to realize dreams through art, considering that creativity carries the characteristic of merging and coexisting cultures, despite their differences and divergences between them. Oftentimes, buying a work by an artist from a different culture enriches one's imagination.

For his part, Vikram Sharaf, who bought the work of Nelson Mandela, said that it is not the first work that he acquires, as he has collected more than one work for prominent names, indicating that he will put the work in the house he is working on building on Palm Jumeirah in Dubai.

He noted that it is not the first time that he has acquired a work of art for charitable work, praising Dubai's role in the field of humanitarian work.

Sharaf described art as a distinctive and economically effective medium, and in the charitable field in particular, pointing out that the British artist Sasha Jefri worked in a distinctive way to devote art to doing good.

As for the beauty expert, Mona Kattan, who attended the event and bought an art piece, she said that it is not the first time that she has attended a charity auction.

"It is nice for a person to donate for humanitarian goals, and buy work of value," she said.

Mona Kattan chose the medal for Pablo Picasso, considering that it is one of the distinctive pieces that she can give to her children in the future, as it is of very high value, stressing that art can contribute to changing societies in all respects.

• Latifa Bint Mohammed signs the painting "The Road to the Journey of Humanity" by Sasha Jefri, in support of the charity auction.

• A qualitative addition to the efforts of Mohammed bin Rashid Al Maktoum Global Initiatives in expanding the charitable work circle.

• During the auction, rare 23 karat gold medals by Pablo Picasso were sold.

• Henry Moore's work "The Mother Carrying Her Baby" was the last auction item to be auctioned off.

• The auction proceeds to support the 100 Million Meals Campaign, the region's largest campaign to feed food in 30 countries on 4 continents, during Ramadan.