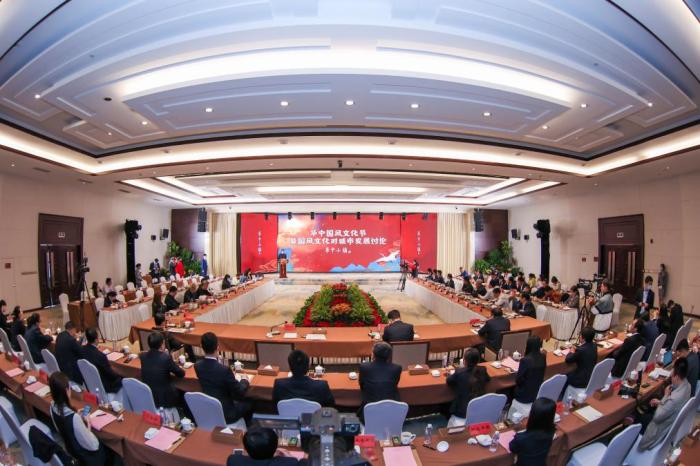 Chinanews.com, Beijing, April 25. At present, the promotion of traditional national style culture is in a boom. In response to the country’s call for traditional cultural industries, and to meet the people’s new expectations for traditional culture, Baoding City has integrated traditional national style culture with cultural tourism. Projects are integrated, and a forum with the theme of "The First National Culture Festival and Discussion on National Culture and Urban Development" was held on April 24. Well-known cultural communicators from all walks of life actively made suggestions and suggestions, and jointly explored the inheritance and inheritance of Chinese excellent traditional culture. Road to development.

Zhang Yiwu, a professor at Peking University, director of the Cultural Resources Research Center of Peking University, and a member of the National Committee of the Chinese People's Political Consultative Conference, pointed out that nowadays, the country's economic situation is improving and the spiritual needs of the people are gradually increasing.

How to cultivate new shoots on China's heavy cultural soil is an important topic that needs to be considered at present.

In response to this, the guests at the meeting gave suggestions from different professional perspectives.

Wang Gan, a well-known writer and winner of the Lu Xun Literature Prize, pointed out that from the "National Style" in the "Book of Songs" to the "National Style Forum", it is a new way of doing research around the construction of socialist culture with Chinese characteristics in all aspects, and it is the establishment of a "cultural culture". The exploration of the concept of "China" preserves the Chinese cultural heritage, and establishes a group of key cities that carry the mission of Chinese historical and cultural heritage, represented by Baoding, as the creative place, training place, and dissemination place of the entire country; former professor of Beijing Normal University , Doctoral tutor Li Zhitian suggested that the display of national style culture should not be separated from Chinese characteristics. It should be extended and innovated on the basis of protecting the peak level of Chinese culture. Taking "The Book of Songs" as an example, create the original singing version, youth singing version and Different versions, such as the Youth Deduction Edition, are disseminated to the whole country and the world.

Chen Jun, a former national first-level actor of the Chinese People’s Liberation Army Military Band and vice-chairman of the Erhu Association of the Chinese Music Association, went from creating a landmark of national music to gathering young people in the national style to think. In theaters or performance venues, the inheritance of folk music is inseparable from the "field", and the landmark folk music "field" is bound to attract more traditional culture lovers; Zhao Cong, head of the Central Chinese Orchestra and chief pipa player, learned from his own performance experience To set out, analyze the integration strategy of folk music and modern elements, and express the new fashion of Chinese art output in a simple and simple way; Zhu Zhizhong, senior editor of China Central Radio and Television and director of the Folk Music Art Professional Committee of the Chinese Folk Artists Association, proposed that Baoding is located Take the North China region as an example. The region has native music that grows naturally. It should make full use of the regional music civilization and hold corresponding national style music festivals or national style music festivals to spread music throughout the world as a "language".

At the forum, several guests who have made great achievements in the spread of national style also conducted an in-depth analysis of the contemporary expression of traditional culture.

Li Yugang, a national first-class actor and winner of the Guofeng Art Lifetime Achievement Award, described his mental journey from creating two-voice music works to Guofeng stage plays, determined to lead by example to train more young people to join the ranks of traditional culture; actor, Etiquette guide and professor of the Chinese Academy of Art Zhang Xiaolong shared his experience in the etiquette guidance of film and television dramas, and did a good job of etiquette guidance in popular film and television dramas to help young people maintain a rigorous attitude towards history at all times.

The dissemination of national style culture should seek a form that conforms to what the people like to hear and see.

Participants pointed out that music, as a universal language in the world, naturally has the advantage of spreading national customs and culture.

my country has a long history. The classics of folk music are shining like galaxies, and national style music and adaptations are widely broadcast on the Internet and spread widely. They are loved by young people. The participation of experts and scholars can add luster to them. The forms of music dissemination are diverse. For example, music festivals, concerts, musicals, etc., it is easier to create memory points, thereby helping national style music and national style culture to spread across the country and the world.