Shemagh ... an unwritten signature of the young Gulf man

The Emirati “kandora”, or men's dress, can be considered one of the most important pieces of the main daily clothing that has not changed much for hundreds of years, and despite its different styles and designs, it remains alongside its companion the head covering (the shemagh), one of the most important symbols of the Gulf man’s appearance in general. To turn out brother 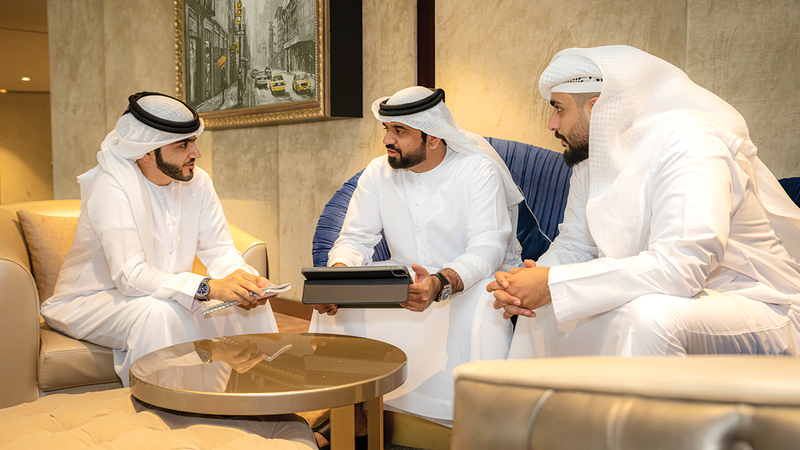 3 young Emiratis launched a modern brand for him

Shemagh ... an unwritten signature of the young Gulf man

The founders of the project: The idea has been under study for 6 months.

The Emirati “kandora”, or men's dress, can be considered one of the most important pieces of the main daily clothing that has not changed much for hundreds of years, and despite its different styles and designs, it remains alongside its companion the head covering (the shemagh), one of the most important symbols of the Gulf man’s appearance in general. In particular, the latter turned into a project that three young Emiratis had jointly launched.

Ahmed Al-Hashemi, Khaled Belhoul, and Mishaal Al-Marzouki brought them together with school seats and years of friendship, as well as the idea of ​​transforming this basic product in the life of any Emirati man into the main focus of their project, in addition to their passion for highlighting the popular male heritage in a different modern way, commensurate with its place within the traditions of societies Region at the same time.

The co-founder of Signature Yashmagh Ahmed Al Hashemi told Emirates Today that he has always found that the concept of wearing Gulf clothes is wrong for the West, explaining, “This is what we always see in foreign films, as they often wear them in a funny way and far from reality. , Which is also what we notice on tourists and members of other communities ».

He added that although the idea of ​​the project "targets Emirati youth in particular, it also focuses on correcting the idea and the true form of the way to wear the shemagh, for all those interested in knowing our culture, and wearing the Emirati dress the correct way."

Al-Hashemi affirmed that the idea of ​​the project that they studied for more than six months, which was launched in May 2019, “was inspired by our observations regarding the way tourists wear the Emirati dress, with a poor quality shemagh that does not match the clothes of the people of the region, which reflects their love and desire for an integrated Emirati experience And their admiration for the Emirati culture, but not wearing the appropriate shemagh limits the integrated appearance of the Emirati dress, and constitutes a challenge for us to market our civilization in its ideal form to all those interested in it, from here we launched the idea of ​​our project, which is concerned with providing the Emirati white shemagh and its accessories.

He indicated that the challenge that he and his partners faced in the project was to change the stereotype of the shemagh and ghutra from ordinary traditional wear to a modern and modern piece that has its own value and mark, pointing out that their ghutra is distinguished by its white color that matches the various degrees of traditional dress, “It is also made of the finest quality. Cotton types have unique classic patterns, and are distinguished by their light weight, stability on the head, and an appropriate price that makes them accessible to everyone. Our goal is to market the Emirati shemagh in all its details, which is known for its white color and distinguishes it from the rest of the Arab or Gulf fashion.

Like most of the wise Emirati projects, the project was launched in 2019 on digital platforms, as the three partners launched their store on Instagram first, and then the website “to spread the brand among young people, and multiply requests, in a way that helped us open our store on the second floor in The Dubai Mall. Within two years only, with the support and quantity of clients, and with the support of the Federal Youth Foundation.

Despite the Corona pandemic, which had a strong impact on the local and global market, especially during the periods of the national sterilization program, the situation was different for “Signature Yashmagh”, as Al-Hashemi considered that their digital breakthrough helped them to have a “strong infrastructure that depends on customer demands.” Electronic and delivery service, in addition to the content of what we offer from Shemagh and its accessories, all of them are consumer products, meaning that their consumption is almost daily, not limited to a specific time, period or occasion, and the customer needs them continuously.

He noted that the brand name comes from the idea of ​​"signature", considering that the shemagh itself "is the signature of the young Gulf man who highlights his identity, which we call the unwritten, but tangible signature."

For his part, the founding partner in the project, Mishaal Al-Marzouqi, said: “Introducing the national costume means introducing our identity, our customs and traditions, and the authenticity of our people… through which we know all who traveled on the land of the Emirates with the heritage of our country, and the heritage of our fathers and grandfathers. And pride and a prominent presence in all different forums, and we also see and seek the keenness of many tourists to wear it or buy it as symbolic gifts for their loved ones in their countries, and we want tourists coming to the Emirates to return with a real, authentic Emirati piece. ”

The founding partner of the project, Khaled Belhoul, listed a number of products offered by the brand in addition to the shemagh, which is "the spray for the shemagh, which contains in its formula pure musk mixed with the scent of Italian men's leather, with diluted jasmine petals and peach juice, which is stable and lasts for 24 hours."

He added, "We also have the mixture that matches its ingredients with all seasons, and it is of Spanish origin. Its composition includes cedar wood, pure musk, and pure sandalwood mixed with a unique quality of pure Cambodian oud."

"We have a (Signature Yashmag) box, whose contents differ according to the occasion and season. Through it, we offer gift options that allow customers to celebrate their loved ones and present new ones to them through this box and its contents arranged in an elegant and modern way,” Belhoul added.

Ahmed Al-Hashemi said that they focused in their project on presenting the Emirati shemagh in its white color and in a classic way without additives that might distort the main idea of ​​it. ».

"We seek to define the correct way to wear the shemagh for all those interested in knowing our culture."

"Defining the national dress means defining our identity, our customs and traditions, and the authenticity of our people."

"The project did not stop at the limit of shemagh, but rather worked to provide a number of products offered by the brand."

• The national dress is a subject of pride and pride, and a prominent presence in all different forums.

• Changing the stereotype of Ghutra from an ordinary traditional wear to a modern piece.