Production capacity has expanded, and "rice bowls" have increased: Why does "net celebrity" prefer small cities in Northeast China

Xinhua All Media+|Northeast Revitalization City Tour|Why does "net celebrity" prefer small cities in Northeast China?   One is a land near the sea, and the other is a small border town. The northeastern cities of Yingkou and Suifenhe, which are more than 800 kilometers away in a straight line, rely on geographical characteristics and comparative advantages to make Internet celebrities "red" into 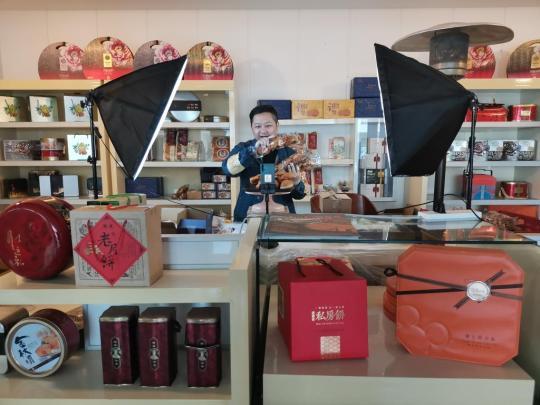 One is a land near the sea, and the other is a small border town. The northeastern cities of Yingkou and Suifenhe, which are more than 800 kilometers away in a straight line, rely on geographical characteristics and comparative advantages to make Internet celebrities "red" into productivity, and also to realize the development of traffic. "Reservation" has become a new engine to stimulate local economic development.

"Freshly baked cannabis flowers, ready to be shipped, the old iron is fast!" Walked into Yingkou Shengshi Industrial Co., Ltd., located in the Liaohe Food Industrial Park, Laobian, an internet celebrity town in Yingkou, and brought the goods in a live broadcast. In progress.

In the production workshop of Shengshi Industrial, workers lined up on the workbench, kneading, kneading, and unscrewing, and the twist billets quickly formed.

"In the past, offline stores could only sell hundreds of twists a day. Since the fast train of e-commerce live broadcasts, the company now produces 100,000 twists per day, and its production capacity is almost at its limit. More than 200 people work 20 hours a day to twist twists. Many anchors If you want to bring goods to our home, you have to arrange the number." Zhang Hexin, the company's chief operating manager of e-commerce, said with a smile, "We have been doing food baking for 30 years, and we never thought it would be so prosperous!"

Similarly, the e-commerce live broadcast of another company "Niang Niang Jia" is also very busy: four or five anchors enthusiastically introduced the goods on the shelves behind them in front of their mobile phone screens, and more than ten workers next door skillfully packaged the goods according to the order. classification.

Anchor Fang Xue told reporters that nowadays, there are many anchors on the base carrying goods live every day, and more than 30,000 express orders are sent every day, with daily sales of nearly 800,000 yuan.

The prosperity of enterprises stems from the local Internet celebrity economy.

In 2019, the old border district of Yingkou City was led by the government and relied on market-oriented professional forces to deploy "Internet celebrity towns", and encouraged and supported the Internet industry such as live broadcast and delivery. The Internet celebrity economic ecosystem created by them found a breakthrough for enterprises to recover and transform.

Zheng Youhe, a local century-old store, relied on e-commerce live broadcasts to move from a coastal city to the whole country. In 2020, the annual sales will reach 120 million yuan, a year-on-year increase of 30%.

On June 2, 2020, the web anchor of a company in the Social E-commerce Industrial Park of the Laobian District, Yingkou City, Liaoning Province, was selling goods live.

The production capacity has been expanded and the "rice bowls" have increased.

The rise of live delivery of goods has also promoted the supporting and agglomeration of upstream and downstream industries such as express delivery, logistics, and tape, and has promoted a significant drop in logistics costs. It has a comparative advantage across the country.

At present, the old border area has attracted more than 300 high-quality companies, with 150,000 network anchors, and a huge fan base of over 350 million people. The traffic and market have further attracted more and more physical production companies to come to investigate investment matters.

The opportunities brought by live broadcast e-commerce have allowed those northeastern cities with discerning eyes to seize the "outreach" to leapfrog the market.

Song Zehua, secretary of the old border district committee, said: "Northeast people have their own sense of humor, and their speech is easy to understand and not stage fright. This is the comparative advantage of Northeast people. We give full play to the ability and quantity advantages of the Northeast anchors to better develop the Internet. Red economy."

On June 2, 2020, employees of a company in the Social E-commerce Industrial Park in Laobian District, Yingkou City, Liaoning Province, are sorting goods.

Through e-commerce methods such as live broadcast and delivery, foreign drinks and snack foods are sold from here to all parts of the country, directly and indirectly driving more than 25,000 jobs.

Nina, a Russian who has been rooted in China for many years, is one of them.

Live streaming, ordering, express delivery... In the northeast of April, the weather gradually warmed up, and Nina's work was as busy as usual. She had live broadcast sales on e-commerce platforms almost every day, mainly selling Russian food.

Nina said that in recent years, Russian food has been selling better and better, and many customers are "repeat customers."

Relying on the Mandarin and high-quality products that are full of northeastern flavor, Nina has accumulated many fans.

Nowadays, the life of this Russian girl is full of Chinese elements-eating hot pot, speaking Chinese, and sometimes making Chinese delicacies by herself.

In recent years, as the trade between China and Russia has become closer and closer, many Russians have chosen to work and live in Suifenhe City. The local area also provides foreigners with services such as housing subsidies and intellectual property protection, allowing them to engage in food processing and cross-border trade. Russians in e-commerce and other industries have become "star internet celebrities" here.