Does Leng Gong really exist? Is Jingshan related to Feng Shui of the Forbidden City? The truth is...

Chinanews client, Beijing, April 21 (Reporter Shangguanyun) From "Zhen Huan Biography" to "Yanxi Palace Strategy", the residence of the imperial concubine in the palace once became a hot topic. Someone even went to the Yanxi Palace of the Forbidden City to check in, hoping to see what the place where Wei Yingluo lived.   In the recently published book "Six Hundred Years of Construction of the F 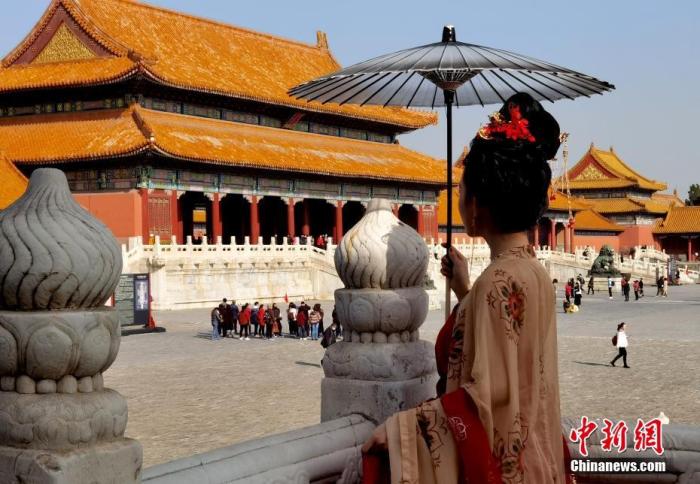 Chinanews client, Beijing, April 21 (Reporter Shangguanyun) From "Zhen Huan Biography" to "Yanxi Palace Strategy", the residence of the imperial concubine in the palace once became a hot topic.

Someone even went to the Yanxi Palace of the Forbidden City to check in, hoping to see what the place where Wei Yingluo lived.

In the recently published book "Six Hundred Years of Construction of the Forbidden City", Jin Hongkui, the author of the book and a research librarian of the Palace Museum, also mentioned the issue of the "Queen's Palace".

He also mentioned that "Leng Gong" does not specifically refer to any palace, and the place where the Queen Mother lives is not static.

Construction of the Forbidden City

The construction of the Forbidden City has a lot to do with Emperor Yongle.

He decided to move his capital to Beijing, and a mighty construction project began.

In Jin Hongkui's view, Emperor Yongle's construction of Beijing city was actually an "old city reconstruction" of Yuan Dadu, including the construction of the imperial city and the continuous development of the natural environment.

He said that the palace city of the Yuan Dynasty is called Ouchi, and it is probably just north of where the Forbidden City is now. It has a clear central axis.

During the Yongle period, the palace was rebuilt and moved to the south from the Yuanta. The main entrance was the Meridian Gate, and the first three halls and the back two palaces were built.

On both sides of the central axis, Wenhua, Wuying Hall and the Sixth Palace of East and West are arranged symmetrically.

The Longevity Mountain was piled outside the north gate of Miyagi, so that the central axis of the Yuan Dynasty was continued, the amplitude of the ups and downs was increased, and the content was richer.

The construction of the Forbidden City consumed a huge amount of manpower, material resources and financial resources.

For a simple example, there are two major systems of brick kilns: Linqing kiln and Suzhou kiln, which are distributed in the Zhili area in the north and south of Beijing and on both sides of the canal in Shandong and Henan to make city bricks and gold bricks respectively.

“Today’s black kiln factory in Beijing was responsible for the production of black tiles, while the Liuli Factory was responsible for the production of glazed tiles with higher technical content.” Jin Hongkui discovered from the literature that the original construction of the Forbidden City was a huge and systematic project that required many parties. Collaboration can be completed.

It took more than ten years to finally complete the Ming Dynasty palace.

Jin Hongkui said, but at that time it was not called the Forbidden City. "It wasn't until the Wanli Emperor that the name'Forbidden City' was written into the "Da Ming Huidian."

"In the Yongle period, the layout of the imperial palace was basically established. Later, during the Jiajing period, there were some transformations." Jin Hongkui said that some palaces were on fire and rebuilt in the imperial palace. During the Qianlong period of the Qing Dynasty, there were some reconstructions and additions, but the overall layout did not Fundamentally changed.

From the perspective of architectural art, the basic layout unit of Chinese ancient buildings is the "courtyard", from ordinary residences to official residences to imperial palaces, the same is true for buildings of different natures and levels.

"Taking the Ming Dynasty as an example, the imperial palace can be roughly divided into the defense system, the outer court, and the inner court. The defense system includes the moat, the city wall and its towers and turrets. The outer court roughly includes the Meridian Gate, the three major halls and other areas." Jin Hongkui introduced, Inner court buildings such as Qianqing Palace, Jiaotai Palace and Kunning Palace were not only the palaces of the emperors and queens, but also the halls for internal family gatherings.

The emperor's concubines and princes live scattered in the Sixth Palace and the Five Eastern and Western Palaces on both sides of the central axis.

As the emperor’s inner court secretary and service agency, the inner government office was also arranged near the inner court.

"Some ceremonial activities were held in the three halls. The Ming dynasty hearing ceremonies were held at Fengtianmen (that is, Taihemen), and the office was often in the Bindian. The Qing emperor listened to politics at Qianqingmen and was closer to the inner court. Offices began during the Yongzheng period. It's in the Hall of Nourishing the Heart." He said.

"There is no clear record in the literature whether Emperor Yongle piled up Jingshan. But when the Forbidden City was completed, it was mentioned in the tribute article presented by the minister: Fushan stood after the mountain, showing the clouds and smoke, in fact, the main star, and the longevity of life. So it can be. It is speculated that it was born at the same time as the imperial palace of the Ming Dynasty, and its feng shui significance was clearly stated," he said.

Jin Hongkui believes that the statement that "Jingshan is piled up of briquettes" is purely legendary. "In the Ming Dynasty imperial palaces, charcoal was not used for heating in winter. This statement is not reliable."

Where does the queen mother live?

Thanks to popular TV dramas, in recent years, the residence of the concubines in the Forbidden City has been very lively for a while.

Jin Hongkui said that in the imperial palace, the "Queen Dowager" represents not only the descent, but also the "Orthodox", and the Queen Mother may not be the emperor's biological mother.

Data map: Previously, the "National Color and Heavenly Fragrance-Peony Appreciation in the Forbidden City" Forbidden City Heze Peony Exhibition was held in the Ci Ning Palace Garden of the Palace Museum in Beijing.

"Like the Jiajing period, there were actually two queen dowagers at the same time, and two dowager palaces were needed. The layout of the palace must not only meet the needs of etiquette, but also meet the actual needs of functions. After some transformation, Ciqing Palace and Cining Palace appeared. Palace." He mentioned.

The situation in the Qing Dynasty was not that complicated. Ci Ning Palace was where the Empress Dowager Xiaozhuang lived.

After her death, Cining Palace was uninhabited for a long time.

In some film and television dramas in ancient costumes, there are often bridges where the concubine is "pushed into the cold palace", but in a real palace, the "cold palace" does not specifically refer to a certain building.

"Lenggong does not specifically refer to a palace or an area in the palace. If the concubine makes a mistake and is demoted, the emperor will let her move to a place that he usually doesn't see. Anyway, it's just the corners that you can't see, and you can't see it. Not upset," he explained.

Maintenance of the Forbidden City

It has been 600 years since the completion of the Forbidden City.

Jin Hongkui believes that in the nearly 500 years that the Forbidden City has been a royal palace, annual maintenance and timely periodic repairs are the main technical means for the preservation of the Forbidden City.

Annual repair is a management system, and maintenance is the slightest repair to a building.

The main items of annual repairs recorded in the "Great Qing Huidian" include: weeding of the Forbidden City Wall, and weeding and thorns during the summer months and October.

Taogou in the Forbidden City, that is, the dredging of sewers and the inner Jinshui River, has never been interrupted year after year, protecting the safety of the foundations.

However, age repair cannot solve all problems. The defects of many hidden parts of ancient buildings cannot be discovered in time and will accumulate. Once discovered, more thorough repairs are required. Therefore, the repair of buildings often presents a certain stage.

In recent years, the Forbidden City has been better protected.

Jin Hongkui mentioned that the groundbreaking ceremony of Wuying Hall was held in October 2002, and the overhaul project began. Over the past 18 years, the problem of occupying the Forbidden City site has been greatly improved. The repaired buildings have eliminated hidden dangers and are basically open. The ancient buildings of the Forbidden City are protected. Enter a virtuous circle track.