Female car owners' "car roof rights protection" has become a hot spot, and who makes them "decent"? Female car owner's rights protection related video picture data network   On the morning of April 19th, on the first day of the 2021 Shanghai International Auto Show Media Day, a rights defender wore a T-shirt with the Tesla trademark and the words "Brake Failure" and stood on the roof of the Te 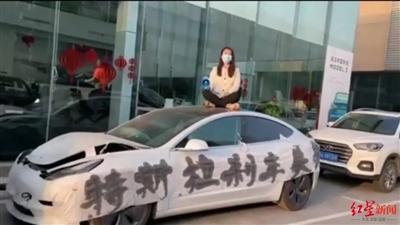 On the morning of April 19th, on the first day of the 2021 Shanghai International Auto Show Media Day, a rights defender wore a T-shirt with the Tesla trademark and the words "Brake Failure" and stood on the roof of the Tesla booth shouting "Special Slug brakes failed", causing onlookers.

In the afternoon of the same day, Tesla officially released Weibo, saying: “We learned that the person involved was the owner of the speeding violation that occurred in Anyang, Henan in February.” According to local media reports, in response to Tesla’s rights protection incident at the Shanghai Auto Show, Shanghai The police have been involved in the investigation.

In addition, Tao Lin, vice president of Tesla, said in response to this matter: "We have no way to compromise, it is a process that a new product development must go through."

Xinhua's hot review mentioned that there will inevitably be conflicts and disputes between car owners and car companies.

Standing on the roof of the car is neither safe nor decent, and it is even more useless to public order.

At around 11:30 on the 19th, the Chengdu Commercial Daily-Red Star News reporter learned at the Shanghai Auto Show that a female rights defender was wearing a T-shirt with the Tesla trademark and the words "Brake Failure" at the Tesla booth. , Standing on the roof of the car shouting "Tesla brake failure", aroused onlookers.

The reporter confirmed the news to the onlookers at the scene.

Another on-site audience said that the activist woman had been taken away by the staff, and the Tesla booth quickly returned to calm.

The reporter saw that in the customer room behind the Tesla booth, relevant staff were posting frosted glass films with shielding functions.

At 2:59 pm that day, Tesla officially released a Weibo response to the incident: “Regarding the irrational behavior of the car owner at the auto show site today, we understand that the person involved was the owner of the speeding violation that occurred in Anyang, Henan in February. "

Tesla also stated: “The owner of the car obtained credentials through an unconventional method to enter the exhibition hall, broadcast live around the booth, revealing a customized rights-defending T-shirt, and boarding the roof of the car to shout. After we noticed this behavior, we verbally persuaded him many times. , But the car owner did not stop irrational behavior. After consulting with the exhibition organizer, considering that this behavior seriously affects public order, the organizer coordinated with public security law enforcement officers to persuade the car owner to leave."

Tesla said that the owner of the car had been involved in a collision accident due to speeding violations and insisted on returning the car on the grounds of product quality.

"In the past two months, we have been actively negotiating with car owners, expressing our willingness to assist in the completion of repairs and insurance claims, while proposing a variety of solutions, but the owners strongly refused, and do not accept any form of third-party testing. In the future, we will still We will continue to communicate closely to help car owners resume their normal car life as soon as possible."

The reporter noticed that the owner of Anyang, Henan Province had repeatedly defended his rights, and the cause of the incident had to start with an accident that occurred in February this year.

On February 21, Ms. Zhang's father drove his Tesla Model 3 to take his family out.

According to Ms. Zhang’s memories, after driving for 5 or 6 minutes, she passed an intersection and saw a traffic light, so she let go of the accelerator, “I heard my father yelled'Brake failed'”, and the vehicle evaded for two consecutive times. The car rear-ended two cars, and finally hit the concrete barrier on the side of the road before stopping.

Regarding the cause of this accident, Ms. Zhang believed that there was a problem with the vehicle's braking system.

On March 10, Ms. Zhang blocked a Tesla store, and the video of standing on the roof of the car using a horn to defend rights was popular all over the Internet.

It is reported that after the above-mentioned accident, the traffic police of the Yindu Branch of the Anyang City Public Security Bureau issued a letter of responsibility for the traffic accident.

The certificate shows that the accident occurred at 6 pm on February 21 and the accident site was the village section of the 341 national highway.

On March 10, the relevant staff of Tesla's PR team in China responded to reporters that the driver involved was driving at a speed of 118.5km/h on a national highway with a maximum speed limit of 80km/h. During this process, ABS (Brake Prevention) Locking system) and brakes are working normally.

"The backstage shows that there is no problem with the braking of the vehicle during driving. The backstage data cannot be tampered with. If required by third-party inspection agencies and judicial agencies, these data can be retrieved from Tesla." For Tesla Ms. Zhang did not agree with the above statement: "We are not disagreeing with the identification of third-party testing agencies. The traditional identification methods of fuel vehicles and electric vehicles are different. We want to find an authoritative testing agency that is recognized by both parties."

Subsequently, Tesla’s official Weibo "Tesla Customer Support" released a Weibo stating that there were no abnormalities in the vehicle's braking system, and it is currently looking forward to obtaining the customer's consent for third-party testing.

In response to the car owner’s full responsibility for the accident, she was willing to assist Ms. Zhang in completing vehicle maintenance and insurance claims, but she was strongly rejected by Ms. Zhang.

Is it reasonable rights protection or a disguised car trouble?

The owner does not recognize the testing agency

After Tesla issued a statement on March 10, the dispute between Ms. Zhang and Tesla has never been resolved.

On April 11, at the entrance of the Dahe Auto Show in Zhengzhou, Henan Province, Ms. Zhang also showed the public her "brake failure" Tesla accident car.

After the auto show rights protection incident, many netizens sighed, “Why is it so difficult for Tesla owners to defend their rights?” Some netizens also questioned, “Is this a reasonable rights protection or a disguised car trouble?”

Tesla said in a statement on March 10: "Ms. Zhang once again blocked the accident car with the seal back into the Tesla store, and made it clear to Tesla staff that it would not accept any third-party test results. , And will not accept any mediation."

In response, Ms. Zhang explained in the Weibo post: "We do not disagree with third-party inspections, but we just hope to choose a professional and authoritative organization for identification."

According to Ms. Zhang: "At noon on March 9th, when the two parties conducted mediation at the Zhengzhou New Area Market Supervision Bureau, the supervisor in charge of the mediation told us that the only one that can do imported car inspection and appraisal is called the China Quality Certification Center. Public information shows that the center’s business includes 3C certification, management system certification, and 3C training. It has no business related to automotive technology appraisal. Obviously, it is not a professional appraisal agency. You can only choose this one. Not a reasonable mediation."

Regarding the qualifications of the appraisal agency, the two sides are deadlocked.

The reporter consulted the Beijing Zhongji Vehicle Judicial Appraisal Center on this, and the relevant staff said that the Tesla brake system can be tested, and it has also been tested.

However, personal business is currently not accepted, only agency entrustment is accepted.

The reporter found that since 2020, there have been more than 10 suspected brake failure incidents in Tesla cars.

In more than a year, such incidents occurred frequently across the country, including Jiangxi, Shanghai, Zhejiang, Sichuan, Beijing, Jiangsu, and Shenzhen.

On April 11, in a parking lot in Shanghai, the owner Mr. Liu said that the Tesla he was driving could not stop when turning in the garage until it hit the wall and forced to stop.

Tesla responded to the accident and stated that the ABS started to slide due to too low ground friction. The accident is still under further investigation.

The reporter tried to contact Ms. Zhang on the afternoon of the 19th. As of press time, no response was received.

Tesla crashed into a tree and caught fire in unmanned state, causing 2 deaths

According to the New York Times, on April 17, a Tesla in which two men were riding in Texas, USA, was involved in a car accident and caught fire. Two passengers in the car died.

It took 4 hours for firefighters to extinguish the fire completely with 30,000 gallons (about 110,000 liters) of water.

The police found that the vehicle was unmanned at the time of the incident.

The National Highway Traffic Safety Administration said that in March this year, 27 investigations into Tesla car collisions had been launched, of which at least 3 car accidents were recent.

According to Harris County Police, combining the evidence at the scene of the accident and witness testimony, the police believe that at the time of the accident, “no one was driving the accident vehicle” and the two passengers in the car were sitting in the front passenger seat and the other in the back row. .

The vehicle involved in the accident on April 17 was a 2019 Tesla Model S.

At around 11:25 p.m. local time, the car drove at a "high speed" to a turning section, suddenly rushed out of the road about 100 feet, hit a tree and caught fire.

Just minutes before the incident, two men, 59 and 69 years old, went out under the watch of their wives in the car.

At that time, the two said they wanted to drive out, and they were still talking about the autopilot function of the car.

The local police contacted Tesla on the day of the accident, seeking "some guidance," but refused to disclose the details of the communication.

Tesla has disbanded its public relations team and has not responded to media queries on this matter.

It is worth noting that on the same day, Tesla CEO Musk posted the company's recent safety report on social media, stating that "Tesla with autonomous driving is now 10 times less likely to have an accident than an ordinary car."

Tesla’s official website calls its autopilot function “the future of driving”, saying that its vehicle can “automatically control the steering wheel, acceleration and braking in its lane,” but it also warns that “the current autopilot function requires a driver. Do not allow the vehicle to drive automatically.” That is, the so-called “automatic driving” is actually a driving assistance system, not a vehicle that achieves fully automatic driving.

According to the Associated Press, the National Transportation Safety Board pointed out last year that the design of this system eliminates the need for drivers to focus on driving and does not restrict the use of autonomous driving functions.

In addition, the National Highway Traffic Safety Administration (NHTSA) said that in March this year, 27 investigations into Tesla collisions had been launched, of which at least 3 accidents were recent.