Director of the large-scale symphonic poem "Recollection of Tulou"   91-year-old "hardcore grandma" Zheng Xiaoying is on stage again   "You have the heart, I have love. Even if the mountains are high and deep, the mountains open the way, and the deep waters have bridge builders." On the evening of April 16, the large-scale symphonic poem "Echoes of Earth Buildings" was played at the National G 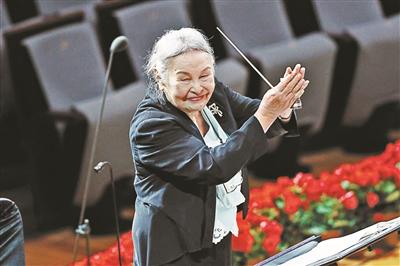 Director of the large-scale symphonic poem "Recollection of Tulou"

"You have the heart, I have love. Even if the mountains are high and deep, the mountains open the way, and the deep waters have bridge builders." On the evening of April 16, the large-scale symphonic poem "Echoes of Earth Buildings" was played at the National Grand Theater.

As the first female symphony conductor in New China, 91-year-old, silver-haired Zheng Xiaoying once again appeared on the stage and directed "Reminiscence of the Tulou".

The large-scale symphonic poem "Echoes of the Earth Building" composed by the famous composer Liu Yuan is a work based on Hakka history and culture. It consists of five movements and "Song of Hakka".

As a conductor from Yongding, Fujian, Zheng Xiaoying has always wanted to do something for her hometown.

"The motivation for this work was my visit to family and roots in 2000. The first time I saw the Tulou, my heart was very shocked. Inside the Tulou are very rich elements of Central Plains culture, whether it is wood carvings or stone carvings. It is the architectural art of Tulou, which makes me feel incredible."

Zheng Xiaoying recalled the origin of the creation of "Reminiscence of the Tulou" and said: "Someone told me that the 16th World Hakka Conference will be held in Longyan. I blurted out that if I could perform a Hakka performance at such a conference. A spiritual symphony should be great. So, my friends helped me find funding, and most importantly, they helped me find a very good composer, Liu Yuan." The composer Liu Yuan’s hometown is in Longyan, Fujian. The Hakka people are very familiar with their habits and life. Liu Yuan was very excited when he received a call from Zheng Xiaoying, and the two hit it off.

In the past 21 years, Zheng Xiaoying has spared no effort to promote this work engraved with the Chinese nation's stigma, bringing Hakka folk songs to many corners of the world.

So far, "Reminiscence of the Tulou" has completed 76 performances in 12 countries and regions, setting the highest number of performances of large-scale symphony works in China.

Nevertheless, Zheng Xiaoying believes that as a conductor and an orchestra, one should shoulder the responsibility of promoting Chinese works: "If a good work is found, the conductor should work hard to promote it, and have the sense of responsibility to promote the excellent symphony works of our motherland. this is what we are supposed to do."

Although there were a lot of hardships along the way, Zheng Xiaoying felt very relieved.

Regarding the inheritance and promotion of Chinese works, Zheng Xiaoying believes: "Performers are not creators, but second-time creations. If you have a good work, you have to support it regardless of remuneration and spare no effort. Music requires performance to make it audible. In order to impress people, otherwise the work will always be in the drawer. In an environment that does not understand the value of symphony, it is difficult to promote, but this is our responsibility and we should do it."