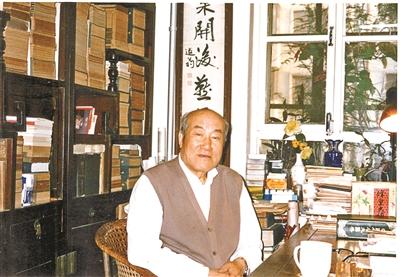 He "picked cultural relics" in the Forbidden City

The National Palace Publishing House has recently photocopied and published 19 volumes of "Liu Jiu'an Painting and Calligraphy Appraisal Research Notes". The notes of more than 3 million words truly restore the growth and scholarship of Mr. Liu Jiu'an, a research librarian of the Palace Museum, a contemporary famous Chinese ancient painting and calligraphy appraiser.

In April 1962, Mr. Liu Jiu'an, Mr. Zhang Heng, and Mr. Xie Zhiliu participated in the appraisal of paintings and calligraphy collected by the National Cultural Relics Agency organized by the State Administration of Cultural Heritage. They started from Beijing and passed through Tianjin, Harbin, Changchun, Shenyang, and Luda, crossing four provinces for half a year , Appraisal of 10,000 paintings and calligraphy, to establish a deep friendship in work and life.

In June 1983, with the approval of the Propaganda Department of the Central Committee of the Communist Party of China, the State Administration of Cultural Heritage re-established the "Chinese Ancient Painting and Calligraphy Appraisal Group" consisting of seven gentlemen Liu Jiu'an and Xie Zhiliu, Qi Gong, Xu Bangda, Xie Chensheng, Yang Renkai, and Fu Xinian. From 1983 to 1990 A total of 61,596 calligraphy and calligraphy works have been recorded for 8 years, and a comprehensive survey of ancient calligraphy and calligraphy preserved in mainland China was carried out.

After the appraisal, Mr. Liu Jiu'an and others jointly compiled a 24-volume "Ancient Chinese Painting and Calligraphy Catalogue", which condensed the painstaking efforts of the first-line appraisal experts of ancient Chinese painting and calligraphy, covering the existing ancient paintings and calligraphy works in domestic museums, and greatly surpassed the Song Dynasty and the Song Dynasty. The collection of classics in the Qing Dynasty has become an important reference material for the study of ancient Chinese paintings and calligraphy, as well as a database for reference by major museums and collectors. It can be called a "contemporary stone canal treasure".

Knowing the truth and discriminating the fake runs through the identification of Mr. Liu Jiu'an's calligraphy and painting. Taking Wu Yingmao's fake Zhu Yunming's book as an example, he concluded, "Zhu's calligraphy pen is mainly centered and side front is supplemented, and sometimes both center and side are used. Wu's calligraphy is more exposed and lightly pressed, in the form of embracing the flanks and taking beauty, it can be said to be more joyful and less calm than the Zhushu." From this, Mr. Liu Jiu'an distinguished a group of Zhu Yunming's original works, but actually Wu. Ying Mao's works, such as "Cursive Script Zui Weng Ting Ji Juan", "Cursive Script A Fang Gong Fu Juan" and so on.

In cleaning up and identifying the tens of thousands of rulers of Ming and Qing Dynasties in the Palace Museum, he found a large number of letters with important documentary value.

The documentary exhibition of Mr. Liu Jiu'an was launched simultaneously

On April 13, the "Document Exhibition in Memory of Mr. Liu Jiu'an" and the symposium of "Liu Jiu'an Painting and Calligraphy Appraisal Research Notes" was held in Jingxinzhai, Jushi Building, Dongcheng District, Beijing.

This event is hosted by the Palace Press.

The exhibition space uses the study tools used by Mr. Liu Jiu'an during his lifetime to try to restore the old furnishings of the study, and strive to vividly restore the life scene of Lao Liu. The exhibits include Lao Liu's bookcase, desk, chair and the plaque of Zhao Zhiqian of the Qing Dynasty that has been hanging in the study room. Original couplet with Ye Gongchuo.

The exhibition is based on "Liu Jiu'an Painting and Calligraphy Appraisal Research Notes", which selects more than 20 original sets of notes with considerable academic value, typical appraisal cases, and friends in the appraisal circle. The time span runs through Liu's life, including the true paintings and calligraphy. False identification, textual research and interpretation of Lin Zexu's handwritten notes, Dong Qichang's works inscriptions, "Comprehensive Catalogue of Chinese Painting" excerpts, records of cultural relic appraisal talent training seminars, records of paintings seen in the United States, notes of Ming and Qing dynasties collected by the Shanghai Museum, numbered notes of the handwritten notes of the Four Monks and the Eight Monsters Wait.

The exhibition also displays several calligraphy works by Mr. Liu Jiu'an, as well as a set of poems exchanged with cultural celebrities that have never been made public. Among them are the handwritings of Mr. Zhang Heng, Xu Bangda, Xie Zhiliu, and Qi Gong.