China Weather News from today (April 14) starting at night, a new "all-round" cold air will appear, bringing high winds, sand, dust, rain and snow, and cooling "packages" to northern my country, which will affect about 14 provinces. District city. Among them, sand and dust are mainly concentrated from today to tomorrow. Some areas in Northwest China and North China may find sand and dust. Rain a 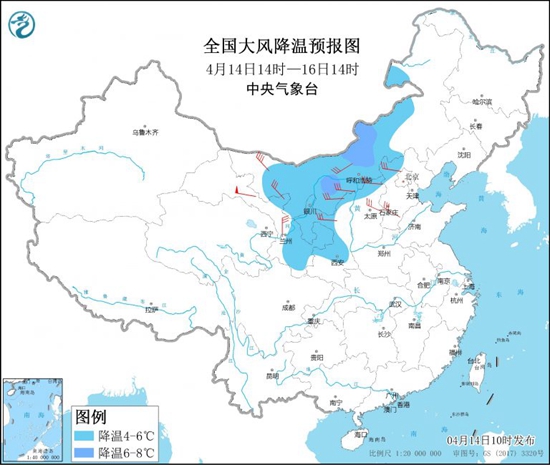 Among them, sand and dust are mainly concentrated from today to tomorrow. Some areas in Northwest China and North China may find sand and dust. Rain and snow will drop in temperature most obviously tomorrow and tomorrow. Among them, there may be blizzards in Inner Mongolia and Northeast China.

The impact of gale and dust in the north will be mainly due to local gusts reaching level 10 in North China tomorrow.

Starting this night, a blast of "all-round" cold air will appear, bringing windy weather to most of the north.

Specifically, in the next three days, there will be strong winds of 5 to 6 in the eastern part of Northwest China, North China, Northeast China, and eastern Huanghuai, with gusts of up to 8-10.

According to Shi Yan, a meteorological analyst at China Weather Network, the areas affected by gales today are mainly concentrated in the central part of Inner Mongolia, Shaanxi, and the northwestern part of Shanxi, and gusts of magnitude 6 to 7 will generally occur.

Tomorrow is the most important period of strong winds, and the range of influence will shift eastward. Gusts in high-altitude areas in northern North China may reach 10-11 levels.

For example, in Beijing, the northerly wind will blow strong in the afternoon tomorrow. The afternoon is the strongest period. The strong wind may last all day. The day after tomorrow, there will still be northerly winds of magnitude 4 to 5 and gusts of around 7 magnitude.

Affected by cold air and strong winds, sand began to rise in the southern Xinjiang basin of Xinjiang and central and western Inner Mongolia starting this night.

Today and tomorrow, the eastern part of Northwest China, the central and western parts of Inner Mongolia, parts of northern China and other places will experience sand or floating dust weather from west to east, and there will be sandstorms in parts of western Inner Mongolia.

Perennially, in my country, April is still a period of high occurrence of sand-dust weather, and the sand-dust process can reach 4.3 times.

Recently, sand and dust weather has come frequently in northern my country, and the public needs to pay attention to nowcasting in time and do a good job of protection.

The temperature has dropped significantly under the influence of local blizzard, wind, rain and snow in Northeast Inner Mongolia

In addition to windy and sandy weather, this cold air process will also bring rain, snow and cooling.

Shi Yan introduced that the reason why the snowfall in eastern and northeastern Inner Mongolia was so strong this time was because the upper-altitude trough gradually moved eastward to the northeast. The low-altitude southerly wind in front of the trough was stronger, and the dynamic conditions and water vapor conditions were well coordinated.

At the same time, the eastern part of Northwest China, North China, Northeast China, eastern Huanghuai and other places will usher in cooling from west to east, and the temperature will generally drop by 4 to 8°C. Before the impact of the cold air, northeast and north China will be full of warmth today and tomorrow. The highest temperature in places such as Beijing, Tianjin, and Shijiazhuang can reach above 20°C, and the three northeast provincial capitals will also be close to 20°C. However, the day after tomorrow, with the arrival of cold air, the above-mentioned areas will experience significant cooling, especially in the Northeast. With the cooperation of strong winds, rain and snow, many places will feel a lot colder. In provincial capital cities, like Changchun Tomorrow the highest temperature will still be 19℃, and the day after tomorrow will drop to only 9℃. The temperature fluctuates and fluctuates and it is easy to catch a cold. Local friends should pay attention to adding clothes in time. (Text/Jiang Yi Data Support/Shi Yan)