What does it mean to have a 1,000-square-meter yard? Experience the photographer's dream life

What is the experience of having a 1,000 square meter yard? "Post-80s" photographers create "aspirational life"   Author: Yao Yan Yu   In the summer of 2017, Aman, a "post-80s" boy, rented a 1,000-square-meter wasteland in Yuejin Village, Longquanyi District, Chengdu, and in October of the same year, he started a road to renovate his yard alone. He named it "Uncle Man's Yard". "Uncle Man's Yar 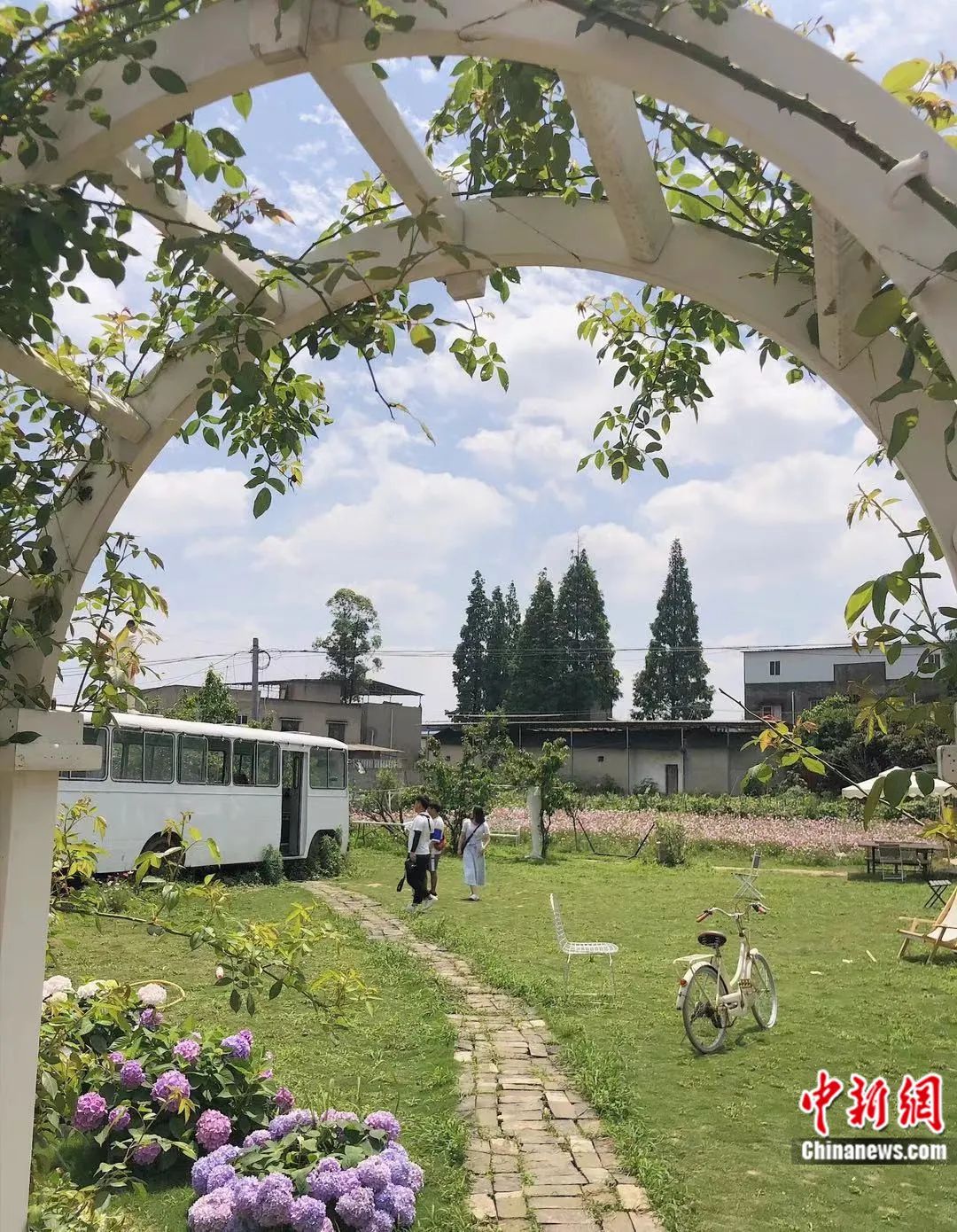 What is the experience of having a 1,000 square meter yard?

In the summer of 2017, Aman, a "post-80s" boy, rented a 1,000-square-meter wasteland in Yuejin Village, Longquanyi District, Chengdu, and in October of the same year, he started a road to renovate his yard alone. He named it "Uncle Man's Yard".

Because of the pursuit of aesthetics and the lack of funds, everything in "Uncle Man's Yard" was done by himself, digging the ground and fences by himself... Now, he has also opened his own account on the online platform, although fans Not much, but he still updates his transformation videos intermittently.

Nowadays, "Uncle Man's Yard" has become a well-known filming location, attracting many young people to check in and take pictures, and abandoned buses have been transformed into what he likes. Many netizens think this is them. Longing for life.

People who come here to shoot.

He said: "In this life, in addition to seven emotions, six desires, money, rights and benefits, people should also do some cool things."

Once as a photographer "wandering around the world"

Before being known as the owner of the yard, Ah Man was a photographer and set up a photography website called Group 19, which was well-known in the industry.

Aman, who worked as a photographer before, traveled around the world for 7 years.

But suddenly one day, he "stopped" and decided to return to his hometown and settle down.

Many friends were surprised by his choice.

In this regard, Aman said: "I feel like I have been floating outside for too many years. I was also a bit impetuous for a while, so I wanted to find a place where I could calm down and do things. Also because I was born in a rural area. , I like rural life very much, after searching for a long time, I finally found this yard."

Aman also considered Dali in the past, and even settled in Thailand, Japan and other countries, but in the end he chose Chengdu.

"Because I am a family lover, and I chose Chengdu because I am from Sichuan. It is not far from my home. I have also lived in Chengdu for more than 10 years. The eating habits and living atmosphere here are very suitable for me."

The yard was rented by Aman, and he signed a 15-year contract with the landlord.

People often ask Ah Man if he is afraid that after he has spent so much time and experience building the yard, the landlord will suddenly take back the house and land.

Aman smiled and said, "Actually, I don't worry too much, because interlacing is like a mountain. Many things are not something that you can succeed if others succeed. Even if the landlord repossess the house now, it will not produce value.

"Because I was a photographer before, I am actually still taking a photo order. In fact, there is a big problem in the process of taking photos. The conversion between scenes and scenes will actually consume the photographer and the guests. Most of the energy. So I wanted to create such a place at the time, it is not only my studio, but also my home. I can also create some scenic spots suitable for taking pictures, which can save a lot of time. For me, This is also equivalent to building a platform. On weekends or when the weather is good, friends can also come to me to cook, chat, and communicate with each other. This is also a very beautiful thing for me."

The road to yard renovation alone

Spend a lot of time and money

In order to build a good "Uncle Man's Yard", Ah Man paid a lot of time and money on it.

In the barrage of online platforms, netizens often leave messages saying: Why doesn’t Ah Man ask someone to help?

It's too hard for one person.

In this regard, Aman also answered everyone’s questions: “The first is that the funds are limited and the labor cost is very high. Although a single time may not be a big expense, it is put into the operation and maintenance of the entire yard. If it does, it’s actually a big overhead."

"Secondly, I have a lot of ideas myself. I don't mean that they can do it by giving money to others. So many things still need me to do it myself. Because what I build is not an online celebrity shop, what I build is what I have in my mind. The yard. I think the aesthetic is my own, and I want to incorporate more of my own ideas, and then go and get it out by myself."

Many netizens would be curious, what is the source of funds for Ah Man to renovate the yard?

In order to build this yard, Aman initially relied entirely on savings to maintain it. Later, he would take some photography orders every year, and then put the money earned from photography into the yard. After that, the yard would also generate some benefits, and then add it every year. Back and forth.

In the eyes of others, the process of building the yard seemed very laborious, and Ah Man himself actually enjoyed it.

Aman feels that if you like something, you can't just look at its best side, but you have to feel its hardship.

So to Aman, these difficulties are his precious wealth, even a small one, after solving it, it can make him excited all day.

At the gate of "Uncle Man's Yard".

On the doorplate of "Uncle Man's Yard" is also engraved such a paragraph: one house, one person, three meals, and four seasons.

"Uncle Man's Yard" the lobby on the first floor.

Aman is an old-fashioned person. The lobby on the first floor of the small courtyard was built by him in the style of the 1980s and 1990s. It is basically matched with old objects, such as cabinets, tables, TVs, small objects... With a strong retro style.

One of the two rooms on the second floor is fresh and the other is Japanese style.

Aman, who is deeply influenced by Japanese animation, has one of the rooms inspired by the movie "Your Name".

The kitchen was turned into an open kitchen by Aman.

A Man has always had an imaginary scene in his heart, hoping to face the open kitchen while eating, with a row of wind chimes swaying in the wind outside.

The small garden next to the small courtyard has been undergoing renovation since 2017. At that time, Aman envisioned that the entire courtyard was surrounded by a sea of ​​flowers. It has now achieved 90%. The only thing is that half of the front of the courtyard is not covered. Probably next year, he The idea should be realized, and Ah Man is looking forward to it.

In the 1000-square-meter large yard outside, all kinds of flowers such as roses are blooming on the flower stands. In the center of the yard, there is an abandoned bus that Aman bought from Hebei in 2018 when he exhausted his savings. Aman was transformed into the most conspicuous presence in the courtyard.

A bus remodeled by Aman.

In addition, Aman originally wanted to build a small ranch to raise some small animals, but he often saw netizens on the Internet jokingly saying, "It's a pity that such a big land doesn't grow vegetables."

In addition, the movie "Little Forest" has a great influence on him. He likes the warm feeling very much, so-"Then I will try to grow vegetables! If the harvest is not good, I We will raise small animals next year." Aman smiled freely.

In the video on the Aman network platform, he wrote: In this life, in addition to the emotions, the power and the benefits of money, people should also do some cool things in their lives.

In this regard, Aman interpreted: "I think that in addition to the realistic pursuits of firewood, rice, oil, salt, sauce, vinegar and tea, marriage and child generation, we must also pursue some spiritual things, whether we have dreams, ideals, or love."

Aman is on the wall of the courtyard.

Many netizens directly called Ah Man to live the life they longed for.

Ahman said, the reason everyone thinks this way is because everyone has their own dreams, but because of various reasons they didn’t do it, and he did it, so what everyone yearns for is actually what they are in their hearts." Beautiful".