"Watching a movie in 5 minutes" will become a thing of the past?

Chinanews client, Beijing, April 10th (Reporter Ren Siyu) "Watch xx movies in 5 minutes", "xx takes you to TV series", "x minutes to quickly watch blockbuster movies"... You may often browse on social platforms and short video platforms With this kind of video, as people chase the drama faster and faster, this kind of short video has even become a new way for the audience to follow the drama. 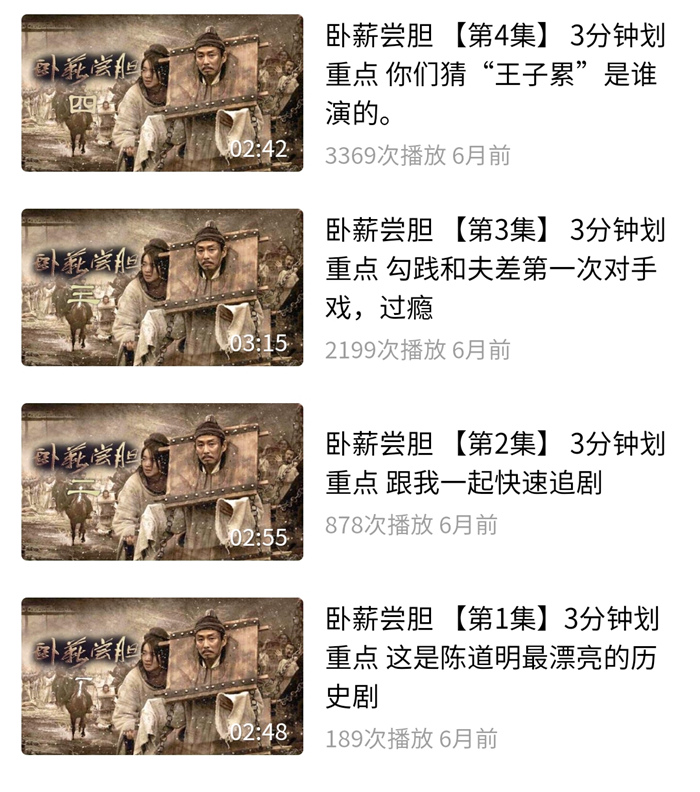 Chinanews client, Beijing, April 10th (Reporter Ren Siyu) "Watch xx movies in 5 minutes", "xx takes you to TV series", "x minutes to quickly watch blockbuster movies"... You may often browse on social platforms and short video platforms With this kind of video, as people chase the drama faster and faster, this kind of short video has even become a new way for the audience to follow the drama.

However, without authorization, these film and television series editing accounts are at risk of infringement.

On April 9, a number of associations, video platforms, and film and television companies issued a joint statement, calling on the majority of short video platforms and public account producers and operators to respect originality, protect copyright, and not to edit, cut, or edit related film and television works without authorization. Infringements such as handling and dissemination.

Nowadays, as long as the audience retrieves a hit film and television drama on the short video platform, there will be a large number of short videos that have been re-edited and moved.

Taking "Mountains and Seas" as an example, viewers can see many videos that quickly explain the plot of each episode. Among them, some accounts edit the essence of each episode together, and then release them in the form of "collections", and they can even get tens of millions of them. Play volume.

By re-editing and re-interpreting film and television drama works, this type of "content porter" account can often attract hundreds of thousands or even millions of fans, and can successfully make money through delivery, live broadcast, and advertising.

At the same time, due to the low threshold and "high cost performance", this type of account has attracted imitators one after another. Some of the accounts even have "recruitment" written in their names. They not only make profits by selling "handling tutorials" and teach buyers It avoids the risk of infringement by cutting, drawing frames, adjusting the speed, turning the level, adjusting the saturation, etc., and also offers high-priced courses to teach the method of monetizing film and television clips.

According to the 47th "Statistical Report on China's Internet Development Status" released by the China Internet Network Information Center (CNNIC), as of December 2020, the number of online video users in China has reached 927 million, of which 873 million are short video users, accounting for netizens. The overall 88.3%.

Behind such a large scale, there are more and more infringement disputes involved in short videos.

According to the report, short videos are becoming the latest high incidence of Internet intellectual property infringements, and popular TV shows, variety shows, and theater movies are the "hardest hit areas" for infringements.

In 2017, five film and television companies including Disney sued the video blogger "Gu Amo", claiming that their unauthorized use of movie clips in the "X minutes to watch the XX movie" series of videos was an infringement.

In response, Gu Amo responded that it was a secondary creation, which complies with the principle of fair use of online copyright and does not involve infringement.

In 2019, Gu Amo went to the court to appear in the mediation meeting. Gu Amo said at the time that it is not convenient to express any opinions on the case, and hopes that the other party can provide a specific compensation plan to have room for discussion.

He estimated that the whole incident will take two or three years before there is a result.

In fact, not only video clips, but also screenshots of film and television dramas used in editing, there is also a risk of infringement.

In August 2019, the Beijing Internet Court ruled the first case involving the infringement of film and television works into photo albums.

According to the Beijing Internet Court, youku sued the operator of the "Illustration Movie" platform for infringing on the right of information network dissemination because it believed that the "Illustrated Movie" software had provided continuous atlas of the TV series "Three Lives III Shili Peach Blossom" without permission. The operator of "Film" compensated the plaintiff for economic losses of 30,000 yuan.

In recent years, with a series of more and more regulations on the protection of film and television copyrights, this kind of quick-cut, quick-interpretation of short-cut films and short videos may become a thing of the past.

Screenshot of the "Joint Statement".

The "Joint Statement" stated that in recent years, the field of short video self-media entrepreneurship has flourished. Rich and interesting short video works satisfy people's consumer demands for creating, displaying, sharing and efficiently using fragmented time to watch outstanding works. The infringement situation of the production and operation of the official account of the film and television strips is becoming more and more serious.

The "Joint Statement" pointed out that the current public account producers and operators on the Internet will edit, move, cut, and disseminate unauthorized content of film and television content, and will initiate centralized and necessary rights protection actions.

The sponsors also called on operators of short video platforms and official accounts to raise their copyright awareness, and when editing, moving, cutting, and disseminating film and television content, they should check whether they have obtained legal authorization to avoid infringement; and call on all sectors of society to actively take infringing content. Report, delete, and block, jointly prevent and resist infringements, and jointly safeguard the legitimate rights and interests of the film and television industry.