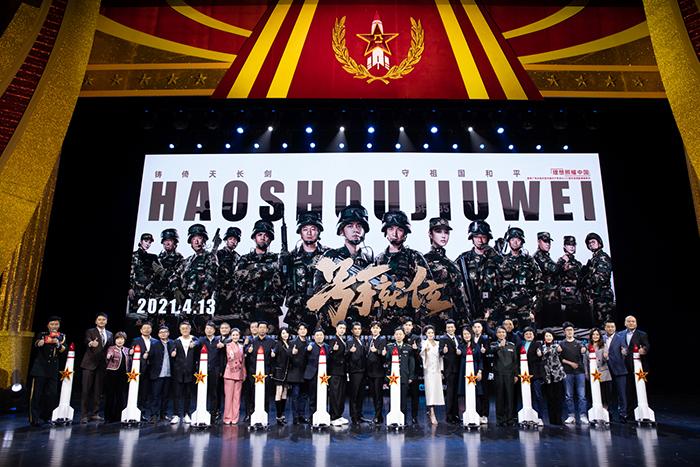 As China’s first Rocket Army-themed film and television work, "The Trumpeter is in Place" is adapted from the novel "Graduated and Going to the Army" by the young Rocket Army writer Feng Jie. It vividly reflects the growth story of four local college students joining the Rocket Army with different dreams. Vivid practice and demeanor of officers and soldiers in the transformation and development of the Rocket Army.

The scene of the press conference.

Photo courtesy of the event party

The play was officially launched in 2018, and it took more than 3 years to complete the creation and polishing. It will be used as the "Ideal Shines in China" show program of the State Administration of Radio, Film and Television to celebrate the 100th anniversary of the founding of the Communist Party of China and the key theme of the cultural creation of the Political Work Department of the Central Military Commission, on April 13 It was broadcast on Zhejiang Satellite TV, Jiangsu Satellite TV and Youku Video.

At the press conference, Wang Yongxiao, Director of the Propaganda Bureau of the Rocket Army’s Political Work Department, said on behalf of the military producer of the play: “The Rocket Army is the core force of China’s strategic deterrence, the strategic support of China’s status as a major power, and an important cornerstone of safeguarding national security. Over the years, generations of officers and soldiers have been concentrating their swords in the deep mountains and dense forests, and staying silently in the Gobi desert, making this mysterious team grow from small to large, from weak to strong. "Dongfeng Express, mission must be achieved" has become China. Strength, China's confidence, and China's confidence. The creation and launch of a rocket army theme film and television work, unveiling the mystery of the Chinese strategic missile force, and showing the era of the rocket army, is not only the eager expectation of the broad masses of people, but also the hope of the broad masses of the rocket army. dream."

Wang Yongxiao introduced that by telling the story of college students serving as soldiers, the play shows the love of the party, the country and the army of young people in the new era, and demonstrates the strength of China that is resolutely winning without fear of powerful enemies.

The whole drama has a clear theme, vivid plot, and smooth narration. It is a military drama that reflects the reform and strengthening of the army in the new era and demonstrates the excellent capabilities of the service. It is a masterpiece of realism that focuses on military training and preparation, and has a sense of grounding. Fighting for ideals and reshaping the young people's idol view is a youth inspirational drama.

As the chief producer, Duan Yan, CEO of Baimo Pictures, and Zhang Bohui, CEO of Huarui Pictures, are both military backgrounds. They sighed that they had been sharpening their swords for several years to create "The Trumpeter Is in Place", and their hearts are always boiling with the love of the army and the patriots. situation.

Director Zhang Hanbing said that the process of filming "The Trumpeter in Place" was both difficult and happy, and it was an unforgettable filming experience for him.

At the press conference, the two screenwriters Ying Liangpeng and Zu Ruomeng said that they believed that "Xia Zhuo" was Li Yifeng when they created the style in 2018. After the script took more than two years to create, in order to be able to invite Li Yifeng to play, They also wrote a special letter to Li Yifeng.

The scene of the press conference.

Photo courtesy of the event party

Talking about the feeling of wearing a military uniform for the first time, the lead actor Li Yifeng said: "To be honest, I am very shy and don't dare to look at me in the mirror. I never thought about wearing a military uniform, and never thought about acting as a soldier, especially a rocket army. I’m a little embarrassed.” After three months of shooting, Li Yifeng suddenly felt like he had a dream on the way to the airport after finishing shooting. “It’s really like being a soldier. It’s like being discharged today. I won’t get used to it the next day, and I feel like I’m still in the army since I haven’t found Li Yifeng in the job that I started right after.”

Li Yifeng led the crowd to feast, and everyone said that they had tasted the taste of the army, which immediately brought back fond memories of the shooting.

Zhang Xinyu, the lead actor who is a military wife, said that she has a lot of fate with the army and the soldiers, and now she sees the soldiers as a family.

In the play, Xiao Yang, who played the veteran Lang Yongcheng, and his wife Lang Jicheng, the prototype of the veteran, took the stage together, sharing the life of Lang Jicheng and his lover for decades.