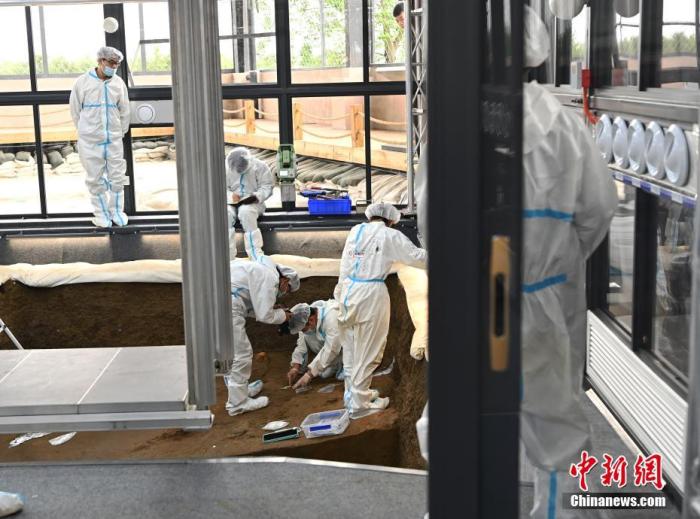 In the early morning, the sun "woke up" the sleeping Sanxingdui site and also announced the beginning of a busy day for archaeologists.

Wang Zuodan, a second-year graduate student of the School of Archaeology, Culture and Science of Sichuan University, put on protective clothing proficiently, and entered the archaeological work cabin where No. 5, 6, and 7 "sacrifice pits" were located as usual.

In addition to cooperating with the excavation and cleaning, she also needs to record the daily excavation in detail, so that a complete excavation record report can be formed later.

The log of field archaeological work about 5 cm thick in Wang Zuodan's hand has been half-filled. The neat handwriting records in detail the specific conditions, three-dimensional coordinates, cultural preservation measures, advancement of excavation work, and excavation ideas of each unearthed artifact.

"Archaeological excavation is an irreversible process, so complete data must be formed to facilitate further research in the future." The 24-year-old Wang Zuodan still looks immature, but he is very serious when talking about work.

There are more than 200 archaeologists involved in the excavation of the six newly discovered "sacrifice pits" in Sanxingdui, of which more than three-quarters are "post-90s" and PhDs.

They carefully cleaned up every fill in the "sacrifice pit" in centimeters. They not only proficiently used various "black technologies" to protect and restore the unearthed cultural relics, but also painted creative graffiti on the outside of the protective clothing, in the ancient Sanxingdui The site shows the strength and vigor of a new generation of Chinese archaeologists.

"Although archaeological research is about history, it does not mean that this is an ancient industry. In fact, it is developing vigorously and needs new practitioners to join in." Engaging in archaeological work is Wang Zuodan's dream since she was a child. She hopes that she Be able to put forward new ideas and contribute to the development of archaeology.

"Although we are still young, we are very hardworking and determined, and we are growing every day."

In fact, most of the "post-90s" who participated in the excavation of the "sacrifice pit" have had field archaeological experience.

"Every time I see the artifacts in the pit, I feel that I am talking to the ancient Shu ancestors. This is one of the charms of archaeology, and it is also the most attractive place for me.

Although archaeologists wore uniform white protective clothing when excavating the site, many "post-90s" archaeologists brought creative words such as "please call me a red scarf" and "being faithful to the country" written on their backs to the serious archaeological site. Youthful and lively breath.

"Behind me is'The Great Wall never falls.' I want to add some fun to the intense archaeological work and make it easy for everyone to recognize." Yang Hairong, a senior student of Sichuan University who was born in 1998, said with a smile.

No. 7 "sacrifice pit" where Yang Hairong is located has not yet been excavated to the artifact layer.

In the eyes of others, the 8-hour filling and cleaning work a day for more than a month may be a little boring, but in the eyes of this "post-90s" girl, "there is something new every day."

"If you identify carefully, every few centimeters of soil have subtle differences." Yang Hairong said that archaeology is not "excavating for the sake of artifacts", but to restore history as much as possible. She feels that it is not meaningful.

"'Archaeological youth' is a must. Any industry needs to be constantly injected with'fresh blood' before it can always show its vitality." Ma Yongchao, a teacher from the School of Archaeology, Culture and Museum of Sichuan University who led a team to carry out archaeological work in Sanxingdui, also "90 Rear".

"Archaeology is by no means a rigid subject, and the archaeological site can also be full of youthful vitality." (End)