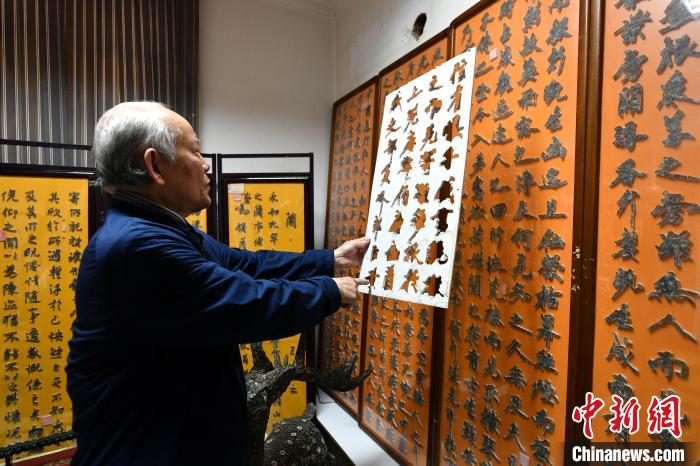 Baoding, sailing boats, swords, calligraphy, paintings, and the decorations in the studio are mostly related to coins.

Among them, the "Ancient Coin Mosaic Method" he developed, the calligraphy and painting works made of a large number of ancient coins with no actual value are very shocking.

The picture shows the handicraft made by Ye Liqi using ancient coins. Ye Liqi is introducing the creation process.

Ye Liqi said that ancient coins have witnessed the development and changes of Chinese history, and a small ancient coin embodies a profound cultural heritage.

However, with long-term natural erosion and rusting, some ancient coins become broken and useless due to illegibility, excessive oxidation, etc., and can only be treated as scrap copper and rotten iron, which is a pity.

The picture shows the handicraft made by Ye Liqi using ancient coins.

Ye Liqi has been collecting ancient coins for more than 30 years.

Out of love, he thought: How to turn broken ancient coins into treasures?

For this reason, in his many years of collecting life, he has been thinking, discussing and researching.

Here, he used broken ancient coins to arrange and paste them into "unicorn", "blue dragon" and other beasts and "12 zodiac signs", but the craftsmanship is "simple" and cannot be "satisfied."

In 2016, a regular script calligraphy work "Shen Lun" presented by a Japanese friend touched his "inspiration."

"I suddenly thought, can I use broken ancient coins to make calligraphy works?" So Ye Liqi began to try.

In order to better protect his own interests, after more than a year of deliberation and application, he obtained the utility model patent certificate of "A kind of calligraphy and painting crafts inlaid with ancient coins" issued by the State Intellectual Property Office on June 15, 2018 .

"It opened and laid a new page for me to inherit and carry forward the old coins, turning waste into treasure, and protecting and using them." Ye Liqi said.

After that, he began to try to use ancient coins to make objects such as "ding", "sword", and "boat".

In the studio, a painting caught the attention of reporters.

The picture shows Ye Liqi's handicrafts made from ancient coins. The ancient trees and two birds in the paintings are all inlaid with Yan Guoming swords.

"Yan Guo Ming Knife is the currency used in the circulation of Yan State in the Spring and Autumn Period and Warring States Period." Ye Liqi pointed to the currency in the painting and told reporters that many of the Yan Guo Ming knives unearthed after being buried in the soil for nearly two thousand years are broken and have no real value.

Therefore, in line with the idea of ​​waste recycling, he inlaid the collected currency into paintings.

Copying, engraving with double hooks, distinguishing the color of coins, tailoring of ancient coins...After more than ten steps, a calligraphy and painting work can be completed.

The picture shows the handicraft made by Ye Liqi using ancient coins.

So far, he has created more than a hundred works of calligraphy and painting on ancient coins.

"I used to collect tons of worn-out ancient coins, but now there are not many left." The 74-year-old Ye Liqi is more than ancient. In his opinion, collecting is a hobby and a complex.

Ye Liqi said that he likes to see people respond to his coin art creation; he hopes that viewers will marvel at it and appreciate the difficulty in it; but he does not want to explore the value of his work.

"I very much hope that there is an ancient house or a platform that can properly exhibit these works and let more people understand the culture of ancient coins." (End)