The box office exceeded 700 million! "My Sister" leads the way, how to make the strongest Qingming file?

Chinanews client, Beijing, April 5th (Reporter Yuan Xiuyue) Did you go to the movies on Ching Ming Festival? After experiencing the downturn in March, the film market finally ushered in a small outbreak during the three-day long holiday. More than a dozen films are on the battlefield, with a single-day box office exceeding 300 million, a total box office of over 700 million, and a single box off 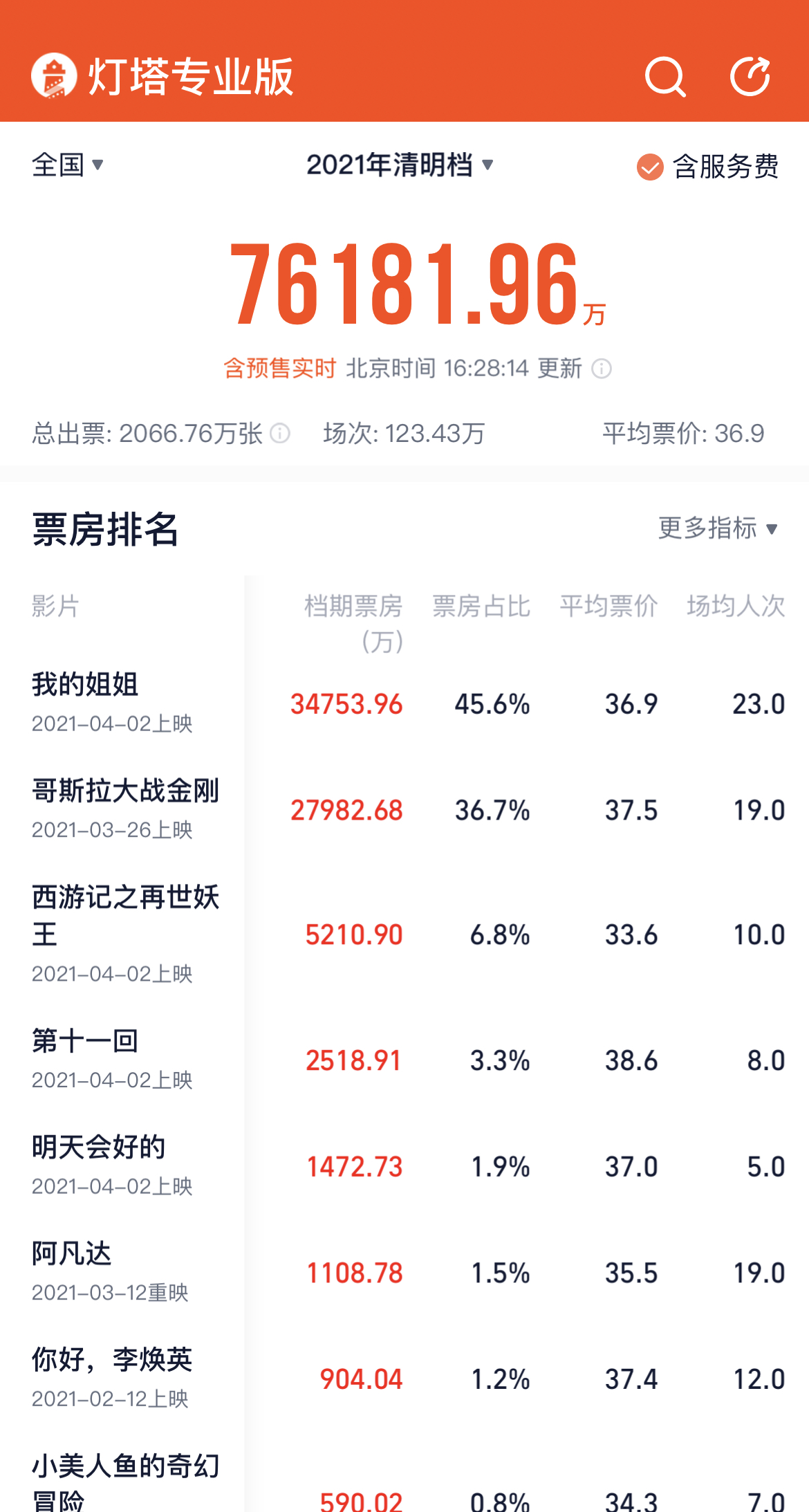 After experiencing the downturn in March, the film market finally ushered in a small outbreak during the three-day long holiday.

After the Spring Festival, the movie market fell into a low ebb in March, with a monthly box office of only 2.5 billion yuan, much lower than the same period in previous years.

This situation will not appear in April. According to the Beacon Professional Edition data, as of April 5, the monthly box office in April has been close to 1 billion yuan.

In 2021 Qingming file, more than ten films have been released successively, including the Hollywood blockbuster "Godzilla vs. King Kong", and domestic films such as "My Sister", "The Eleventh" and "Tomorrow Will Be Good", which injects into the film market A shot of a cardiotonic.

This year, Qingming files set a number of new records.

Among the major movie schedules, the Qingming file has always been a relatively embarrassing existence.

"My Sister" becomes a dark horse

"Godzilla vs. King Kong" becomes the most recent Hollywood blockbuster at the box office

Among the more than ten films in the Ching Ming Festival, the two films "My Sister" and "Godzilla vs. King Kong" accounted for more than 80% of the total box office.

"My Sister" is written by You Xiaoying, the best screenwriter at the Academy Awards, directed by the cutting-edge director Yin Ruoxin, starring Zhang Zifeng, Xiao Yang, etc. The current Douban score is 7.3 points.

In the film, Zhang Zifeng plays an older sister who grew up in a patriarchal family. After her parents passed away in a car accident, she was faced with a difficult choice between pursuing an independent life or raising her younger brother.

"At present, the traditional gender order of male superiority and female inferiority is undergoing profound changes, and a modern new order of equal personality between men and women is taking shape. Through a series of dramatic conflicts, the film reveals to us this profound change that has occurred on the land of China."

At the end of the movie, an open ending is given, and netizens have different opinions.

Some people think that the ending is "forced reconciliation," while others think that women have no standard answer and should support every self-determination.

Under the fermentation of these topics, "My Sister" also caused a movie-watching boom, breaking the box office record of the Qingming file in Chinese film history.

On the other hand, the monster movie "Godzilla vs. King Kong" is not to be outdone, and the box office has been rising since its release on March 26.

As the same series of movies, the box office of "King Kong: Skull Island" and "Godzilla: King of Monsters" are both around 1 billion.

From the current point of view, the results of "Godzilla vs. King Kong" are "stability and improvement", and will soon surpass the first two.

It is worth noting that the film is also very popular in overseas markets. It won a box office of 48.5 million US dollars in five days in the first weekend, breaking many North American box office records during the new crown epidemic.

According to reports and analysis, "Godzilla vs. King Kong" represents a sign that the North American box office has returned to normal in the past year.

Compared with the previous domestically released "Creed", "Mulan", and "Wonder Woman 1984", this film is also the best-performing Hollywood movie in the Chinese market since the epidemic.

"Eleventh" "Tomorrow Will Be Okay" Why is it misfired?

This year’s Ching Ming film also includes "The Eleventh", "Tomorrow will be good", "Life", the animated film "Journey to the West: The Reincarnation of the Demon King", and the cartoons "The Fantasy Adventure of the Little Mermaid" and "The Adventures of the Strange World".

"Tomorrow will be good" is supervised by Jia Zhangke and starring Papi Jiang.

Both of them are comedies. They were originally strong contenders for this year's Ching Ming file, but they were "misfired" after they were released. At present, the box office of the two films does not exceed 50 million yuan.

"The Eleventh Chapter" tells the story of the straightforward old man Ma Fuli "making trouble" with the city repertory troupe due to a case that happened many years ago and was adapted into a drama. The film has a strong personal style, but because the film has a strong drama flavor, it is also Aroused bipolar evaluation on the Internet.

Some netizens think that the director has unique ideas and black humor.

Some people also said that the film could not be understood, "I can't appreciate it." At present, the Douban score has dropped from 8.4 to 7.5.

"Tomorrow will be good" is a film that tells the story of Bei Diao, and is a new work by Yuan Yuan, the screenwriter of "We Later".

However, "Tomorrow will be good" is not as resonant as the latter.

Some netizens commented that the story is weak and the plot is relatively flat. The current Douban score is 5.8.

"Tomorrow will be good" poster

Observing this year's Qingming file, we can see several trends.

First, there is still a big market for family-themed works. Whether it's "Hello, Li Huanying" or "Send You A Little Red Flower", it is all about finding resonance in small incisions and personalized stories.

The second is that real-themed movies are waiting for more masterpieces, moving from the fringe to the center of the market.

Third, as the vaccination rate increases and epidemic prevention and control are in place, the global film market will gradually accelerate its recovery.