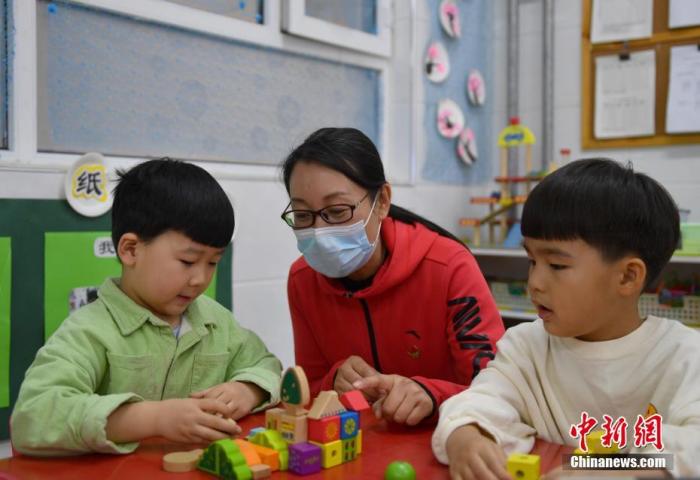 Driverless cars, robot assistants, flying houses...Walk into the Xiong’an campus of Beijing Liuyi Nursery School in Xiong County, Xiong’an New District. A colorful “dream wall” greets you with paintings on the walls. Full of children's dreams about this "city of the future".

"The best education is to be close to the children's life." Li Hongdong said that in the past three years, her and her colleagues' efforts have not been in vain.

In the millennium plan, education is the first priority.

In March 2018, the Beijing Municipality Aid Xiongan New District School Project was officially launched. As one of the first aid units, Yuanxiong County Kindergarten was officially inaugurated as the Xiong'an Campus of Beijing Liuyi Nursery School.

Li Hongdong, who came with the original intention of "cultivating future Xiong'an builders", first felt that "it is not easy for teachers here."

The class size is large, but the teachers are very weak.

At that time, only 30% of the teachers in Xiong'an Campus were in kindergarten teachers, while in Beijing, almost all of them had a college degree or even a bachelor degree or above in preschool education.

The picture shows on March 18th, students from the Xiong'an Campus of Beijing Liuyi Nursery School are doing inter-class activities.

Beijing's assistance has brought changes to the school: the hardware facilities for running the park have been improved, and four functional classrooms have been established for science, fine arts, Chinese studies, and picture books.

Through sub-groups and sub-regional activities, the impact of large classes can be reduced and the quality of education can be improved.

In response to the problem of weak teachers, Beijing Liuyi Nursery School started with various forms of teacher training to improve the professional level of teachers in Xiongan Campus. Teachers from Xiongan Campus also went to Beijing to study in batches.

“Beijing’s advanced educational concepts should be rooted in Xiong’an.” While the software and hardware facilities are gradually being improved, Li Hongdong and his colleagues are based in Xiong’an to find educational “fulcrums” to guide children to pay attention to the plants and trees in Xiong’an, and to ignite the children’s "Xiongan Dream".

The Xiong’an campus of Beijing’s Zhongguancun No. 3 Primary School is also making the same effort.

"We have been discussing, what else can we do on the basis of fully opening up the nationally prescribed courses?" said Liu Xia, a teacher of aid education in Beijing. In the past three years, teachers from the two places have worked together to form some special courses across disciplines. For example, the integration of music and sports, and the integration of calligraphy and Chinese classical poetry. Two or more teachers teach together. The classroom is no longer confined to the classroom, which improves teachers' understanding of interdisciplinary concepts and stimulates students' vitality.

"If the school has a farm, we will develop farm courses based on farms and orchard courses based on orchards. This characteristic course not only helps children broaden their horizons, but also makes local teachers realize that everything around them can become teaching resources." Liu Xia said.

According to Liu Xia, the school has also developed nearly 30 club courses such as 3D printing, programming, and model aircraft. With limited teachers, it uses social resources to develop more courses for children and tap their potential, which is welcomed.

At special nodes such as the International Children's Day on June 1st, the school will also invite staff from Beijing Luxun Museum and Beijing Natural History Museum to bring exhibits to Xiongan to broaden students' horizons through exhibitions and other forms.

The picture shows that on March 18, Chen Wenhua, member of the Party Committee of the Xiongxian Education Bureau of Xiong'an New District, was interviewed by a reporter from China News Agency.

"Since the Beijing-Tianjin-Hebei high-quality educational resources are matched and aided, the education ecology has been improving." Chen Wenhua, a member of the Party Committee of the Xiongxian Education Bureau of Xiong’an New District, said that the county has 18 schools of all levels and types of schools and Beijing-Tianjin-Hebei high-quality schools. The docking has led to a general improvement in the quality of county education and teaching, and the gap between urban and rural education has gradually narrowed.

At the same time, the overall quality of students has also been greatly improved.