A must-go for a self-driving tour! These eight highways hide "poems and distant places"

Author: Liu Liang   The spring is warm, the garden is full of flowers, the butterflies are flying, the people are like weaving... The best of spring is the best time of the year. The spring scenery of the Three Gorges "Water Ecological Highway" is charming. Photo by Li Ming   It is said that "life is not only about the present, but also poetry and the distance." Spring is here, it is a good 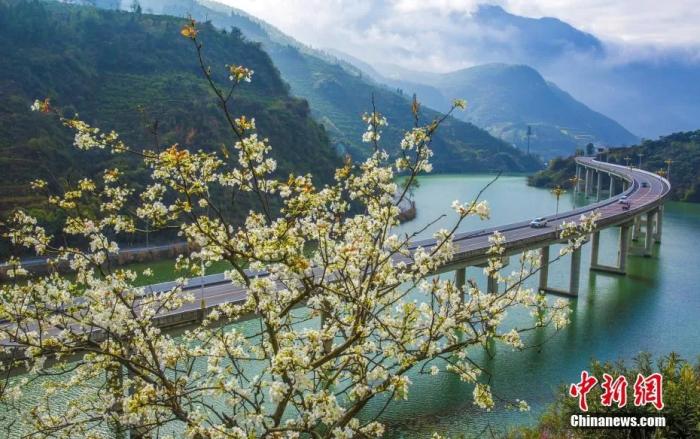 The spring is warm, the garden is full of flowers, the butterflies are flying, the people are like weaving... The best of spring is the best time of the year.

The spring scenery of the Three Gorges "Water Ecological Highway" is charming.

It is said that "life is not only about the present, but also poetry and the distance." Spring is here, it is a good time to go out and visit the wonderful rivers and mountains of China.

But China has a vast territory, where should we look for "poems and distant places"?

In order not to bother you, we have specially sorted out the beautiful scenery along the well-known domestic highways for this purpose. I believe there must be a "poem and distance" exclusively for you.

The Lanhai Expressway passes through Gannan and the Northwestern Sichuan Plateau, along the northeastern edge of the Chengdu Plain, crosses the Yangtze River in Chongqing to the south into the hilly areas of the Yunnan-Guizhou Plateau, travels south through Nanning to the coast of Guangxi, and crosses the Qiongzhou Strait from Leizhou Peninsula to Hainan Island.

The site of the Zunyi Conference in Guizhou Province.

The following highway, I believe that friends who like the red journey will not miss it.

The Bao-Mao Expressway passes through the grasslands and sandy land of the Ordos Plateau and the Loess Plateau in central and western Inner Mongolia, crosses the Qinling and Daba Mountains, crosses the Yangtze River in Chongqing to the southeast and enters the Qianjiang and Xiangxi mountains and hills areas, and crosses the Vietnam Ridge to the western coast of Guangdong via Guilin. .

There is currently the longest highway tunnel in the world-Qinling Zhongnanshan Tunnel.

The Qinling Zhongnanshan Tunnel was rated by netizens as "the ten most beautiful highways in China" and "a must-go place for self-driving travel in this life".

Here are the first batch of national historical and cultural cities-Yan'an.

Nanni Bay is one of the tourist attractions in Yan'an. The spirit of Nanni Bay has inspired generations of Chinese people to overcome difficulties and win victories.

The data picture shows the appearance of Shibadong Village.

The Hunan section of the Baomao Expressway also connects Jishou and Huaihua in Hunan, passing by Mao Zedong’s former residence, the Hunan, Hubei, Sichuan and Guizhou Revolutionary Bases, and the former site of the Autumn Harvest Uprising.

Since its construction, the G98 Hainan Island Ring Expressway is still the busiest aorta in the Hainan road network.

Around the island, you will find all the historical culture, tropical scenery, coconut wind and sea charm, and ancient pottery.

Haikou is located in the tropics, and the Nandu River, the longest river in Hainan Island, passes through the middle of Haikou City.

Sanya, known as Yazhou in ancient times, is located at the southernmost tip of Hainan Island. It is an international tourist city with tropical coastal scenery.

Tianya Haijiao, Luhuitou, Nanshan Scenic Area, Yalong Bay and other famous tourist attractions gather here, waiting for a beautiful encounter with you in the distance.

The Songtao Reservoir of Danzhou City originated from Wuzhi Mountain and flows through Baisha into the territory of Danzhou.

The entire reservoir has a water area of ​​130 square kilometers and a shoreline of 544 kilometers. It was built in 1958 and took 10 years to complete. It is one of the largest earth dam projects in China.

The ancient ferry on the bank of the Wanquan River in Boao, Qionghai, is "reserved passengers".

There are many tourism and cultural resources in Qionghai.

The Wanquan River flows through Qionghai and is an unpolluted tropical river in China with a beautiful ecological environment. It is known as China's "Amazon River"; Qionghai Boao is also the location of the permanent site of the famous "Asia Forum".

The Fulongyuan site is the largest Neolithic site discovered in Hainan Province.

The site is located only 2.5 kilometers from the estuary of Beili River in Dongfang City.

You can taste the original aesthetic consciousness of the ancestors in the unearthed pottery.

Huangshan Scenic Area in Anhui cleared up after snow, covered in silver, clouds and mist.

The aerial photography of Xieshan Island in Poyang Lake is half the "snow mountains" and half the woods, which is magnificent.

The scenery along the construction project is beautiful.

Dujiangyan, the "national 5A tourist attraction", is a highlight along the way, where you can feel the precipitation of history and the weight of time.

The spring is strong in Wenchuan, Sichuan, and the red plum blossoms.

In "Natural Oxygen Bar" Wenchuan, you can enjoy unique short-distance tourism and urban vacation and leisure travel that integrates nature, ecology, Tibetan and Qiang folk customs; you can trace the world's oldest Qiang culture and gorgeous Qiang embroidery; appreciate the experience Qiang Village, Diaofang and Qiong Cage that have not fallen for a thousand years.

Passing through Li County, you can also experience the original ecological scenery of Folding Miyaluo and Bipenggou, one of the largest red leaf scenic spots in my country, and taste the ancient mythical mineral water of Guergou.

The "third pole" of the world-Tibet is a magical and beautiful place. It has always been a Buddhist holy place that many people yearn for.

However, the steep terrain, mountains and rivers once blocked its connection with the outside world.

Through the joint efforts of many parties, my country has built the Sichuan-Tibet Highway and the Qinghai-Tibet Highway with a total length of more than 4,360 kilometers on the roof of the world, enabling the Tibetan people to use modern transportation to replace the extremely backward transportation that has been used for thousands of years. This has opened a new chapter in the development of Tibet’s transportation industry.

A bunch of sunset clouds in Golmud on the Qinghai-Tibet line shone on the roadside cliffs.

With towering snow-capped mountains, glaciers, virgin forests, and green meadows, I believe the scenery of the Sichuan-Tibet and Qinghai-Tibet highways will make you linger.

The G30 Lianhuo Expressway traverses the central region of my country and is the longest expressway in my country.

It has opened up the highway passages in the northwest, the central plains and the east coast, and is the famous Eurasian Continental Bridge passage.

Lianhuo Expressway traverses east and west, and there are countless beautiful scenery along the way.

There are already more than 1,500 years of history, such as the sacred place of Buddhism and Wushu, Shaolin Temple, the Longmen Grottoes, one of the three major stone carving art treasures, and the Yinxu, the first capital site to be confirmed in Chinese history, and other culturally strong national 5A-level tourist attractions. There are also national key scenic spots such as Mount Jigong, known as the “Museum of Architecture of All Nations”, Sailimu Lake, known as “the last tear of the Atlantic Ocean”, and Mount Tongbai, the source of inspiration for the creation of “Journey to the West”.

"The body is not moved, the heart is far away", the most beautiful scenery is always on the road.

Let us follow the pace of spring, wash our souls in the picturesque scenery, and set off together to poetry and the distance.