China News Service, Chengdu, March 21 (Zhang Fan and Zhang Lang) Starting from March 20, the sacrificial area of ​​the Sanxingdui site has announced the results of a new round of excavations. Among the six newly discovered "sacrifice pits" of the Sanxingdui culture, there are more than 120 ivory that have been proven in Pit 3. The Jinsha Site, which is also the site of the ancient Shu civilizati 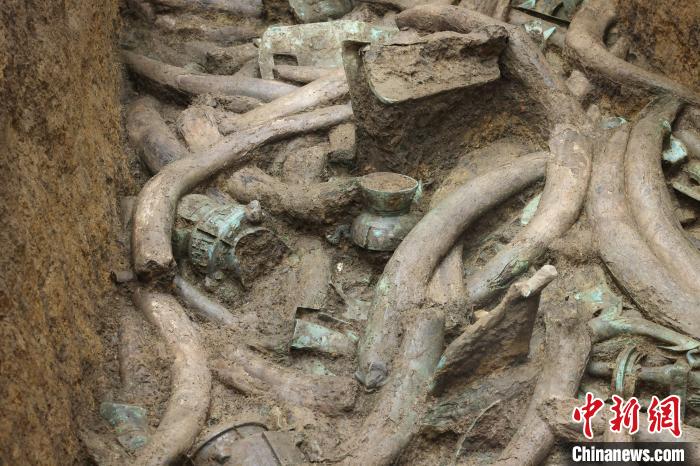 China News Service, Chengdu, March 21 (Zhang Fan and Zhang Lang) Starting from March 20, the sacrificial area of ​​the Sanxingdui site has announced the results of a new round of excavations.

Among the six newly discovered "sacrifice pits" of the Sanxingdui culture, there are more than 120 ivory that have been proven in Pit 3.

The Jinsha Site, which is also the site of the ancient Shu civilization, unearthed a large number of layered and densely distributed ivory during archaeological excavations in 2001. Why do the ancient Shu people have a soft spot for ivory?

How to protect these ivory?

What cultural protection measures will be taken in the future?

With the deepening of archaeological excavations, more than 100 complete ivory, tons of ivory segments, ivory tips and other ivory products have been unearthed in the sacrifice area of ​​the Jinsha Site.

Except for the Sanxingdui and Jinsha sites, archaeological excavations in other parts of China have not found such a concentration of ivory.

Experts speculate that before the construction of Dujiangyan on the Chengdu Plain, the river was flooded for a long time.

The jade zhang with ivory pattern on the shoulders unearthed at the Jinsha site depicts two groups of portraits with high crowns, square ears, robes and ivory on their shoulders.

This pattern is similar to the pattern on the jade border zhang of the Sanxingdui "Mountain Sacrifice Picture", and clearly shows people the scene of the ancient Shu people using ivory to perform sacrificial activities.

Such a huge amount of ivory is both a surprise and a challenge for archaeologists.

According to Sun Jie, deputy director of the Chengdu Institute of Cultural Relics and Archaeology, the ancient Shu ivory is still in the middle stage of the evolution from fresh ivory to fossil ivory.

Among them, inorganic substances give ivory hardness and rigidity, while fibrin gives ivory elasticity and toughness.

During the burial process for more than three thousand years, the binding protein in the ivory has been degraded.

Almost all ivory forms a large cavity from the root to the tip of the tooth.

Therefore, the ivory unearthed in the archaeological excavation that looks complete and solid is actually completely filled with moist sand. Once exposed to the air, it will quickly "loss of water" and crack.

Coupled with the erosion and degradation of light, microorganisms, the surface of ivory will quickly change color, cracks will widen, and even new fractures, mildew and other diseases will occur.

This is why the unearthed ivory is not easy to preserve.

It is reported that after a large number of ivory was found at the Jinsha site, cultural preservation workers immediately carried out pre-reinforcement treatments on the crispy ivory-applying reinforcement, wrapping plastic wrap, etc., while pouring plaster on the outside of the plastic wrap to support the huge ivory Only then can the fragile ivory be unearthed, providing a basis for further research in the laboratory.

Until today, there is no more mature and safe method in the cultural relics protection circle that can be used to protect ancient Shu ivory.

According to reports, at the same time that more than 100 ivory were newly discovered at the Sanxingdui site, the ivory sealed in silica gel at the beginning of the excavation at the Jinsha site has been around for 20 years, and the color of the silica gel has changed significantly.

At present, the Jinsha Site Museum plans to take out the ivory, refill the silicone, and re-examine the original silica gel composition to reassess the safety of this protection method.